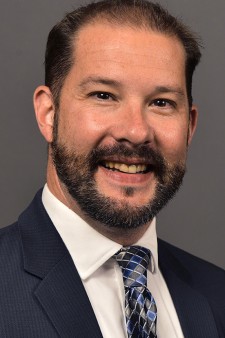 KALAMAZOO, Mich.—Dr. Edwin Martini has been appointed associate provost of Western Michigan University's Extended University Programs. Martini, a professor of history, has served as the interim associate provost of EUP since September 2018. Prior to that, he was second in command for three years as the unit's associate dean. His new appointment took effect April 1.

"I am incredibly thrilled and humbled to be asked to lead EUP on a long-term basis," says Martini, who first joined WMU in 2005 as a faculty member in the Department of History.

"We have a talented and dedicated team that helps lead change, solve problems, and nurture partnerships across and beyond our University. During this time of change across higher education, it's more critical than ever that we realize our mission of innovation, access and outreach for the University."

When Provost Jennifer Bott appointed Martini interim associate provost of EUP last fall, she noted that he was the right leader to see the unit through a transitional period.

"He has provided tremendous leadership in his time at EUP and is a seasoned administrator with demonstrated successes," Bott says.

"Over the course of this year, with more change coming to the unit and to the University, it became clear to me that the best choice for EUP and WMU was to make Dr. Martini's position permanent."

As part of the multi-year transition to the University's new Strategic Resource Management budget model, EUP will begin transitioning to its new role as a service unit, supporting the development and delivery of academic programs while continuing to drive innovation across and beyond the University.

"Given the timing of our new budget model implementation and the shifts within EUP, it's important to maintain continuity of leadership within the unit at this time," Bott adds.

"Dr. Martini brings to this position not only his leadership and vision for EUP, but also long-standing collaborative relationships across the campus and the communities WMU serves that will be of great value during transitions."

During his time in EUP, Martini has overseen the development and launch of more than a dozen new academic programs, including innovative and interdisciplinary programs in information security as well as graduate certificates in unmanned aerial vehicle-related applications.

He also launched the Collegiate Pathways dual-enrollment program, including a groundbreaking Chinese immersion program with Forest Hills Northern High School in Grand Rapids and an agreement with Aquinas College, also in Grand Rapids, to offer a joint engineering program. In addition, he supported growth of EUP-backed external research grants in environmental sciences and engineering.

"It's an exciting time at WMU, and our team is well prepared to help WMU meet the needs of an increasingly competitive higher education landscape," Martini notes. "Change and innovation are part of our culture in EUP, and we're excited to embrace the challenges that lie ahead."

After starting at the University and the Department of History in 2005, Martini rose through the faculty ranks, gaining promotion to associate professor in 2009 and full professor in 2014. From 2009 to 2012, he served as associate chair of the history department and then as associate dean of the College of Arts and Sciences from 2012 to 2015. He first joined EUP's leadership team in 2015.