Alum over the moon after winning prize in NASA challenge 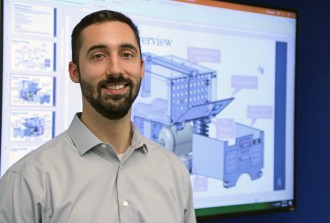 The Western Michigan University alumnus, who received a bachelor's degree in mechanical engineering in 2011, tied for second place in NASA's Recycling in Space Challenge. The space agency wanted to find ways to transport and process trash in zero gravity.

"Places like the International Space Station generate quite a bit of trash," says McFall. "The current method for astronauts to take care of waste that's generated on the ISS or future places is to shuttle it back down to Earth, and that's horribly inefficient."

McFall likens the challenge to creating a "fancy trash can." The St. Joseph native, who now works for SRG Global in Troy, Michigan, says working on the NASA challenge took him back to his days as a mechanical engineering student at WMU.

"I had some courses in college on machine design. This was basically a machine design project on steroids. It might as well have been from my instructor, Dr. Judah Ari-Gur, at Western," laughs McFall. Ari-Gur is a professor of mechanical and aerospace engineering.

McFall's idea involves using a hopper for solid waste and managing air streams for liquid and gaseous waste. He calls his design, which won a $2,500 prize, a microgravity waste management system.

The winning entry, from Aurelian Zapciu of Romania, focuses on pre-processing waste using ejectors to move trash through the system. Ayman Ragab Ahmed Hamdallah of Egypt tied with McFall for second place with a "trash-gun."

"The challenge produced ideas that were innovative and that we had not yet considered," NASA chemist Paul Hintze, a challenge judge, said in a release. "I look forward to further investigating these ideas and hope they will contribute to our human spaceflight missions."

"It's humbling," says McFall. "I'm honored that they would choose my design. It's also good validation for the skills that I've been building since the beginning of school."

NASA started crowdsourcing competitions to develop solutions to space-related challenges in 2011. Challenges and prize competitions are routinely published online at NASA Solve. This is the second challenge that McFall has entered. He says he'll continue monitoring the site for any future challenges that align with his skill set.