Speaking the language of success 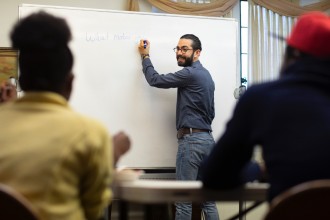 KALAMAZOO, Mich.—Learning another language is difficult in itself. Doing so in a foreign country after leaving your family and home behind is a far more daunting task. Graduate student Deniz Toker has found his passion in helping refugees find their voice.

Toker, who grew up in Turkey, developed an interest in languages early on. After mastering English he became a teacher, helping students learn the language at a private high school. That's where he first learned about Western Michigan University.

"Our school often brought in representatives from American universities to speak with students about the potential to study abroad. WMU happened to be one of them," says Toker. "I was in charge of welcoming and hosting representatives."

Toker says he didn't think much of his interaction with the representative from WMU at first. But a couple of years later, as political turmoil gripped Turkey, Toker found himself looking for opportunities to leave the country and further his professional development. In a moment of serendipity, an email arrived in his inbox.

"I was just looking for an exit for my future and for myself. Out of the blue, at midnight—I'll never forget that moment because it's so special for me—I got an email about a new program at Western Michigan University. It was a master's degree in teaching English to speakers of other languages," says Toker. "I jumped at the opportunity."

FINDING A HOME AT WMU

Toker was accepted into the graduate program in the Department of Special Education and Literacy Studies in the fall of 2017. He says the support he received from faculty members immediately made WMU feel like home.

"Since the first day I came here, they've been so supportive of me in many ways," says Toker. "It's such an amazing opportunity for me because I've never felt like an outsider. I was lucky to be working with these people and have their support."

Toker secured a job as a research assistant within his department. On top of helping him fund his studies at WMU, the position also gave him unique opportunities for real-world learning, observing teachers in classrooms across Michigan.

"The experience really opened my eyes. I was able to see English learners and the problems they face in today's classrooms, and that helped me find my passion in academia," Toker says. "The observations and my readings, everything just paved the way for me to find my niche in culturally responsive teaching."

Toker also shared what he learned with other professionals, presenting at high profile Teaching English to Speakers of Other Languages—TESOL—conferences.

While exploring opportunities to teach while he studied, Toker was connected to Bethany Christian Services. He began volunteering with the organization, teaching English to refugees in West Michigan. The experience eventually led to a part-time job.

"My teaching is more than teaching English. It's about life skills and helping students find their voice," says Toker. "This is why I actually exist. I don’t think I'd be able to do this job if I didn't have that positive impact on the lives of my students or the community."

After graduation, Toker plans to move to Canada to continue teaching English to refugees. He's also in the process of applying for teaching positions at institutions of higher education in Montreal.

"I believe there will be many opportunities for me to practice my skills and apply everything I've learned here at WMU."