Business student ready to get into the game at Nike 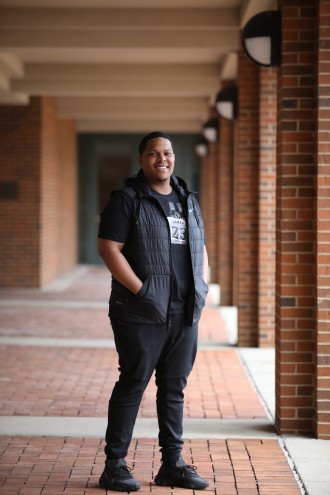 Donte' Tuggle will work at Nike headquarters after graduation.

KALAMAZOO, Mich.—A flurry of activity in the weeks leading up to graduation will end with a swoosh for Donte' Tuggle. The Battle Creek native, who is graduating with a Bachelor of Business Administration in human resource management, will hit the road on a cross-country journey to the Nike headquarters in Beaverton, Oregon.

Tuggle raced to the head of the pack during a rigorous recruiting process to land what he calls a dream job.

"Growing up, I was a Nike fan. My favorite athletes are endorsed by Nike," says Tuggle. "It's a long distance away, but it's a once-in-a-lifetime opportunity."

Tuggle will be a human resources associate at Nike. It's a field he knew he wanted to go into when he was in high school, and one of the major reasons he chose WMU.

"Being local was important to me, but I knew that WMU had a great business school as well. So the prestige was a big draw," says Tuggle.

The diversity of classes in the University's bachelor's degree program in business administration set Tuggle up for success when it came time to start applying for jobs.

"Having to take all of the business courses and really hitting every aspect of a large company helped prepare me to be a well-rounded HR representative," says Tuggle. "Whether it's employee relations or staffing or the law side of human resources, having a background in all of that really sets me apart from other graduates competing for jobs."

Membership in the Society for Excellence in Human Resources also provided Tuggle with a strong foundation as he began the job search in October. The organization hosts various networking and professional development opportunities for students.

"I think just talking to employers and being face to face with recruiters and established professionals in the human resources field was a huge benefit, because gaining that knowledge and building a professional network is key." 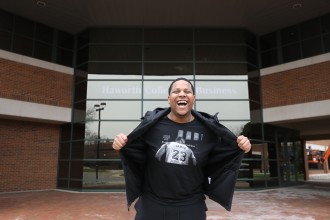 According to a survey of recent WMU graduates, 98% had at least one instructor who made them excited about learning and 70% had a mentor who encouraged them to pursue their goals and dreams. For Tuggle, those professors were Dr. Christina Stamper and Dr. Jennifer Palthe.

"They just kept encouraging me and supporting me from the first time I had classes with them," says Tuggle. "Dr. Stamper became an advisor for SEHR and took me under her wing, kept me motivated and supported me. She kept saying 'the sky's the limit, dream big.' It's a great benefit to have that support system."

Tuggle looks forward to continuing to grow at a company he really believes in.

"The culture's really great at Nike. It's very positive, very supportive and very energetic. I told my parents it's a millennial's dream!"