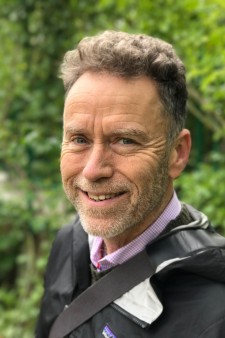 KALAMAZOO, Mich.—Medieval scholars from around the world will return to Kalamazoo this month for the 54th celebration of the Western Michigan University International Congress on Medieval Studies.

The event, which has become a rite of spring in the Kalamazoo community, runs from Thursday, May 9, through Sunday, May 12. It will attract some 2,750 scholars from around the world. Among the attractions this year are sessions on topics ranging from medieval herbal medicine and military technology to Norse mythology.

The event will feature more than 550 sessions in locations across the WMU campus. The sessions are in a variety of formats, many taking the form of academic paper presentations. Others are panel discussions, roundtables, demonstrations and workshops.

An annual lecture on the reception of the classics in the Middle Ages will be given by Dr. David Townsend of the University of Toronto. He will address he question of "Mentioning the Unmentionable: 'Praeteritio' and the Legacy of Roman Satire in Aelred of Rievaulx" at 7:30 p.m. Thursday, May 9, in the Fetzer Center's Kirsch Auditorium. The lecture series is endowed in memory of Archibald Cason Edwards Sr. and Sarah Stanley Gordon Edwards.

Special plenary lectures are scheduled for 8:30 a.m. Friday and Saturday, May 10 and 11, in the Bernhard Center's East Ballroom:

The Mostly Medieval Theatre Festival is a biennial performance festival showcasing and invigorating the global heritage of drama, music, dance and performance styles from late antiquity through the Renaissance. Performances will begin at 8 p.m. Wednesday through Saturday, May 8-11, at the Gilmore Theatre Complex and be followed by a talkback—an opportunity to ask questions and share knowledge among the audience and performers.

On display in Waldo Library will be 21 manuscripts on loan from Les Enluminures as part of their "Manuscripts in the Curriculum" program. Dating from the Middle Ages and later, they include a variety of Christian religious texts, an early French register of oaths, an illustrated treatise on heraldry, an Elizabeth genealogy of royalty and a calligraphic alphabet. 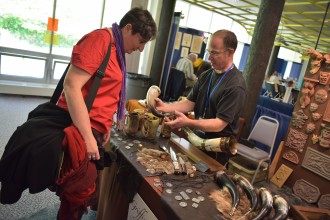 The exhibits hall is a gathering place for visiting book dealers, publishers and sellers of medieval sundries, from souvenir T-shirts and tea towels to hand-crafted musical instruments and jewelry.

The exhibits hall is a favorite gathering place for Kalamazoo residents, as well as the visiting book dealers, publishers and sellers of medieval sundries, from souvenir T-shirts and tea towels to hand-crafted musical instruments and jewelry.

Kalamazoo County residents and those with a valid WMU ID may attend the WMU International Congress on Medieval Studies at no cost. Local attendees may register on-site in the lobby of the Goldsworth Valley 3 residence halls if they have not pre-registered.

The Medieval Institute is a center for instruction and research in the history and culture of the Middle Ages and ranks among the top 10 North American institutes, centers and programs that focus on medieval studies. Its pioneering function was to introduce the first Master of Arts in medieval studies offered at a state-supported university in the United States. The medieval congress began as a biennial conference in 1962. Sponsored by WMU's Medieval Institute, also established in 1962, it grew to become an annual event in 1970 and celebrated its 50th anniversary in 2012.