Three football Broncos earn chance to compete at next level

"I'm proud of these three seniors," says head coach Tim Lester. "We only had nine seniors last year, which is an all-time low. Even with our young team nucleus, these three still showed that they have the ability to play at the next level."

"John Keenoy is probably the smartest football player I’ve ever been around," says Lester. "His ability to get us into all of the right calls for four years straight is special. We are excited to watch him at the next level with the Vikings."

The Cleveland Browns invited Miller to their rookie minicamp. The Gull Lake High School graduate started his Bronco career as a walk-on defensive lineman. He eventually transitioned to tight end and earned a full scholarship his sophomore season. Miller's blocking prowess earned him the nickname "The Great Wall of Odell." An exercise science major, Miller was a three-time Academic All-MAC selection.

"Odell Miller is a force in the run game. He played tight end for us, but is projected as an interior offensive lineman in the NFL," Lester says. "The Browns understood his huge upside as he moves positions heading into the next level." 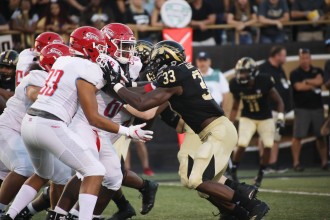 Assoua—who was born in the Netherlands—impressed scouts with his speed at WMU's NFL pro day. The Oakland Raiders invited the defensive lineman, a sport management major who recorded a career best 4 1/2 sacks his senior season, to their minicamp.

"Eric Assoua has great length and has huge position flexibility," says Lester. "He can play with his hand up or down. The Raiders will have a special skill set to develop when Eric arrives."

These minicamps are just the first in a series of hurdles the players will have to clear to land a spot on an NFL roster. Whatever happens, Lester will be watching with pride.

"This is a dream come true to them," says Lester. "As their coach, it is fun to watch them earn this chance."