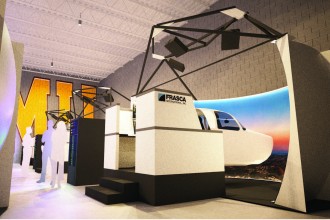 The WMU College of Aviation's new instructional building will include state-of-the-art simulation technology.

Groundbreaking for the new 67,000-square-foot instructional facility at the W.K. Kellogg Airport in Battle Creek May 10 drew praise by local economic development partners.

"Battle Creek Unlimited has enjoyed a close relationship with Western Michigan University's College of Aviation for over 20 years. Today, we are thrilled to see the College of Aviation break ground on its new state-of-the-art multimillion-dollar Aviation Education Center that will propel them to new heights. It is exciting to know that the next generation of pilots and aviation technicians will be trained and educated right here in Battle Creek," says Joe Sobieralski, president and CEO of Battle Creek Unlimited. "This is not only great for Western Michigan University, but it is also great for Battle Creek--it doubles-down on one of Battle Creek’s most strategic assets on the economic development front."

Completion of the $20 million building project—including a $15 million grant from the state—is expected in summer 2020, with classes beginning in the new space the following fall.

The college has seen its enrollment grow 35 percent in the past five years to about 1,000 students as high job growth and demand for aircraft pilots, aircraft technicians and management place WMU in the position to be Michigan's major resource to prepare students for these jobs, says the college's dean, Dave Powell.

"We will increase our classrooms from four to 10, greatly improving the scope of our instruction and research capabilities," Powell says, adding the center will be built to LEED Silver standards. "The needs of our industry are tremendous, and these trends are expected to continue as projected increases in passenger traffic fuel the demand for these highly skilled, highly paid industry jobs."

It is anticipated that future demand for pilots, airline managers, administrators and maintenance personnel will significantly increase as the current workforce ages out of the marketplace and global demands for skilled aerospace professionals increases.  The Federal Aviation Administration projects that total airline passenger traffic is expected to double by the year 2032, and a recent Boeing Pilot and Technical Outlook report forecasted that by 2034, the aviation industry will need to supply more than 1 million new aviation personnel, including 558,000 pilots and 609,000 maintenance technicians. 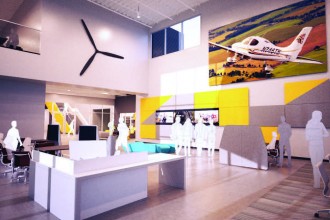 Construction on the new center is expected to finish in summer 2020, with classes beginning in the space the following fall.

The aviation jobs needed to fill this gap are high skilled, high quality and well compensated.

WMU's College of Aviation is among the oldest such academic units in the nation, beginning in 1939 and evolving over time from a single program to its current status as a full academic college in July 1999. It has been located at the W.K. Kellogg Airport in Battle Creek since 1997 and has been the site of nationally recognized intercollegiate flight teams and state-of-the-art flight and technical training initiatives and important research undertakings.

Consistently ranked as home to one of the nation's top three collegiate aviation programs, WMU offers undergraduate programs in aviation flight science, aviation management and operations, and aviation technical operations. The college serves as an anchor for the W.K. Kellogg Airport in Battle Creek along with Duncan Aviation, Waco Classic Aircraft Corp. and Centennial Aircraft Services.