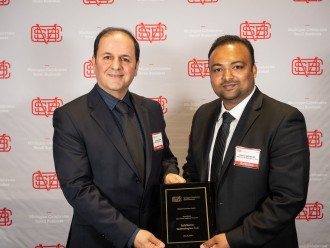 "The award demonstrates that early stage emerging companies can succeed with the help of the Michigan Small Business Development Center tech team and the larger ecosystem as a whole," says Dr. Binu Baby Narakathu, a WMU alumnus and co-founder and president of SafeSense Technologies LLC.

According to a letter from Gov. Gretchen Whitmer, SafeSense was selected by its local SmartZone for demonstrating "growth through technology commercialization and success with innovation."

"SafeSense demonstrates exactly what WMU is trying to do from a tech transfer standpoint," says Steve Tokarz, a mentor-in-residence at the University. He has been helping guide the company's success outside WMU through the University's Technology and Innovation Advancement office.

SafeSense is an outgrowth of the substantial research conducted at WMU that results in new findings, developments and discoveries that hold the power to benefit society. The transfer of these discoveries to the commercial sector is coordinated through Technology and Innovation Advancement. 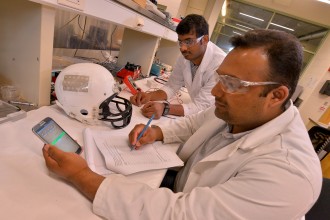 Narakathu and a colleague work on technology in the lab.

SafeSense--housed in the WMed Innovation Center--launched in 2014, but it was born in a WMU engineering lab years earlier. Narakathu was a doctoral student at the time. He and three other students worked with faculty advisor and company co-founder Dr. Massood Atashbar, a professor of electrical and computer engineering, to develop technology that, when incorporated in a football helmet, could measure the location and intensity of blows to the head. At a time when football concussions were beginning to make headlines, the concept quickly garnered interest.

The sensors have potential for more than just injury detection. They have the ability to enhance sports performance, as well.

"Recently a ruling came out to limit the number of hits high school football players can get at practice. But what type of hits are we limiting? What's the number of hits they see? And when they hit, are they doing it correctly?" asks Tokarz, who says coaches and trainers can use these sensors to detect dangerous habits in players and correct them. "If you're learning how to hit the correct way in practice, you're going to play better and safer during the real game."

SafeSense is on track to begin commercially marketing its sensor system for helmets in 2020. Tokarz says the company is looking at the possibility of expanding its sensor technology into other arenas and also is actively seeking collaborative opportunities.