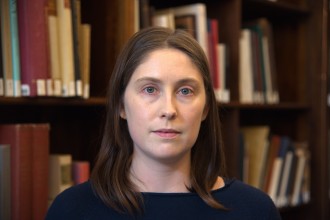 KALAMAZOO, Mich.—A scholar of medieval art and architecture has won Western MIchigan University's Otto Gründler Book Prize for her book on the reception of the architecture of Christian Holy Land in the imagination of pre-modern Europeans.

Kathryn Blair Moore, an assistant professor of art at Texas State University, is the winner of the 2019 Gründler Prize for "The Architecture of the Christian Holy Land: Reception from Late Antiquity through the Renaissance." The prize, which comes with a $1,000 cash award, was announced at the 54th International Congress on Medieval Studies—one of the largest annual gatherings of scholars of the Middle Ages, which is held on the WMU campus.

The prize is named for the late longtime director of WMU's Medieval Institute and has been awarded annually since 1997. It recognizes a monographic book on a medieval subject that the selection committee determines has made an outstanding contribution to the field. Authors from any country are eligible, and nominations are accepted from readers and publishers.

Moore's book is a provocative analysis of accounts of pilgrimages to the Holy Land ranging chronologically from late antiquity to the Renaissance. Those accounts, according to Moore, were designed to present the holy sites to a readership that was unlikely to visit the sites themselves. Moore shows how the written accounts allowed readers to imagine the places and spaces with an appreciation of their symbolic importance, revealing European perceptions of buildings in the Holy Land.

"Moore analyzes the narratives that describe the buildings, as well as the liturgical habits and devotional practices that informed their reception," said Jana K. Schulman, director of WMU's Medieval Institute, in reading this year's award citation. She characterized the book as "well presented, well argued, and well deserving of the 23rd Otto Gründler Book Prize."

Published by Cambridge University Press in 2017, Moore's generously illustrated book was already the recipient of the American Association of Publishers' 2018 PROSE Award for Art History and Criticism.