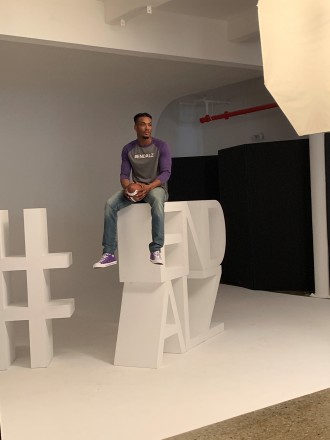 Sam Beal, now a cornerback for the New York Giants, is teaming up with the Alzheimer's Association in its effort to end Alzheimer's disease.

"If I can lend my image and open the eyes of my fan base to what the Alzheimer's Association is doing, it's great to be part of that," Beal says. "I would love to be that voice and be out there showing that I’m supporting beating this disease."

The "#ENDALZ" photo campaign is being rolled out in June to coincide with Alzheimer's & Brain Awareness Month. He joins celebrities like actress Rita Wilson, Olympian Laurie Hernandez and singer Grace Potter in the effort to raise awareness and funds to end the disease.

Beal grew up in Grand Rapids, Michigan, where he watched his mother work as a caregiver for elderly patients. She recently retired, but the stories she told left an impression.

"I used to always hear about her favorite people to work with and the challenges patients faced," says Beal. "Those stories were her way of teaching us to be grateful for what we have."

The Giants added Beal to their roster after the 2018 NFL supplemental draft. A season-ending shoulder injury took him out of the mix before the season even started. Beal says he's worked hard over the past year and, after getting the okay from doctors, is ready to hit the ground running this season. Persistence and perseverance are qualities he cultivated at WMU.

"I had people in my corner—coaches and trainers who reminded me how fast things can change and how important it is not to give up," says Beal. "You just keep trying and if you do that, it will work out. I had to learn that myself." 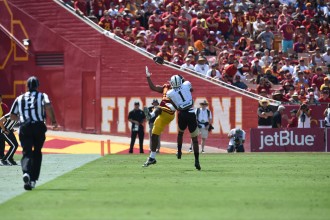 Beal defends a pass while playing for the Broncos. (GS Photo)

"Sam is an extremely talented player, but what strikes me most about him is his work ethic," says WMU football coach Tim Lester. "It's great to see him not only excel on the field, but also use his platform to do good."

Lester says he works to instill that sense of responsibility in everyone on his team.

"One of our sayings is, 'Our town. Our team.' Giving back is extremely important," Lester says. "Our players are all required to complete community service. Most of them meet that requirement and quadruple it."

While Beal accomplished a feat many young athletes only dream of—playing in the NFL—he still has one more goal.

"I want to finish school. I want to be that role model for my younger brother."

Beal was drafted after his junior year. He says his injury delayed the process, but he plans on completing his bachelor's degree in criminal justice.

"I always thought I'd join the Marines after graduation and eventually join the FBI," says Beal, who instead was afforded the opportunity to pursue his passion on the field.

Beal understands the responsibility that comes with being a professional athlete and the potential for impact far beyond the field.