KALAMAZOO, Mich.—The exploration of Mars and potential for humans to travel and live there has sparked research at Western Michigan University to better map the terrain of the planet.

Four senior aerospace engineering students spent the school year developing designs for a flying unmanned aerial vehicle to map the surface in detail and transmit that information to researchers in a timely manner. Maxwell Allen of Harrison Township, Stephen DeCarlo of Hudsonville, Joseph DiGivanno of Lansing and Nathan Partee of Breckenridge featured their results along with 95 other senior capstone projects showcased at the University's Senior Engineering Design Conference held this past spring. 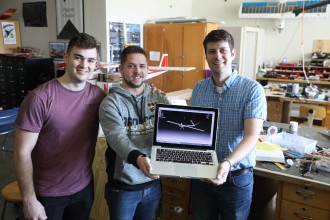 The exploration of Mars is a major interest for the space community, says the project's faculty advisor Dr. Kapseong Ro. However, current technology, such as the surface rover, is slow and isolated to certain areas of Mars. And satellites orbiting the planet cannot get the same image quality as equipment on the surface.

A major challenge to collecting data from overhead is that Mars has an atmosphere with a density of around 1 percent of the Earth's, making it more difficult to fly and navigate a UVA, he adds.

"NASA has been looking at Martian mapping since the late 1990s, but we haven't seen a lot of progress in the form of engineering because of the unique circumstances of the planet," says Ro, WMU professor of mechanical and aerospace engineering. "It is very hard to replicate the Martian atmosphere on earth. We use air density to produce thrust, and our students have had to accommodate for the differences in the Earth's and Mars' air density."

"I don't know if we have the best technology yet, using known materials. We had to make some assumptions based on what we would need to make the project successful," he says.

The project outlined a mission to scatter 10 drones, all encased so they wouldn't burn up in the carbon dioxide-rich atmosphere. Each drone was designed with a wingspan of nine meters to carry a less than two-kilogram device. Once the drones reached a certain height, they would unfold and scan the surface at 100 times per second to produce a 3D image. This would cover significantly more ground than the rover and at a closer range than satellites currently manage from hundreds of kilometers away.

With the anticipated cost of these drones in the millions of dollars, students relied on computer simulations and programming to test their theories.

The project gave students the unique opportunity what could be possible in the growing field of space exploration, adds Ro. WMU is one of only two universities in Michigan to offer an undergraduate degree in aerospace engineering.