"It feels great. It was an awesome ceremony,"  DeKeyser says of the emotions he experienced while walking across the stage at Miller Auditorium Saturday, June 29, to receive his diploma.

WMU hockey coach Andy Murray makes academics a priority in his program, proudly recognizing a number of former Broncos who've made a commitment to finish their education after joining the professional ranks. 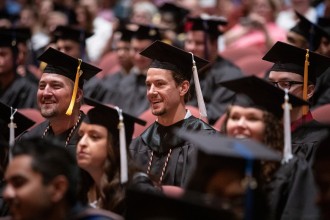 DeKeyser sits in the audience with fellow graduates at Miller Auditorium.

"I'm just as excited for Danny graduating as I was when he played his first game in the NHL. I think it's special," says Murray. "It's a testament to his family as well. I don't think there was a chance his mother was going to let him not finish. Danny's a focused young man, so our whole program is excited."

A standout on the ice, the defenseman left school near the end of his junior year when he was signed by Detroit—a team he'd idolized since he was a child.

"Our season had gotten done a couple weeks before, and I looked at myself and I was on the ice at Joe Louis Arena," says DeKeyser. "My head was spinning a little bit, but I didn't really have too much time to think, so that's probably a good thing."

DeKeyser made the jump from the college to professional ranks look easy, earning Rookie of the Year honors his first full season with the Red Wings and signing a six-year, $30 million contract in 2016. Yet, in the back of his mind, he knew he wanted to finish his degree.

"I had been in the league a few years, had established myself. I didn't have any kids at the time. Really all I was doing was focusing on training for hockey and skating in the summer," says DeKeyser. "I thought it would be a good time to start it back up."

"I think of Danny's young family now. What an example he's just set for his kids," Murray says. "He's making over $5 million a year playing hockey, but he found it important enough to get his degree." 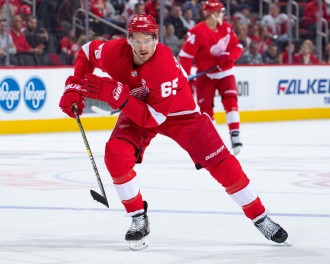 In 2017, with the help Jim Culhane, director of major gifts and former WMU coach, and Jeff Stone, associate athletic director for academic services and compliance, DeKeyser enrolled in classes.

"They were able to guide me on the right path. I was able to talk to counselors, see what the best route was for me and pick classes, that kind of thing."

"Broncos for life is our goal," says Beauregard. "It's really an honor to see those who do want to finish. He had a dream of a lifetime to be able to play for his dream hockey team, but at the same time he was able to commit to finish that degree. That's really what's it's all about."

"It's flexible, it's fast and can help save busy working adults time and money towards their degree," says Martini. "A lot of people say, 'Someday I'm going to finish my degree. Someday my kids will be out of the house and I'm going to go back and get my degree.' Well, welcome to someday."

According to Martini, more than 1.2 million adults in Michigan have completed some amount of college without obtaining a degree. Realizing every student has different personal and professional needs, EUP offers flexible options to help reach the finish line.

"We had a student last year who was 85 years old who graduated with a university studies degree," Martini says. "Our presidential scholars the last couple of years have been working moms who set aside their own personal goals to take care of their families and their children, and now it was their turn. And then we've got somebody like Danny who wanted to go realize his dream of becoming a professional hockey player, but he didn't want to lose track of how important it was to finish that bachelor's degree." 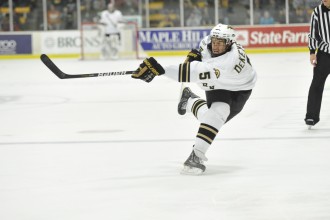 DeKeyser played three seasons for WMU before signing with the Red Wings in 2013.

Students enrolled in EUP can take as many or as few credits at a time as they choose, while taking classes on main campus, regional campuses or—like DeKeyser—entirely online.

"When we travel, we have a little bit of down time in hotels or on plane rides, so it gave me something to do and kept me busy while I was on the road,"  DeKeyser explains.

Juggling professional and student life—and having a new baby right in the middle of it all—wasn't easy.

"There were a few times where it was tough and I thought, 'I don't want to do this.' Getting in at 3 a.m. on the road and the next day we'd have practice, and then I'd have to do homework. It was definitely different than what I was used to," says DeKeyser. "But, overall, I liked it and enjoyed learning." 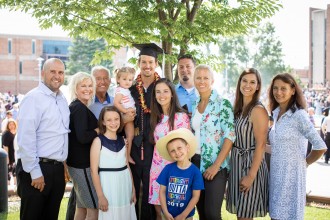 DeKeyser has several Bronco alumni in his family, including his wife and two sisters.

Bronco blood runs in DeKeyser's family. He has two sisters who graduated from WMU, and he's married to a fellow Bronco student-athlete.

"For me it's just a second home," DeKeyser says. "I love being at Western. I love Kalamazoo. It's a great city. I met a lot of great people here that really helped me along the way these past nine years."

His wife also helped encourage him to finish his degree.

"In her office she has her diploma hanging, and I always walk by and notice it," DeKeyser says. "I told her one day I’m going to put mine up right next to it. So, it's pretty cool."

DeKeyser recognizes his position as a role model, both in the hockey arena and at home.

"Having a daughter now, I want her to get the most schooling that she can. I'll always push her to hopefully get a college degree one day. I also tell any college guys that I know now that are leaning toward maybe leaving after three years to make sure that they push themselves to try and finish up." 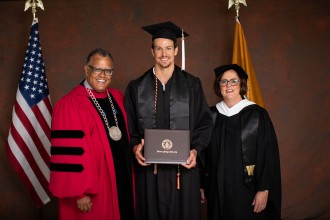 Murray says more than 80% of college hockey players who complete at least three years of school will go on to finish their degree. The coach takes pride in knowing many of his student-athletes do make the commitment to continue their education.

"All four players that graduated from our team this year played pro hockey at the end of the year. They were far enough ahead in their courses that their professors said it was fine," says Murray. "They went and played pro and then took care of their finals. All four of them graduated on time."

The emphasis on education is something Murray works to instill in all of his players. The Bronco hockey team consistently ranks among the top teams in the National Collegiate Hockey Conference in terms of academic performance. 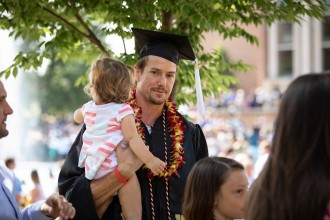 Now a college graduate, DeKeyser is excited to be able to focus on hockey and being a dad.

"We take a great deal of pride in academics. When our student-athletes make a commitment to us, their families are making a commitment to us, and we want to make sure that they realize the importance of parallel career paths," Murray says. "Doesn't matter if you've got $60 million in the bank, you've got the rest of your life to live."

While he wants to play hockey for as long as he can, DeKeyser knows his degree could play an important part in his future, which might include coaching at the college level.

For now, he's just relieved to have reached his graduation goal.

"It's a weight off my shoulders," DeKeyser says. "Now I just have to worry about playing hockey and chasing my daughter around the house."