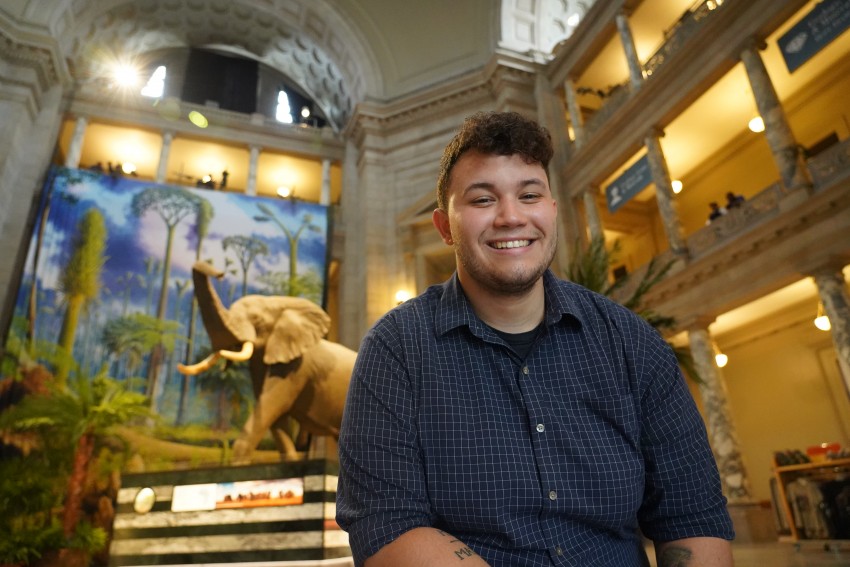 Tre Goodhue sits in the rotunda of the Smithsonian National Museum of Natural History. It's one of several museums he's helping create sleepover programming for during a summer internship.

WASHINGTON, D.C.—A history student by day, Tre Goodhue has become a magician of sorts, bringing the magic of the Smithsonian museums to life at night for kids from all over the world.

"It's kind of a childhood dream come true," says Goodhue, a native of Britt, Iowa, who came to WMU to pursue a master's degree in public history because the University offers one of the oldest and most renowned such programs in the country.

"This is the largest museum education programming institution in the world," says Goodhue. "Getting to be part of it and learn from the individuals who do these programs for hundreds of people every weekend at some of the largest and most revered museums in the world is amazing."

"When I tell everyone where I’m working, they say, "Oh, like 'Night at the Museum?'"

While he doesn't have to play fetch with a Tyrannosaurus rex skeleton or keep a mischievous monkey from stealing his keys, Goodhue has plenty to keep him busy.

"There's an immense amount of planning to have all the materials ready to be sent to museums, get everything set up once it's in the museums, and coordinate and organize volunteers in such a huge group," he says, 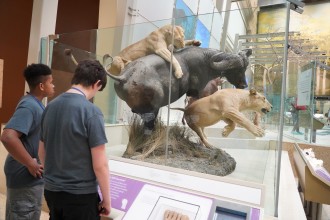 Students observe an exhibit at the Smithsonian National Museum of Natural History.

Goodhue is among a number of associates who work on all aspects of the Smithsonian Sleepovers program, developing activities and crafts, sorting out food and sleeping arrangements and even plotting maps for kids and parents to navigate the museums.

One of the most exciting tasks of Goodhue's internship was the prospect of rolling out an entirely new sleepover experience at the Museum of Natural History.

"The museum opened its new Fossil Hall. It's a fantastic exhibit, definitely worth the hype they’ve been giving it," says Goodhue. "We've been completely revamping that sleepover, from the logistics side of things to educational programming."

A project Goodhue particularly took pride in was a scavenger hunt involving some unique fossils related to various species throughout the museum. Seeing his plans put into action during his first sleepover experience made all of the hard work worth it.

"The kids really enjoy being in the museum overnight," Goodhue says. "Whether they're having fun with the activities or not, they really enjoy having some one-on-one time with the dinosaurs or fossils or other exhibits. It's cool to see that."

A FUTURE IN HISTORY 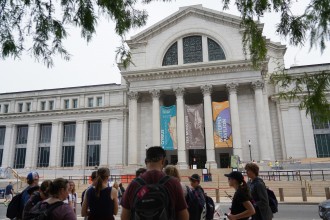 A crowd stands in front of the Smithsonian National Museum of Natural History in Washington, D.C.

Goodhue is excited to build on his experiences with Smithsonian Associates as he works toward obtaining his master's degree and eventually pursuing a career.

"I want to go into museum education and outreach. I want to let people know the museum is somewhere they can come and have these great educational experiences and to make the museum a viable asset for the community that it serves."

By the time his finishes his internship in mid-August, Goodhue will have planned and executed educational programming at four national museums. He's working hard right now to absorb every bit of the experience he can.

"The absolute coolest thing is to get off the train every day and see your office is on the National Mall," says Goodhue. "The luster hasn't worn off."

It's a feeling that will last long after he returns to campus at WMU.

"When I was a kid and I came here, I thought I would see it once and never be back. Now I come to the Smithsonian museums every day. I work in them, work with people to make things happen. There's a lot of stepping back and saying, 'Wow.'"