Mentors, role models key to success for men of color in college 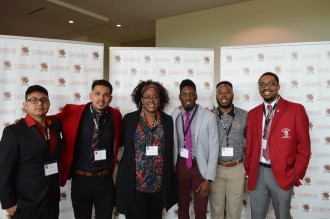 KALAMAZOO, Mich.—Levi Soto started his education at Western Michigan University studying engineering, a field that fit in with his experience helping his father with their family construction business.

He was born in the United States, but his English was limited; and he would stutter with nervousness because he was more familiar with Spanish that was spoken in his home. His language and culture kept him tied to a small circle of Latino friends, and he rarely had Latino instructors to be mentors or role models as he attended college.

"We faced cultural shock and have barriers both with our language and economically," says Soto, who graduated with a bachelor's degree in social work in 2016 and is currently a social work graduate student at WMU. "It was like living two different lives at the same time."

For Jalen Palmore, a recent graduate with a Bachelor of Business Administration in management, most of his immediate family has attended college, so expectations for him were high when he first came to WMU. Palmore did not face challenges with language but, as an African-American man, he also experienced racism and some isolation.

"Men of color in a college setting face obstacles, such as being seen as inferior to their classmates. Some are the first in their family to go to college, and they feel they have to prove to themselves and to their family that they can succeed. But often they go through struggles and can’t express themselves the way they want," Palmore says.

Soto, Palmore and three others from WMU attended a national conference this past spring at Clemson University in South Carolina focusing on the experiences of men of color in higher education.

WMU seniors Irving Quintero and DeVante White, as well as junior Tykese Brown also attended the Third Annual National Clemson Men of Color Summit at the end of April that promoted awareness of changing U.S. demographics and effects on college enrollment and student support. They were joined by Lauren Carney, director of WMU's Kalamazoo Promise Scholars Program, and also received input prior to the trip from Katrina Goodall, campus coach for KPSP.

Soto and Quintero presented "Effectively working with Hispanic/Latino students: Somos el Futuro (We are the future)" at the national summit. 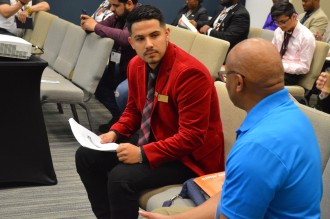 WMU graduate student Levi Soto gets ready to make his presentation with student Irving Quitnero regarding working with Hispanic and Latino students.

The son of migrant workers who traveled from Mexico to live and work in the United States, Soto said his family's strong work ethic and high value placed on education helped him stay committed in school. But there were also barriers, such as language, racism and fear.

"There are many parts of my culture that helped me, such as strong family support. But there are not many men of color who feel comfortable approaching people outside of family," he says.

African-American men also face challenges with a lack of role models and support in higher education.

"Successfully navigating college can be a challenge for most students, and that challenge is made more difficult when a student does not see faculty, staff and administrators who look like them. By not being able to engage on a regular basis with those you identify with, a student can begin to feel isolated and assume that the institution does not value them," says Dr. Candy McCorkle, WMU vice president for diversity and inclusion. "This conference exposes our students to men of color who are experiencing professional achievements and serving in leadership roles so it reinforces to our male students of color that they too can achieve. By returning to the WMU campus, these young men have new tools to begin building their futures."

During the two-day summit, students were taught career and professional development skills and networked with African-American and Hispanic professionals. They also explored "machismo," or masculine pride, that prevents many of students from seeking help when they need it.

Part of the solution involves building a stronger network of groups and mentors for male students of color, providing more translators and bilingual materials for families, and promoting diversity as a strength on campus and in the workforce.

As a volunteer at Kalamazoo El Sol bilingual elementary school and a past intern with WMU's KPSP, Soto is hoping to be a role model for future college students of color.

"It is important for male students of color to find our own self-identity and to be able to express our cultural identity through clubs, activities or important holidays. It allows us to be comfortable with ourselves and with other students," he says. "We need role models, and even one person can make a difference."

Palmore echoed the need for mentors as key to student success.

"Having a mentor, in my mind, would do wonders for men of color. Someone they view as successful and who they can model after; someone who can keep their heads up and have someone to be there for them when things get tough," he says.