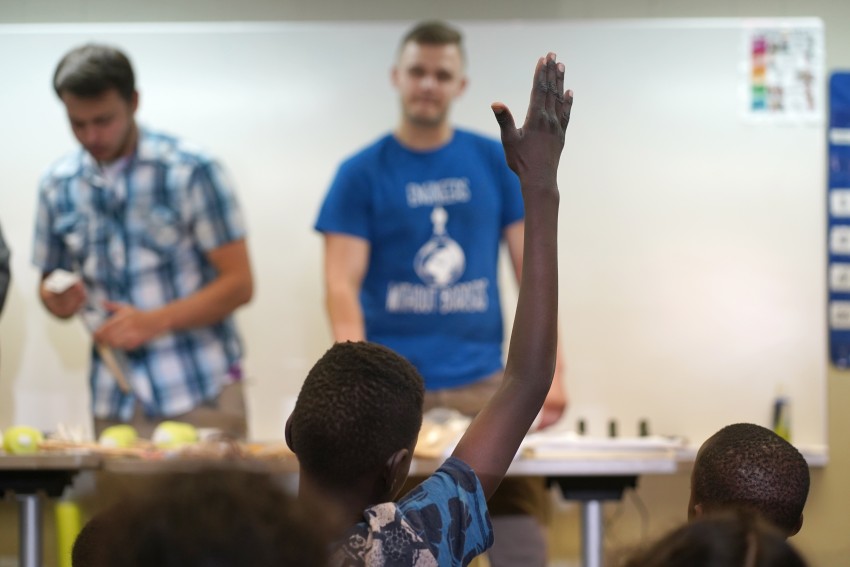 A student at the Refugee Education Center raises his hand during a presentation by the WMU chapter of Engineers without Borders.

KENTWOOD, Mich.—Kids bursting with energy from a long school day dart back and forth across a room. They gather in groups, conversing in various languages. All of these children are refugees, coming from different countries with their families—fleeing obstacles like poverty and violence in search of a better life.

Today, they're finding a common language in science.

Western Michigan University's chapter of Engineers without Borders designed a project for children at the Refugee Education Center in Kentwood, which provides kids in kindergarten through 12th grades after-school tutoring, summer literacy programs, and socio-emotional and career exploration opportunities. 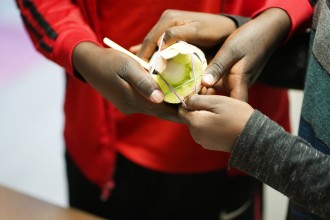 Students make a protective case to cushion an egg that will be dropped off of a balcony.

"It's important to bring in groups like Engineers without Borders to allow the children to experience various career options within science, technology, engineering, arts and math fields," says Alison Kummer, student support coordinator for the Refugee Education Center. "Students need access to hands-on experiences to pique their interest and build confidence in areas of STEAM."

Members of Engineers without Borders crafted a "classic" egg drop project, asking kids to create a vessel to keep the fragile cargo intact while being dropped from a second-story balcony.

"It was something to get the kids thinking about impacts and how you can design something to better suit a situation," says Kaden Allen, an aerospace engineering student.

Breaking the children up into groups and getting them to collaborate proved challenging at first, but once a stash of Popsicle sticks, foam, rubber bands and other various supplies were unleashed on the groups, the creativity started flowing. 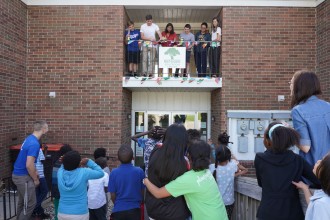 Students gather to watch their eggs get dropped from a balcony.

Moments like that can plant the seed for future learning or even a potential career.

"There was a little bit of bickering amongst some of the groups, but once everyone came back for the actual egg drop, everybody came together," Allen says. "They were all super excited. Everybody was chanting, and it was just a really fun moment."

"Our goal wasn't to necessarily teach the kids high-level engineering concepts," says Paul Marsh, an electrical engineering student and local project lead for Engineers without Borders. "The most important thing we wanted them to get out of this was to just have a lot of fun and get excited about this type of stuff." 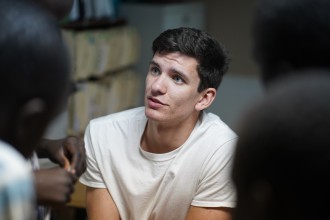 Kaden Allen explains engineering concepts to a group of students.

Projects like the one at the Refugee Education Center give WMU engineering students an opportunity to practice their craft while also giving back to the community.

"Everyone on this team loves engineering, and we wanted to make an impact on those who don't have many of the same opportunities we had growing up," says Marsh.

The impact was evident seeing the children's eyes light up during a question-and-answer session, as Allen explained that an aerospace engineer works on airplanes and rockets.

"When kids at REC are allowed to do experiments, build, work as a team and create something, they are learning the valuable skills of creativity, collaboration, communication, failure, achievement and reflection," Kummer says. "These are skills that they will carry with them as they enter the workforce and become contributing adults in our society."

Marsh recalls his own experiences with science and math as a child.

"We had robotics clubs and other programs that allowed us to explore engineering from a young age," says Marsh. "I can only imagine where I would be if no one did that for me." 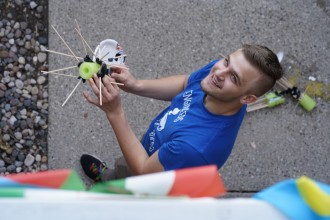 Marsh checks to see which eggs survived the drop.

The WMU group is already working on other potential projects for the Refugee Education Center to get the children engaged and excited about science and math.

"We don't want something too hard for the kids, because we don't want to disassociate them from these concepts," says Marsh.

"We are impressed by their preparation, genuine interest and passion in their own field of study, their eagerness to engage with the students and ability to break down complex concepts into bite-sized pieces for language learners here at the center. We look forward to continuing our collaboration."

In addition to the local project, Engineers without Borders is also involved in a long-term international project to provide clean water to a community in Nicaragua.

In December 2017, members traveled to San Antonio de Upa to learn more about the need for clean water and begin the process of conceptualizing a system to deliver it to the community.

Since then, the chapter has conducted fundraising and begun designing a system to pipe water to the community, filter it and store it for future use. Students are currently working on design calculations and drawings, collaborating with engineers in the United States and abroad, and developing resources about clean water management to give the community.

Questions about current or future projects can be emailed to ewb.wmich@gmail.com.