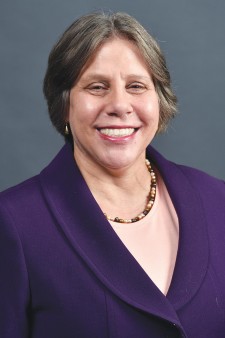 KALAMAZOO, Mich.—In 1920, American women made a splash on the Olympic stage and at the ballot box. Nearly 100 years later, the United States women's national soccer team finds itself at the intersection of sports and politics as well.

"Change takes time," says Dr. Linda Borish, associate professor of history as well as women and gender studies at Western Michigan University. "But sometimes it's the right and equitable thing to do."

That change could be on the horizon, says Borish, as the team continues to dominate the headlines after winning its second consecutive World Cup, with a 2-0 route of the Netherlands in the championship game July 3.

Among chants of "U-S-A," a chorus of fans in the stadium shouted, "Equal pay!" as FIFA's president prepared to present medals to the team. Days later, after a ticker tape parade through the streets of New York, state and federal lawmakers announced legislation aiming to bridge the gender pay gap—a gap the team filed a lawsuit in March to close.

"There's a long history of women in sport, but it does not lead to equity or equality in sport," says Borish, who has spent her career studying gender history and American sport history.

For centuries, women have displayed a desire to participate and an ability to excel in sports in America.

"There were women's baseball leagues (in America) in the late 19th century, but once professional baseball took off and rules were codified, it was promoted as a manly, outdoor game and the women's leagues were slowly phased out," Borish says.

"That was a milestone in that women were playing competitive baseball, but yet it was very much contoured by the gender expectations," says Borish. "The women had to wear skirts. They had to wear makeup. They were playing baseball but had to be very much the lady." 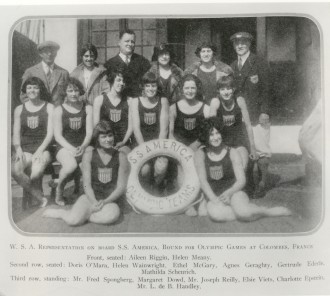 Members of the Women's Swimming Association competed in the 1924 Olympics, including Gertrude Ederle, middle row, second from right. (ISHOF.org)

Throughout history, Borish says, women have demonstrated athletic ability and interest while fighting against expectations of domestic roles or limited physical athletic performance.

Women were allowed to compete on the United States swimming and diving teams for the first time in 1920, three years after Charlotte Epstein created the Women's Swimming Association and battled an all-male Olympic committee to make it happen. They won several gold medals.

"By winning, they came back home and showed that women could succeed in athletics, so that began to popularize several sports in the 1920s and 1930s," says Borish.

Athletes like Gertrude Ederle, who in 1926 became the first woman to swim the English Channel, besting the previous record held by a male by two hours, continued to emphasize the physicality of female athletes.

Their success also came during the women's suffrage movement, which earned women the right to vote.

"Women would often swim in suffrage races where they would, as lifesavers and swimmers, throw into the ocean a mannequin that would say 'anti-suffragette,'" Borish says, adding that the Women's Swimming Association, which included Ederle, hosted the women's suffrage races. "Physical abilities and political abilities were tied together when women would be involved in athletic events and support for suffrage."

A milestone for girls and women in sport came in 1972 when Title IX of the Education Amendment Act prohibited discrimination in schools receiving federal funding for educational activities.

"Since sport is part of intercollegiate life, sport became part of that quest for equality," says Borish, who notes that many universities then started to add scholarships, coaches and dedicated athletic facilities for female athletes.

Many young women who grew up with those expanded athletic opportunities and advantages went on to successful careers on the national and international stage. 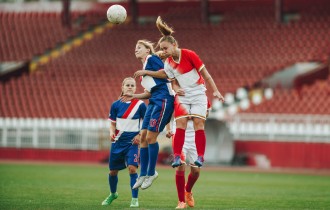 Title IX paved the way for girls and women to compete at higher levels.

"Many of the previous World Cup winners—like in 1999—came from top college programs, and that was because they had places to train, they had competition and could then be on a national team," Borish says. "These 'Title IX babies' are beneficiaries of the athletic scholarship and the environment that says sports should be equitable among male and female students in college."

The environment has allowed female athletes to thrive and led to the creation of professional women's sports leagues, national ad campaigns and youth development programs. Yet many elite female athletes, like those on the women's World Cup team, fail to get the exposure and compensation they feel they deserve. Borish says she sees a historic pattern to that.

"They have achieved the pinnacle of success and yet are not paid or given equal opportunity to gain the money from winning world cup titles," she says, "so the battle for equality goes on for equal pay for women whether it's a job playing American soccer or in other areas of the workplace."

There are encouraging signs, Borish says, that change is coming. In 2007, Wimbledon became the last of four major tennis tournaments to offer equal prize money to male and female competitors. It was a fight for parity started by tennis legend Billie Jean King and enhanced by sisters Venus and Serena Williams.

"Having those who have paved the way, the female athletic pioneers, definitely helps the current scenario," says Borish. "And they're all winners, and people like winners in the United States."

Lawmakers are also putting an emphasis on expanding and promoting opportunities for girls and women in sports, like Michigan Gov. Gretchen Whitmer, who recently created a task force focused on the issue. Kathy Beauregard, longtime WMU director of athletics, is among the leaders selected to participate.

Borish says a generational shift could be the ultimate factor in moving female athletes forward.

"The fact that so many youngsters, male and female, seem to see this as part of what should be done can help in the future, because both the young men and young women growing up and participating in sport will have a sense that it should be equal."