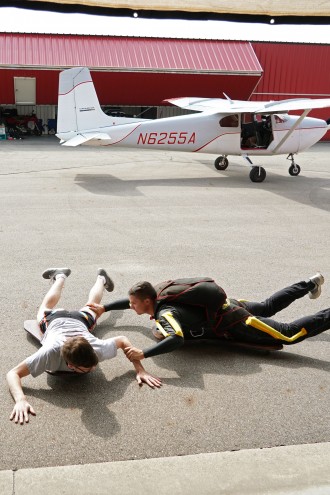 These are not the emotions one would expect when describing jumping out of a Cessna-182 Skylane single-engine light airplane at an altitude of 11,000 feet, free-falling for 40 to 55 seconds at a velocity of 120 miles per before deploying a parachute at nearly 3,000 feet above the ground.

But this is how members of Western Michigan University's Skydive Broncos describe their experience when practicing their sport and training for precision landing and formation skydiving competitions. This explanation remains the same whether it is a members’ first jump or more than 60th jump, as is the case with WMU senior Nathan Kueterman of Monroe, Michigan.

"For your first jump, you build up a lot of nervousness when heading to altitude. The moment the door opens, and you feel the wind beating on your face, time just kind of slows down. At this point, everything you have been worrying about in day-to-day life goes out the window. As you progress in the program, you get more comfortable as you fall and learn to relax," says Kueterman, an aerospace engineering major who joined the club in fall 2017 and now serves as acting president.

"My career path forces me to do daring things. I don’t want to be the person who sits at a desk from 9 to 5 their whole life. I hope to build this organization into something that other collegiate teams can follow and model themselves after, and potentially reinvigorate what many consider a dying sport. We are attempting to create something novel in the sport of skydiving, and it’s beginning to show."

Through Registered Student Organizations like Skydive Broncos, WMU students have hundreds options to get engaged in out-of-classroom learning experiences, skill-building  opportunities and fun. Skydive Broncos is of 460 different student clubs and activities offered.

Kueterman and team members Wil Spielmaker of Flint and Molly Flatoff of Highland competed at the First Annual Sport Accuracy Competition hosted by Skydive Allegan in July. This is in preparation for the collegiate national competition in Florida this December. The team hopes to improve on their skills and potentially take home some medals this year. Spielmaker says the camaraderie of the team, which boosts 35 members, fueled his enthusiasm for the sport along with the adrenaline rush that comes with skydiving.

"It's a great group of people, and we've connected over an experience that's indescribable," says Spielmaker, a senior aviation fight science and aviation management double major who joined the team two years ago and has accrued 50 jumps. "I can fly planes, I can land planes, and I can jump out of them."

"I love the rush when the only thing that matters is pulling your chute and getting to the ground safely. The responsibility is entirely on you," adds Flatoff, a junior studying nursing. She tallied 44 jumps before the late July competition, and she also has formed strong bonds with her team in the past two years. 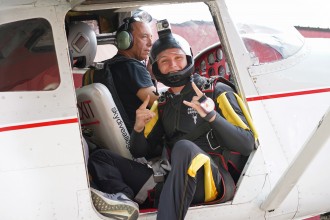 It's the team’s hastily formed connection right from the start that impressed Coach Dennis Bennett, owner of Skydive Allegan. He is connected to the WMU team through his mentor Dennis Johnson, a Bronco alumnus and a member of one of the previous iterations of the Skydive Broncos from the 1960s.

The sport has come a long way since it started gaining visibility over the decades, Bennett adds. “There were no seat belts, instructors, or guidelines for training,” explains Bennett who has been involved with the sport for 20 years and has accumulated more than 3,300 jumps throughout his career.

Kueterman says the Skydive Broncos are the first collegiate skydiving team to ever achieve 501(c)(3) nonprofit status, opening many doors of funding through corporate and personal donations. Members have been approaching sponsors to help with cost, as jump time and gear can be expensive. So far, they gained sponsorships with several local business such as Maggie’s, Belding Tanks and Young Entrepreneurs of America.

“Our goal is to make the sport accessible and affordable for anyone willing to take a chance to grow themselves personally and professionally. If we do this right, we can set the standard for what a collegiate team is and allow the sport to spread and positively impact as many lives as possible. I am blessed to have been able to be put through the program, and I wouldn't want anyone else to miss such an amazing opportunity," explains Kueterman when describing his vision for the team.

This past winter, Bennett and a few of Skydive Allegan’s coaches accompanied a group of students to a national collegiate competition in Arizona the end of 2018. The trip involved a 36-hour, cross-country drive in a van and produced treasured memories.

"Right from the start, they built a very tight bond, and they act like they've known each other forever," he says. "As much as it is an individual sport, it's also a team-driven sport. You have to overcome a lot of inner fears and, on top of that, learn to work well with others in a high-stress environment. The speed and activity of the sport is not the danger—it's the stress." 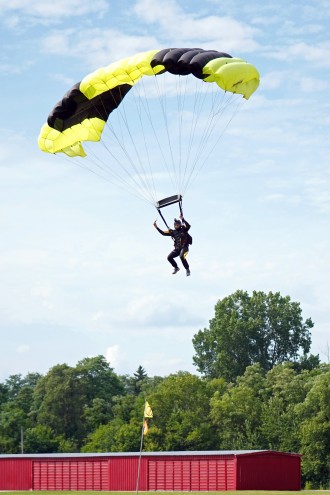 Skydivers jump out of a single-engine light airplane at an altitude of 11,000 feet, free-falling for 40 to 55 seconds at a velocity of 120 miles per before deploying a parachute at nearly 3,000 feet above the ground.

Clementia Kelly, a junior from Marshall studying nursing, took that trip Arizona with seven other students, including five who competed. Team members, many of who had just 25 jumps under their belts at the time, competed against others who had 150 jumps. WMU place seventh out of nine teams nationally overall in the two-way category. As for the accuracy landing competition, the team placed surprisingly well for what little experience they had with Kueterman leading the Broncos to 8th of 35 in the event.

"Skydiving is something I always wanted to do—to put myself out of my comfort zone, try something new, meet people and expand my horizons," says Kelly, who has logged 10 jumps as of this summer. She heard about the skydiving team through her involvement in a rock climbing group.

"I've gained a lot of confidence in myself, made some really great friends and met some great, interesting people. When you have your life in your own hands, you learn to trust yourself more," she says.

Senior Quianah Cooper of Traverse City admits she is afraid of heights, though she enjoys rock climbing and skydiving. Cooper, who is studying nursing, sees her activities as a way to face her fears.

"It really is beautiful and a once-in-a-lifetime experience," she says. "You are up so high, it's just a surrealist experience. Your brain does not comprehend how high you really are."

The sport is ideal for self-described "adrenaline junkie" Teagan Arndt of Ortonville, a sophomore studying aviation maintenance, who added team members are welcoming as she learns the ropes and has taken two jumps as of July with an instructor.

"It was going up in the plane that made me nervous, but that goes away the minute you step out," she says.

Nayah Wiley, a senior from Portage studying biology, was still waiting this summer to take her first jump after being on the team since April.

"I wanted to learn about it before I jumped and feel 100 percent ready," she said, adding she learned about the club through a fellow student. "When I am ready, I will be in environment where I feel comfortable doing it."

Providing a safe, educational and yes, exhilarating, experience is what Kueterman hopes to promote with the invigorated team, spreading its story and expanding the imagination and possibilities for the group.

"I'd love to video someone skydiving in the Buster Bronco uniform or have one of our instructors wear a WMU flag and land in Waldo stadium before a game to show the school that we add value to the college experience," he says "Like anything that’s worth chasing in life, you have to work for it. It’s a work in progress, but the results are going to shock and impress many people. The Skydive Broncos are here, and we’re ready to jump."