Students learn of triumph and persistence in life of Walt Disney 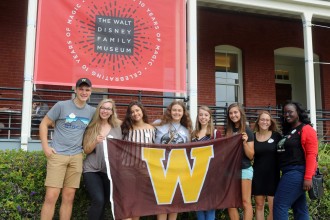 Eight Western Michigan University students this summer had the opportunity to look behind the curtain at the process and journey of creator Walt Disney, studying his background, successes and failures.

With instructor Dr. Christopher Tremblay, the group embarked in July on a cross-country journey following in the footsteps of the American entrepreneur and pioneer in the animation industry. Titled "Walt's Pilgrimage," the trip is offered as part of a course in WMU's Lee Honors College's Study in the States program. Students traveled to eight cities in three states to visit key locations marking some of the most significant moments in Disney's life, from birth to death.

"By walking in his footsteps, you get an idea of the simplicity of his life and what was going on in history and culture during that time," explains Tremblay, an adjunct WMU instructor who is also director of external engagement at Michigan College Access Network in Lansing.

Students individually serve as guides for each day, studying the historic significance of each location as well as writing an eight-page reflection essay on their experiences.

"Students come from all different majors. The course is very versatile, and every type of student takes something away," he says of the course in its fifth year. "We also meet up with alumni in four of the cities we visited, so there's an opportunity for networking with Broncos in the community."

A two-time WMU alumnus, Tremblay participated in the Walt Disney World College Program in college and wrote an honors thesis titled 'Promoting Square Feet with Character: The Influence of Fantasy on Meetings and Conventions at Walt Disney World.” He not only developed the "Walt's Pilgrimage" course but is also the author of a book by the same name.

The groups began its trip at Disney's birthplace, at 2156 N. Tripp Ave. in Chicago's Hermosa neighborhood.

During their visit to Chicago, the students also visited other significant Chicago sites including Walt Disney’s high school, McKinley High School, now Chicago Bulls College Prep High School, and the former site of the O-Zell Factory, a jelly and juice company where Walt Disney worked and where Walt's father, Elias, invested a significant sum of money before the company went bankrupt in 1920.

From Chicago, the students traveled by van to additional Walt Disney family home locations in Marceline and Kansas City, Missouri, before flying to San Francisco, where they visited the Walt Disney Family Museum.

They then headed south, visiting Mineral King, the spot within Sequoia National Park where Walt Disney almost built a ski resort, and Golden Oak Ranch, a 708-acre ranch Walt Disney purchased where classic films like "Old Yeller" and "The Parent Trap" were filmed.

Max Wicklund, a junior from Plainwell majoring in advertising and promotion, heard about the Study in the States program from a friend.

He adds he took away much more than just a historical appreciation for Disney's life and work from the experience.

"I learned from this course to continue to fight for what I believe in," Wicklund says. "The story of Walt Disney is one of triumph and persistence. Though he faced many adversities in his life and was pushed to the edge of poverty by the failure of his cartoons, he continued to fight for his passion. Disney's perseverance was one of his greatest traits and can be used as motivation for anyone in their field of study.

"Walt's Pilgrimage is truly like no other course you will ever take and was an opportunity that I will not soon forget."