KALAMAZOO, Mich.—Take a guided tour through Mexico with the Sones de México Ensemble during Western Michigan University's observance of national Hispanic Heritage Month, which runs from Sept. 15 to Oct. 15.

The Latinx ensemble will perform on campus Monday, Sept. 16, to promote a greater appreciation of Mexican folk music, traditional music and culture. Its innovative and educational multimedia performance, "Beyond the Music: A Musical Geography of Mexico," is set for 6:30 to 8:30 p.m. in the Dalton Center Recital Hall.

Using projected images and live music demonstrations, Mexican ethnomusicologist Juan Díes and the multi-instrumentalist ensemble will guide those attending through several regional styles of Mexican folk music played on a collection of over 40 instruments. Some of these instruments are rarely heard outside of the regions where they originate. The ensemble will talk about what to listen for in the major regional styles as well as take questions from the audience.

The event is free and open to the public. It is being made possible in part by a grant from the National Endowment for the Arts with support from the Kalamazoo Foundation; Nueva Opinión; and WMU's Office of Diversity and Inclusion, School of Music and Department of Spanish, among others. 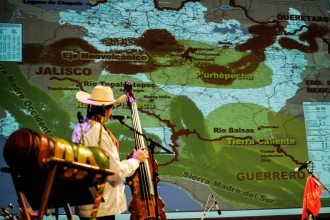 One of America's premier folk music organizations, the Sones de México Ensemble is a two-time Grammy Award nominee and four-time Chicago Music Awards winner. It incorporates music, dance, narration and multimedia in its performances while specializing in Mexican "son" (pronounced SOHN), a generic term that encompasses many regional styles of Mexican folk music and dance.

The ensemble is dedicated to keeping the tradition of Mexican son alive in its many regional forms, including son jarocho, son huasteco, gusto, son istmeño, chilenas and more than 30 other styles. As performers and recording artists, its members also have developed and popularized many original arrangements of Mexican traditional tunes.

All six members are multi-instrumentalists, researchers and educators. Between them, they can skillfully play more than 80 traditional Mexican folk instruments.

The Sones de México Ensemble was formed in Chicago's historic Pilsen neighborhood in 1994 and has performed internationally as well as at such well-known U.S. venues as Carnegie Hall, the Getty Museum, Millennium Park and the Kennedy Center. A nonprofit organization, it receives partial funding from the National Endowment for the Arts.

In addition to performing, the ensemble has released six albums. "Esta Tierra Es Tuya" ("This Land is Your Land") came out in 2007. It served as an immigrant manifesto and earned both a Grammy and a Latin Grammy nomination. Other releases include a traditional Mexican dance party album that was featured live on Garrison Keillor's "A Prairie Home Companion" radio show, a dual-language children's album that won a Parents' Choice Award and a CD marking the turning of the Mayan calendar in 2012.