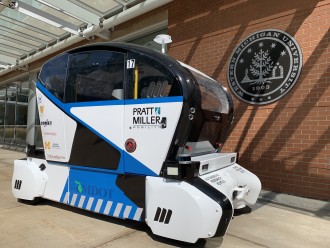 Two autonomous shuttles will be tested on the WMU campus.

KALAMAZOO, Mich.—Transportation of the future has arrived on the Western Michigan University campus.

"I'm pleased to see that Pratt & Miller has brought this important project to campus and appreciate the work of people across the University to pilot this important advance in mobility," says WMU President Edward Montgomery. "WMU is committed to serving our students and society. This project is an excellent example of that; applying the knowledge of our world-class faculty and students to develop and test cutting-edge transportation technology."

MDOT, Pratt & Miller Engineering, WMU, the University of Michigan, Kevadiya Inc., Robotic Research, Comet Mobility and Easterseals are all collaborating on the project.

Engineers at Pratt & Miller, the project lead, began work early this year, modifying two shuttles for accessibility. They lengthened the wheel base, added wheelchair restraints and redesigned the interior of the vehicles. From there, in collaboration with project partner Robotic Research, they integrated an autonomous system, allowing the vehicles to run without a driver.

"The testing to ensure the vehicle is safe and functioning as intended was already done at Robotic Research's facility," says Jeff Reece of Pratt & Miller. "Now we want to get some real-world experience with it; have some real-world passengers in the vehicle and get some feedback." 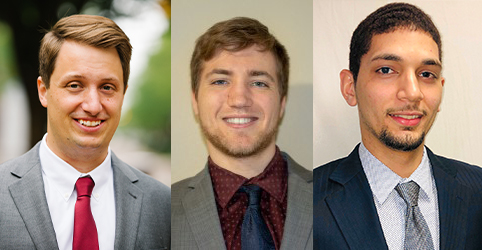 Dr. Zach Asher, WMU assistant professor of mechanical and aerospace engineering, and graduate students Nick Goberville and Johan Rojas conducted research for WMU's role in the project. The students helped with environmental mapping and modeling for the shuttles.

"Working with the WMU student researchers on this project has been fantastic," Reece says. "Their drive to make the project successful is evident in the current on-site preparations they are coordinating."

"This project is a textbook example of how our WMU researchers collaborate with others to solve real-world problems," says Dr. Terri Goss Kinzy, vice president for research at WMU. "Dr. Asher has recruited terrific graduate students as part of this work, bringing together our research and academic missions."

The first shuttle arrived on campus Thursday, Sept. 19. In its initial journeys around campus, engineers will be driving the shuttle manually with a remote control while researchers remotely collect data from sensors and begin mapping the vehicles route. The following week, the second vehicle is expected to arrive.

For the first few weeks, Reece says, researchers will be working on mapping and setup. The technology does not involve a driver, pedals or a steering wheel. A safety operator will, however, be on board at all times, ready to implement one of eight emergency stops if necessary or switch to manual control. Rides will likely begin to be offered in mid-October.

The tentative route would run in a loop from a loading area west of Sangren Hall directly south to the fountain near Sprau Tower. A plan for how riders would request transportation is still being developed.

Engineers ask that if you see the shuttles running on campus during this pilot phase, keep a safe distance away. The vehicles will not exceed 4 mph, and the technology is built to stop them whenever someone or something comes within a few feet.

The project is expected to wrap up at the end of October.