Read more stories about Bronco innovation in the summer 2019 issue of W Magazine.

KALAMAZOO, Mich.—An experience with a friend is fueling technological advancement in an engineering lab at Western Michigan University.

Dr. Pnina Ari-Gur, professor of mechanical and aerospace engineering, says a friend who is legally blind opened her eyes to some of the physical challenges people with visual impairments face every day. Generally armed with a cane to identify impending obstacles, Ari-Gur thought there must be a way to use technology to improve the experience. 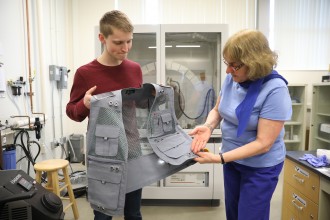 "A cane really only detects obstacles on the ground," says Ari-Gur. "But what if there is a low-hanging branch in front of them? There are many areas a cane does not cover."

The physical stress of constantly carrying and sweeping a cane can also take a toll on the person using it. In conversations with clinicians at the Battle Creek Veterans Affairs Medical Center, Ari-Gur learned that people with blindness and visual impairments sometimes develop carpal tunnel syndrome.

To make the experience easier, Ari-Gur came up with the concept for a smart white cane: wearable technology that removes the physical demand by detecting obstacles within a certain radius. It would come in the form of a light-weight vest.

She secured funding to start the project through WMU's Faculty Research and Creative Activities Award as well as a donation from Lawrence and Carrolyn Kopka, whose son, David (BS '89), is one of Ari-Gur's former students. 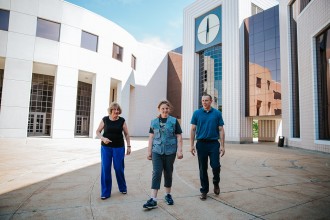 Many drivers are familiar with the high-pitched beeps that sound if you're too close to another vehicle. Ari-Gur's virtual white cane works in a similar fashion but takes the concept a step further with audio messages.

Justin Rittenhouse, a mechanical engineering Ph.D. candidate, began developing the basic code to get the sensors in the vest to interact with a mobile application.

"I wanted to take on the project because I've never made a phone app and was curious how to do that," says Rittenhouse, who earned both his bachelor's and master's degrees in aerospace engineering at WMU. "Also, I enjoy helping people. In fact almost all of the research I've done has been geared toward helping people in some way."

Two students from the Kalamazoo Area Math and Science Center (KAMSC) built on Rittenhouse's work, spending a semester writing code to upgrade the vest from two sensors to six and implementing verbal commands.

"Sensors are put inside so when it detects an object around you it can tell you where it is and how far away it is in the app's audio board," says Anna Puca, a student at Loy Norrix High School in Kalamazoo.

Puca and Portage Central High School student Julia Strauss worked in collaboration with a group of WMU students, under the guidance of Ari-Gur. Their work earned them the top prize at the Southwest Michigan Science and Engineering Fair and qualified them for participation in the Intel International Science and Engineering Fair—the world's largest international pre-college science competition—where they won the Joining Forces for the Community Award, presented by GoDaddy.

Riley Zenas and Jacob Peterson, both mechanical engineering majors, were part of a team of WMU students tasked with designing the vest and developing power sources for the technology. 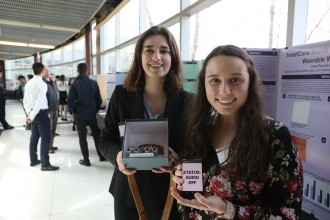 "Creating something that could potentially change somebody's life feels very fulfilling," Zenas says. "Lowering the risk of carpal tunnel and just the physical stress of using a cane is something that is very important to the people who use it. That makes it very important to me that we do a good job in its construction so that it may be used daily by those who need it."

The project focuses on harnessing the power from sustainable sources. Solar panels on the shoulders of the vest serve as the primary energy source. Getting those panels onto the vest required some research outside of Peterson's expertise.

"My fiancée taught me how to sew," says Peterson. "She's a dance instructor and often has to fix costumes for students."

Knowing that sunshine is sometimes hard to come by in Michigan, the students also worked on a secondary source of energy. They developed a shoe insert that can generate an electrical charge when a person walks. This piezoelectric material may be used to charge back-up batteries for the vest.

"Working on a project with real-world application is a great experience because it provides a sense of need and purpose for potential users," Peterson says. "This helps with transitioning to designing products in our careers after college."

The project also offered the budding mechanical engineers a chance to diversify.

"It's very important for students today not to be locked into one discipline, but to have interdisciplinary skills. A mechanical engineering student should learn electrical engineering and programming for instance," says Ari-Gur. "We try and get as much of a complete experience as possible." 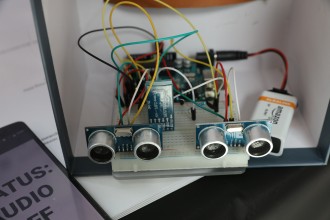 Strauss and Puca's work earned them top prize in the Southwest Michigan Science and Engineering Fair.

Strauss says her experience with this project opened her eyes to the technology available to students in WMU's College of Engineering and Applied Sciences.

"I want to continue doing research in college," says Strauss. "I think this has been a really good experience."

She and Puca also see the value in working on something that could make a difference in someone's life.

"I've seen people that have dealt with medical issues growing up and I've seen that technology can fix that," says Puca. "So knowing technology can help, I want to work on assisting people in need."

The project's success also validates the work they've been doing in the classroom.

"I truly believe that someday this wearable white cane will be able to help so many people all over the world," Strauss says. "I also liked seeing how coding—something I'm learning in school—can be utilized in the real world to make a difference in people's lives."

Advancements on the horizon

The smart white cane is still a work in progress. Ari-Gur says this basic model could serve a need in places like India where there is a large population of visually impaired individuals and the vest could be produced at a low cost.

She sees potential for the concept to be advanced for more high-tech markets.

"I'd like to eventually incorporate smart fabrics for the vest," says Ari-Gur. Smart textiles have digital components within the fabric. This would make the vest more lightweight and wearable but could also considerably raise the cost.

Ari-Gur is currently exploring other funding options to continue her research.