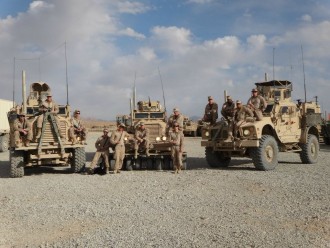 KALAMAZOO, Mich.— On Veterans Day, Western Michigan University honors the service of its robust military community. Currently, there are 825 military-connected students on campus—that includes those who have served or are actively enlisted in the US Armed Services or their dependents.

"Right now, in a nation divided, it is important to know that military-connected students are all around us," says Billy Clayton, WMU's ROTC enrollment and scholarships officer, who retired from the Army after serving for 20 years. He points out that a number of other faculty and staff members have also served in the military.

Ranked a 2020 "Best for Vets" college by Military Times, WMU offers a number of programs designed to support the military community. A major resource is the Office of Military and Veterans Affairs, which was established on campus in 2009 to help service members make a smooth transition into civilian and college life.

"OMVA is the greatest resource you could have (as a veteran)," says Patrick McConnell, an electrical engineering major from Edwardsburg who served in the United States Marine Corps. 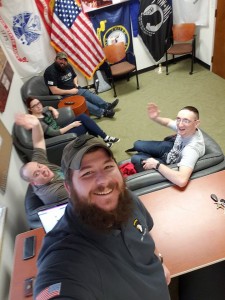 The military and veteran student lounge offers a space for military-connected students to relax and meet other vets.

Services for military members and their family on campus are wide-ranging, from priority registration and a military transition course to a military and veteran student lounge and active Student Veterans of America—SVA—chapter.

"The hardest part of transitioning is not having the same brotherhood when you get here; you feel kind of isolated," says Troy Duck, a Marine Corps veteran and SVA public relations officer. "Being able to have the vet lounge and the events that we do helps a lot."

WMU also participates in the Department of Veteran's Affairs VetSuccess on Campus program, which places a VA counselor on campus to connect servicemembers and their families to VA benefits.

"Military students add to the already diverse student population of WMU," says Ashley Goodwin, a military advocate in the Office of Military and Veterans Affairs who is an active member of the Army National Guard. "Military-connected students are usually older, have been introduced or immersed in another culture, and are driven and focused on quickly reaching their educational goals."

Some members of WMU's SVA share their service stories below. 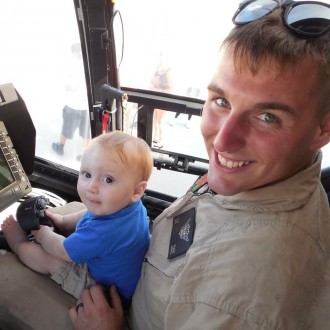 Duck and his son sit in the cockpit of a military aircraft in 2015.

"Aviation's in my blood," says Duck, who is majoring in aviation flight science. "My grandpa has his own grass strip in Edwardsburg. I've been flying since I was little with him."

Service, it seems, is also in Duck's blood. His father served in the Marines for 20 years, his uncle was in the Navy and his grandfather served in the Air Force. He chose to follow his father's lead with the Marines, joining the aviation unit. As a crew chief, he flew missions around the Middle East, doing everything from evacuating embassies to delivering supplies.

After missing the birth of his son while he as deployed, Duck decided to end his active service so that he could be home in Edwardsburg with his growing family. With so much experience flying, pursuing a degree in aviation seemed like a logical next step.

"I feel like if I would have come to college straight out of high school it wouldn't be the same," he says. "The military gave me the discipline to go to class every day and do my homework."

"I've had the same flight instructor since I started my private pilot's license," says Duck. "Building that bond is nice. Some of the head instructors are also good mentors who helped me (through my courses)."

Unsure what the future might hold, Duck is focused on finishing his flight time and exploring potential career options. There are some opportunities in the Department of Homeland Security and the CIA drawing his interest, as well as the possibility of becoming a commercial pilot.

On the front lines 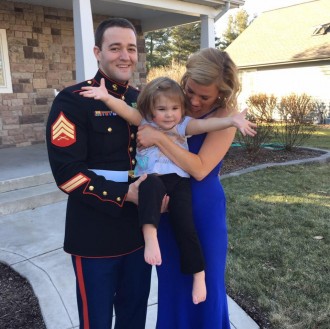 McConnell and his daughter and fiancee pose for a photo before the 2017 ROTC Ball.

Patrick McConnell loves adventure. He was still in high school in Edwardsburg when he decided to enlist in the Marine Corps.

"I knew there was a chance I would see combat, and that's what I wanted," says McConnell, who had been on the pre-med track at a community college before deciding the field wasn't for him. "I wanted adventure, but I also wanted to serve my country."

Infantry was closed when McConnell enlisted, so he chose ground option and headed to boot camp in late 2007. In September 2008 he deployed for the first time to Iraq.

"Every year I was in the Marine Corps I was overseas," says McConnell, who served eight years on active duty.

In his early deployments, McConnell ran logistical missions in Afghanistan and Iraq. He drove trucks to deliver troops and supplies in various areas, eventually promoted to vehicle commander where he used his tactical and navigation experience to plan safe routes.

"I was exposed to all kinds of things. I've been exposed to 11 improvised explosive devices, fire fights, medical evacuations; I've seen the whole ordeal."

After completing his contract with the Marines, McConnell decided to pursue an engineering degree at WMU. The skills he developed in the military, like perseverance, leadership and problem-solving ,have helped him make a successful transition to college life.

"Teamwork is another big one. That's a huge skill to have here, because if you combine teamwork with leadership you can get groups organized," he says, "I know there's no way I could get through school without help from my peers."

McConnell has also enjoyed being part of Student Veterans of America  for both fellowship and networking opportunities.

"Part of it is helping incoming veteran students transition and guide them through how school works along with giving recommendations or tips and tricks. It's the kind of help you would get from a team being in the military."

Gough, second from left, stands with President Edward Montgomery in the President's Box at a Bronco football game.

"I never thought I would come to college and make a bunch of friends. I thought I'd just go to school and get it done, but then I got involved with SVA," says Ivan Gough, the organization's treasurer.

As a Marine Corps veteran, Gough has seen friends from his old unit struggle to find their place once they finish their service.

"It's definitely important to be involved in something. Making connections, meeting other people, networking. People come through here, they come to SVA events, and then when they graduate and get good jobs, you can talk to them and ask for help."

Military connections are what motivated Gough, of Adrian, to pursue a college degree once his commitment to the Marines ended.

"A buddy was doing mechanical engineering at a school in Connecticut. I thought about it and knew I had aviation as a fallback, so I thought I'd go ahead and try college and see how that goes."

He chose WMU for its engineering campus and after taking some classes decided to major in mechanical engineering. Having worked on aircraft in the military, the program fit well with his skill set. Now in his second year at WMU, he still has some time to decide what his career will be. But he knows the basic skills he honed in the Marines will help him reach his ultimate goal: a college degree.

"It's given me perspective on how to get things done," says Gough. "Failure is one thing I wasn't prepared for coming out of high school. The Marine Corps was the first time I really got chewed out. I feel like that helps coming here where stuff just kind of happens, and you get over it instead of dwelling on it."