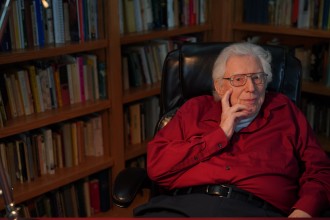 KALAMAZOO, Mich.—A weekend conference honored the legacy of a world-renowned Western Michigan University professor. Dr. Rudolf Siebert, a leading voice in the critical theory of religion, retired in August. He was a professor of religion and society in the Department of Comparative Religion for 54 years.

"His life's work has been trying to bring people together and talk through their problems; to come to some sort of common understanding and agreement so they can proceed forward in a peaceful manner that makes for a better world for everybody," says Dr. Stephen Covell, chair of WMU's Department of Comparative Religion.

Siebert's unique perspective was forged as a child. Growing up in Frankfurt, Germany, he was just 6 years old when Hitler came to power. As a member of the Catholic youth movement he spoke against fascism but was ultimately drafted and forced to join the German Air Force at the age of 15.

"His biography is inseparable from his teaching or from his philosophy," says Dustin Byrd, a WMU alumnus who considers Siebert a mentor. "He learned at a very early age what power was, what corruption was, what racism was."

Ultimately taken as a prisoner of war and brought to America, Siebert was freed after it was determined he was not a Nazi sympathizer. The entire experience had a profound impact on his life, and he has dedicated his career to studying the relationship of religion to secular movements.

"What we want to do is come to a level where people can quietly and rationally talk about these things," says Siebert. "Political discourse has really declined in the world." 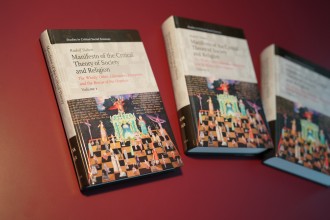 Siebert has written several books over the decades.

Siebert came to WMU in 1965. During his tenure, he helped found WMU's chapter of the American Association of University Professors, directed the Center for Humanistic Future Studies at WMU, founded two international conferences and wrote dozens of books and articles. He also taught thousands of students.

"He really teaches his students how to think critically about the world," says Byrd. "It begins with thinking critically about religion, but then it expands into politics, economics, philosophy, law and all these other things."

Siebert's investment in his students extended far beyond the classroom—inviting students to international conferences to help them network, co-publishing books and editing volumes with them.

"He did a lot," says Covell. "For him, it's not about him. It's about something much bigger."

Siebert has also hosted a weekly lunch for decades, inviting students, friends and family to come for fellowship and discussion. He even built an addition onto his house for students to live in while they studied with him.

"Knowing you've got a faculty member that's going the extra mile and is really supportive and wants to see you succeed and taking those extra efforts is something students really thrive on," Covell says.

The impact Siebert has had will be evident in a conference on critical theory and the study of religion, where some of his former students will make presentations.

The Department of Comparative Religion is also looking into the possibility of creating an endowed position in Siebert's name to carry on his studies in the critical theory of religion and society.

"He's such an important person in the field and he's influenced so many disciplines," says Byrd. "It's imperative that Western finds a way to continue his legacy."