KALAMAZOO, Mich.—Alexis Lind has dreamed of building and launching rockets since watching “October Sky” in seventh grade. Now, as part of the College of Engineering and Applied Sciences’ Advanced Rocketry Club, her dream is coming true. The second-year aerospace engineering student and about 25 other club members will compete in the NASA Student Launch competition in April 2020. Western Michigan University’s team was one of 42 college teams, and the only Michigan school, accepted into the prestigious contest. 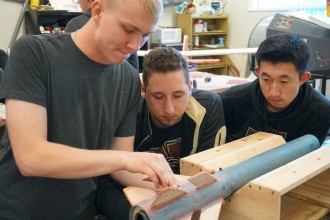 The NASA competition is a culmination of a strategic plan executed by students over the past six years to move the club from a group of individual hobbyists to a competitive team.

Jay Krebs, a fifth-year aerospace engineering student who serves as Lead Rocketry for WMU’s American Institute of Aeronautics and Astronautics chapter of which the group is a part, says early in the club’s history members worked separately to build rockets from kits. Now, they work together to build one rocket from individual parts using knowledge learned in the classroom.

“We’re now building from scratch instead of from a kit and applying engineering principles,” Krebs says. The transition is exciting for Krebs. “I like the opportunities it provides. It’s exciting to talk about what we do.”

Krebs and his teammates are talking a lot these days. At least twice a week, they gather to design their mission system, which will include a rocket, a parachute recovery system, and a payload system. The goal of this year’s NASA mission, "Lunar Ice Recovery," is to launch a rocket to a target altitude – between 3,500 and 5,500 feet. The team will deploy a mission vehicle that will be capable of navigating to target drill sites, drill 10 milliliters of simulated lunar ice from two inches below the surface and drive 10-linear feet carrying the simulated ice sample.

With their initial plans in place, competition rules require teams to test a small-scale model of their rocket and report findings to NASA. After the team’s test launch—tentatively scheduled for December or early January—they will incorporate the lessons learned into their final design. They will begin building the competition rocket in early 2020 and launch it in the April contest.

With their advanced certifications in hand, the club entered the Argonia Cup Collegiate Rocketry Competition in the spring of 2019, where their rocket performed well. A good result in the Argonia competition provided club members with the confidence to aim for the highest rocket competition available to students: the NASA Student Launch. 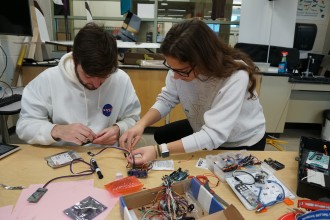 Club members are thrilled to be one of only 42 college teams accepted into the NASA Student Launch competition and are now applying engineering knowledge learned in the classroom to navigate the contest’s rigorous requirements. Alexis Lind, who grew up dreaming of launching rockets, says the group is incorporating lessons learned at last year’s Argonia Cup competition into this year’s mission system. “This year is more intense because, last year, we only had to launch the rocket to a certain height and then land it within a certain radius,” Lind says. “This year after landing it, the rover has to drive around and collect ‘ice’ (sand) and get to a checkpoint in order to complete our mission.”

“As a first-year team (in the NASA competition), it’s hard because there’s no frame of reference for what you’re trying to accomplish,” Kueterman says. “We’re interpreting what other teams have done and doing it our own way. Each year it will get easier but, when you’re creating the process, anything can happen.”