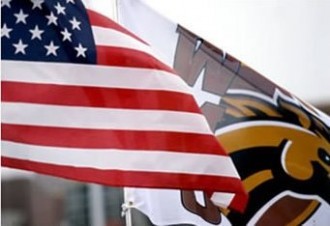 WMU students who registered to vote participated in elections at a slightly higher rate than at other institutions across the country that participated in a national study.

KALAMAZOO, Mich.—Western Michigan University's voter turnout increased from 18.5% to 31.5% in the 2018 midterm election among students registered to vote. This and other findings were revealed as WMU joined more than 1,000 campuses in all 50 states to examine their student registration and voting rates as well as climate for political learning and engagement.

The information was compiled in a database that includes nearly half of all U.S. college students as part of the National Study of Learning, Voting and Engagement. NSLVE is the signature initiative of the Institute for Democracy in Higher Education at the Jonathan M. Tisch College of Civic Life at Tufts University.

Also revealed was that registered WMU students voted at a slightly higher rate, or 55.9%, than the average voting rate for students at all participating institutions, or 55%.

WMU's 2018 NSLVE report has been received by WeVote, the University's non-partisan committee committed to voter education, registration and turnout, and will be used to develop strategies for campus initiatives moving forward.

"I'm inspired by the success of campus efforts to increase student voter turnout," says Jeff Breneman, vice president for government relations. "The WeVote initiative—a non-partisan group up of students, faculty and staff—spent countless volunteer hours on efforts to increase voter participation. As a result, 3,000 more WMU students voted in 2018 than 2014. Let’s continue to build upon this success. Doing so will send a clear message to candidates and, ultimately, our elected representatives that Bronco voters are informed, responsible and engaged in our government. This provides us a powerful voice in the political process."

The national report suggests a promising trajectory to student voting, but there is still much work to do. Moving forward, WeVote has identified a need to focus even more on voter registration. WMU saw a 3.3% increase in registered students, up to 61.8%, but the University trails the national average of 73.3%, which was up 8% from 2014.

Data from the NSLVE report will be used by WeVote and the Office of Government Relations to guide decision-making in continued efforts to increase civic engagement on campus. With the support of University administration, WeVote hopes to bring students, faculty and staff together to work on a wide range of collaborative activities to increase civic engagement on campus.

"WeVote has been incredibly successful in a short time at institutionalizing civic engagement at WMU. As a non-partisan organization, we have done a tremendous job connecting faculty, students and RSO's around campus in helping set a precedent for a civic-minded campus," says WeVote student coordinator Peyton Jorgensen. "As a student in my second year of college, it means so much to me to be able to already leave my stamp on WMU this early into my college career. I hope to continue to help develop WeVote, strengthen our relationships and increase voter turnout for elections at WMU for the future.”

Student understanding of the mechanics of voting, their civil rights, as well as the impact of their vote, are priorities for the campuswide initiative. For more information or to get involved, email or visit.