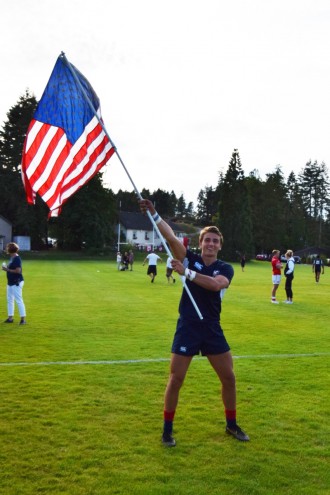 Brown waves the American flag on the rugby pitch.

KALAMAZOO, Mich.—Hitting the books and hitting opponents—Noah Brown is mastering both. The freshman from Mishawaka, Indiana, is diving headfirst into aviation flight science while also training to compete against the best rugby players in the world.

He'll represent the United States in the World School 7s international tournament. Scheduled for Friday and Saturday, Dec. 13 and 14, in Auckland, New Zealand, the under-18 tournament showcases elite rugby talent from around the world.

"It feels larger than life. I really am blessed with this opportunity," says Brown. "I worked extremely hard for it, and I’m glad to see it paying off in huge ways. I'm excited for the future and what else I can accomplish after this; this is just the start."

A standout rugby player at Penn High School, Brown was recruited by USA rugby coach Brendan Keane at the National Rugby Championship in Utah in May 2019. He traveled with Team USA to Canada over the summer alongside one of his high school teammates.

"It was awesome; I don’t think it's really hit me yet," Brown says of playing rugby on the world stage.

His combination of raw talent and skill is a welcome addition to the WMU men's rugby club, which won its first-ever MAC title in the spring and is competing for the Division I-AA national title this weekend in North Carolina. Now, he'll represent the Broncos in New Zealand. 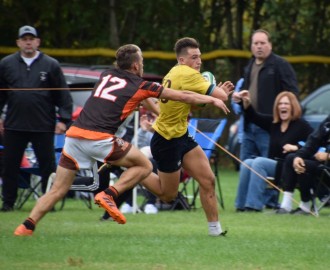 Brown runs the ball during a game with the WMU men's rugby team.

"I'll definitely have that pride going over there, being part of Western," Brown says.

In addition to competing, Brown will also have the opportunity to do some sight-seeing in New Zealand. But he's most excited to attend a practice with the New Zealand Blues.

"Seeing the pro team practice and meeting them is going to be crazy!" says Brown, who isn't ruling out a professional career if the opportunity presents itself.

"I'm getting my ground classes done right now," says Brown. "Hopefully I'll be able to get a flight spot in the summer or next fall."

Balancing school and training routines, Brown is driven to take both his rugby and aviation dreams to the highest level possible.