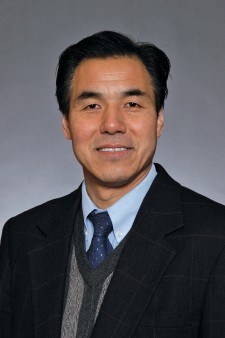 Dr. Chansheng He has been recognized among the nation's top scientists as a 2019 AAAS Fellow.

The American Association for the Advancement of Sciences has named Dr. Chansheng He a 2019 AAAS Fellow, citing his distinguished contributions to the field of watershed hydrology, particularly using models and spatial technology to study the dynamics of water and nonpoint source pollution.

“This is a wonderful and well-deserved recognition of Chansheng’s outstanding scholarship,” says Dr. Carla Koretsky, dean of the College of Arts and Sciences.

The hydrological models He has developed with his collaborators have been successfully applied to over 40 watersheds in the Great Lakes basin, as well as watersheds in China and other countries.

"We want to incorporate simulation models and spatial technology to help researches better understand the hydrologic process—how the water moves—in the different systems and also support our decision makers so they can target specific areas for protection," says He, who has been teaching at WMU since 1995.

"For example, in the Kalamazoo River, we examine how our activities, our conversion of land cover—from forest to agricultural land or urban centers—impacts the amount of river flow."

He was named a distinguished faculty scholar by WMU in 2015 and honored with the College of Arts and Sciences Faculty Achievement Award in Research and Creative Activity in 2007. He has earned numerous awards for his teaching and research, including the Fulbright Senior Specialist Awards for his teaching visits to Shanghai Jiao Tong University and The University of Bucharest, Romania.

"Think wisely, work diligently and achieve one goal at a time,” says He.

More than 400 members of the AAAS have earned the lifetime distinction of AAAS Fellow, in honor of their invaluable contributions to science and technology. The newly elected Fellows represent sections, ranging from neuroscience and psychology to social, economic and political sciences. Beginning in 1874, thousands of scientists have been elected including Maria Mitchell, Margaret Mead and Thomas Edison.

He and other fellows will receive an official certificate and a gold-and-blue rosette pin at the annual AAAS meeting in Seattle, Washington, Feb. 12-16, 2020.