Leah Barton, a manager technician in the virtual reality lab, holds an early prototype of a 3D-printed map of the fourth floor of the College of Health and Human Services, where the Department of Blindness and Low Vision studies is located.

Beauty is in the eye of the beholder. Or in this case, the hand.

Anderson, an assistant professor of blindness and low vision studies, is holding a 3D printed map of the fourth floor of WMU’s College of Health and Human Services.

The white plastic model may not look like much. There are no bells and whistles; no colors or labels. But this could be a map to a new world for students with visual impairments and their future teachers.

“We’ve seen 3D maps in the past that were beautifully designed, but that were missing the function for people who are blind and visually impaired,” says Anderson. 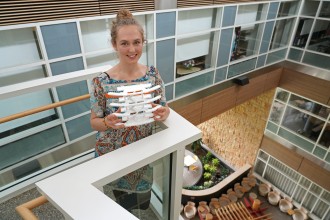 Abby Tongue researched the feasibility of completing 3D-printed maps of the CHHS building.

Graduate assistant Abby Tongue got the ball rolling to turn Anderson’s vision of a functional tactile map into a reality, researching the feasibility and enlisting the help of WMU’s virtual development studio.

“We were just getting our studio off the ground and were looking for interesting projects that used 3D media,” says Kevin Abbott, interactive media specialist in the Office of Information Technology. “This project ended up being a great fit, so we took it on.”

Sales student Leah Barton, a manager and technician in the virtual reality lab, worked with Tongue on designs for models of the College of Health and Human Services and a detailed map of the fourth floor of the college, where the Department of Blindness and Low Vision studies is located.

“Through trial and error, we decided just using the hallways would be the best approach for the smaller model, and we left the detail to the fourth-floor larger model,” says Barton. “We didn’t want the features to be too sharp or too jumbled, because you wouldn’t be able to get a clear reading of anything.”

After several attempts, the team crafted models sturdy enough to withstand heavy use and detailed enough to be functional.

“I’ve shown this to a lot of my friends who are blind. One of them said, ‘I didn’t realize the hallway was bent. I wondered why I kept drifting to the right and my cane kept hitting that side of the hallway!’ Another friend didn’t realize they’d been passing an elevator on their way to class every day,” says Tongue, who is studying teaching students with vision impairments as well as orientation and mobility for children.

“We take information like that for granted, but for him it was empowering because now he can take that elevator if he wants.” 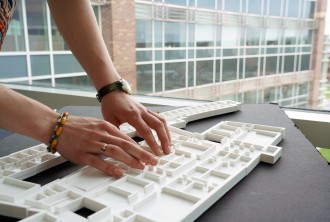 Both 3D-printed models will be kept in the Department of Blindness and Low Vision Studies so that students can use them for reference. They’ll also be utilized as teaching tools.

“We teach a class that all orientation and mobility specialists go through where they are under a blindfold two to three hours a day and have to learn indoor and outdoor skills,” says Anderson. “For basic indoor travel, this will help them understand how the building is put together and how to plan a route from point ‘A’ to point ‘B’ and then effectively and efficiently get there.”

Teachers, Anderson says, can also learn from these 3D models. 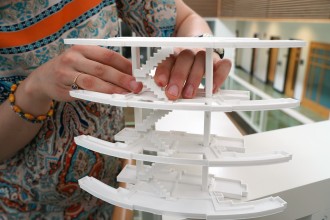 “We have to teach people who can’t see the environment how to understand it,” says Anderson. “We’re looking at understanding the concept of four stories. If you can’t see the building and recognize how large it is, if you can’t conceive of the fact that a staircase on the first floor is in the same place as a staircase on the second floor, just one story above; that concept can be very difficult to learn.”

Anderson and Tongue presented their research on 3D printing and concept development for students with vision impairments at the annual Michigan Association for Education and Rehabilitation of the Blind and Visually Impaired. The presentation gave teachers from across the state a chance to interact with the models and get an idea of how  they could work.

The successful development of these maps could lead to bigger things at WMU.

“We’re looking at possibly doing a model of the entire campus so that our students in disability services could share it with anybody who’s visually impaired on campus,” Anderson says. “It could include the topography of campus and be used by people with mobility issues as well.”

While it would be a large undertaking, Abbott says a map like that isn’t out of the realm of possibility.

“A lot of data exists already that can be turned into 3D. There’s almost certainly opportunity to take advantage of stuff that’s already there and use it creatively,” Abbott says. “That’s part of what students who work with me learn. They determine what the goals are and how we use our tools to solve real-world problems." 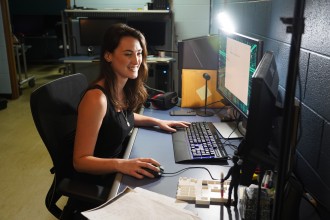 Barton hopes this experience will help her reach her goal of starting a career in 3D design.

Barton, who recently graduated April 27, is drawing on this experience as she pursues job opportunities. Her ultimate goal is to start a career in
3D design.

“The companies that have shown interest in me so far have really loved that I have a business background because I understand the process from both the creative and administration side,” says Barton.

But there’s more to this project than bolstering her resume.

“The biggest joy that I’ve gotten out of this project is knowing it will be helpful to other students. As a student myself, I know that going to college is already hard; I can’t even wrap my head around trying to do it with blindness or low vision,” Barton says. “So knowing that I contributed even a little bit to helping them navigate their experience in an easier and better way, that’s all I want from it.”

The VR development studio was created after Abbott received a transformational grant from the University.

“There’s a need on campus. We’re seeing stuff that’s coming out of the woodwork as more and more of these 3D-based digital tools are being used,” says Abbott. “It’s a great experience for the students working on these projects, because they get to tackle essentially real-world problems.”

Abbott’s team is collaborating with WMU’s Bronson School of Nursing on a simulation for students as well as an application for the theatre department that allows students to interact with famous architecture. He’s also been contacted about using 3D printing to make bones for anthropology students to study.

Abbott hopes to continue to build and develop the virtual reality programs
on campus.

“It’s taking off in so many industries. With professions evolving, there’s a ton of need,” he says. “If we can have the opportunity for students to not only graduate with expertise in their major but also have some idea to start thinking about VR development, it will be really beneficial both to them and their employers.”