KALAMAZOO, Mich.—As 2019 draws to a close, some 1,700 Broncos are ready to face the next decade, diploma in hand. They'll officially become Western Michigan University alumni on Saturday, Dec. 14, during the University's 327th commencement exercises. 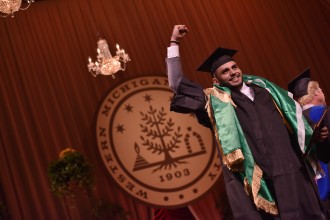 Among the graduates are 61 military veterans and nearly 200 international students. There are sons and daughters, parents and even grandparents with dreams as diverse as the students who will walk across the commencement stage. Lives transformed by the education, support and experience they received at WMU.

"All across this campus, every day, we are proving that WMU is a place for students to become. It’s a place where passions are ignited, knowledge is embraced and character is formed," says President Edward Montgomery.

"Our students bring the drive to develop their talents, to unleash their creativity, and they get to embark upon an educational journey that empowers them to make a real difference in the world, no matter which sphere they chose to enter." 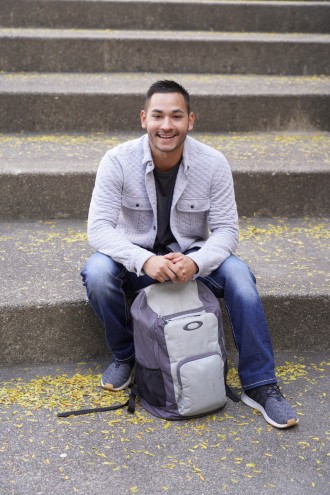 Since he can remember, Jason Olinger has had dreams of taking the helm of his family's business alongside his older brother.

Olinger's dad founded Alternative Systems in Kalamazoo in 1996, the same year he was born.

"We do custom molding—anything from car wash rollers to crash test dummy heads to fixturing for knee and hip implants," says Olinger. "As soon as I could work, even though I couldn't really create products yet and could barely walk, I was out there sweeping."

Before his dream could become reality, his father told him he had to get a college degree. Olinger's love of math initially drew him to engineering, but he was recruited to play soccer at Olivet College, and they school didn't have an engineering program. So, he started to take business classes. A year in, he decided he wanted to be closer to home, and he transferred to WMU.

"My dad was going through some health issues before I went to (college) … that was a huge factor. I needed to be home to support my family if need be."

Olinger found his passion at WMU.

"Being part of the number one sales program in the world, that alone speaks for itself," Olinger says. "In project management, professors Derrick McIver and Doug Lepisto are brilliant with their idea of learning by doing and learning by failure, not so much learning by textbook or test, because you're not going to really do that in the real world."

Last year, Olinger worked on a project to develop and launch a philanthropic wine brand. A year later, Bronconess wine is available on store shelves across Michigan. He and his team also helped a local company with an artificial intelligence problem. 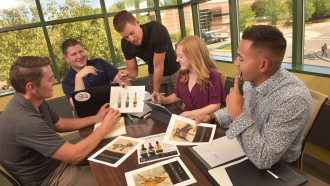 Olinger, far right, and his team work on the Bronconess wine concept.

"Western has opened my eyes to working through those critical thinking problems or those tough situations. The stuff that we learned in those experiential classes I'll take with me forever."

Now, Olinger's dreams are in reach. He's graduating with a bachelor's degree in sales and business marketing, and he may even pursue a master's degree down the road.

"There's really only been one thing between me and my dream—my education," says Olinger. "Western's sales program fueled the fire to get me thinking about what I can do with the family business, and I'm ready to take on a new challenge.