In our politically polarized reality, civil conversations may seem like a utopian fantasy. Dr. Rudolf Siebert, professor emeritus of comparative religion, is looking for the light at the end of the tunnel.

"Our political discourse has really declined in the world. What we want to do is see it come to a level where people can quietly and rationally talk about these things."

A pioneer in the critical theory of religion, Siebert—who retired in August after 54 years at the University—has spent decades working to bridge the ideological divide.

“There’s tension. We have all of these culture wars, whether it’s stem cell research or abortion or whatever,” Siebert says. “These culture wars come from that split between secular and religious, and they go deeper and deeper.”

“His life’s work has been trying to bring people together and talk through their problems, and to come to some sort of common understanding and agreement so they can proceed forward in a peaceful manner that makes for a better world for everybody,” says Dr. Stephen Covell, chair of the Department of Comparative Religion. 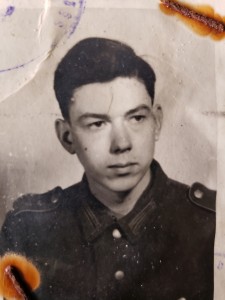 Siebert’s unique perspective was forged as a child. Growing up in Frankfurt, Germany, he was just 6 years old when Hitler came to power.

“His biography is inseparable from his teaching or from his philosophy,” says Dustin Byrd, an alumnus who considers Siebert a mentor. “He learned at a very early age what power was, what corruption was, what racism was.”

An encounter with an elderly woman on a walk to elementary school as a boy still haunts him.

“She was carrying two suitcases and kept stopping. I thought, as a good Catholic boy, I had to help her,” recalls Siebert, who loaded the suitcases onto his bike and walked alongside her, noticing the yellow star on her coat. “She said police had been to her house and told her to carry everything she could to the basement of my school.

“We rolled down to the air shelter where already hundreds of Jews had been collected to be transported east. The police had told her she would be brought to a nice village, free from the bustle of the city, and she would have a nice place to live out her life. We did not know that they were going to death camps.”

An SS man at the school scolded Siebert for helping the woman, whom he was forbidden to talk to because of her Jewish faith. But all he could see was a woman who looked like his grandmother. Siebert knew what was happening  wasn’t right.

“(Upstairs) at the school they read Plato in Greek and read the Torah in Hebrew, and teaching was highly humanistic,” says Siebert, “but down in the basement
there was this degradation of human beings and people sitting and waiting for the gas chambers.”

As a member of the Catholic youth movement, Siebert spoke against fascism but was ultimately drafted and—after refusing the order—forced to join the German Air Force at gunpoint in World War II, at the age of 15. He justified his service with the obligation he felt to protect the innocent people in his city from airstrikes by allied forces.

“You have to make ethical decisions,” says Siebert. “You know so little of the circumstance in which you make this decision, and that is scary in a certain sense that one knows so little when one has to make such
big decisions.”

Video of Waging Peace
Eventually taken as a prisoner of war on Easter Sunday 1945, the theme of religion is indelibly woven into the fabric of Siebert’s life story. While being transferred between prison camps, a gesture of kindness forever changed him.

“We were stowed in an animal car through Alsace-Lorraine, and I became unconscious because I hadn’t eaten or drank anything in days and was hit by a stone thrown from outside,” remembers Siebert. “A Protestant minister gave me his last water, and that woke me up again. I became an ecumenical person for the rest of my life.”

Siebert traveled with other prisoners of war to Africa and was eventually brought to Camp Allen in Norfolk, Virginia. Along with tens of thousands of others, he was tried to determine his role in the war.

“The Frankfurt School, which was an institute for social research at Columbia University, argued there were Germans who had not been Nazis, and maybe one could get help and train them in order to transform the fascist state into a liberal state,” Siebert says. “As members of the Catholic Youth movement, we had helped Jewish people by hiding them in the basement and (secretly) spread the letter of a bishop who was protesting concentration camps and saturation bombing.”

Siebert was among about 20,000 captured troops deemed unsympathetic to the Nazi cause who were trained and sent back to Germany to spread democratic ideals.

“I taught in the German school system, taught for working class people in the trade schools, taught in university,” says Siebert, who also continued his own education, obtaining master’s and doctoral degrees while also moving forward the critical theory of religion.

“He’s well known around the world for what he’s done,” says Byrd. “He took what (the Frankfurt School) began, their critical analysis of religion, and developed it well beyond what they had done. He opened up the doors to understanding religion from a critical, philosophical perspective.” 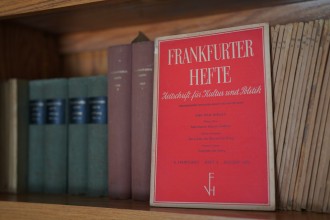 The Frankfurter Hefte was created during efforts to democratize Germany after the war.

In the early 1960s, a social theorist involved with the Frankfurt School—which had moved back to Germany after the war—made a grim observation.

“Maybe this whole hellish thing that we had in Europe, this fascism, could happen in the United States,” Siebert says. “I had worked in Germany as much as possible, so I decided with my wife and family that we would come back here because we wanted to fight it.”

So, the family moved to Baltimore, Maryland, where Siebert taught with Jesuits. Through his work there, he was connected with a Jesuit at WMU interested in starting a religion department.

Siebert came to WMU in 1965. During his tenure, he helped found WMU’s chapter of the American Association of University Professors, directed the Center for Humanistic Future Studies, founded two international conferences and wrote dozens of books and articles. He also taught thousands of students.

“He really teaches his students how to think critically about the world,” says Byrd. “It begins with thinking critically about religion, but then it expands into politics, economics, philosophy, law and all these other things.”

Siebert’s investment in his students extended far beyond the classroom—inviting students to international conferences to help them network, co-publishing books and editing volumes with them.

“He did a lot,” says Covell. “For him, it’s not about him. It’s about something much bigger.”

Siebert has also hosted a weekly lunch for decades, inviting students, friends and family to come for fellowship and discussion. He even built an addition onto his house for students to live in while they studied with him.

“Knowing you’ve got a faculty member that’s going the extra mile and is really supportive and wants to see you succeed and taking those extra efforts is something students really thrive on,” Covell says.

Some argue the work Siebert’s done is more important now than ever.

In order to continue his work, and to ensure WMU remains a driving force in advancing the field, the Department of Comparative Religion is looking into the possibility of creating an endowed position in Siebert’s name.
“He’s such an important person in the field, and he’s influenced so many disciplines,” Byrd says. “It’s imperative that Western finds a way to continue his legacy.”