Bronco footballer scores accolades for impact off the field

"What he has done serving others off the field, along with his work in the classroom and on the playing field, represents what the Wuerffel Trophy is all about," Wuerffel says.

Wassink talks with another student in a study room at the Haworth College of Business.

"It's always something I've tried to take very seriously," says Wassink, who earned a bachelor's degree in accountancy in the spring and is currently pursuing a master's degree in the field, carrying a 3.95 GPA. "I've always tried to work hard in school and give back to the community. That's just the way that I was raised and what I believe in."

Wassink volunteers with his teammates at organizations like Ministry and mentors youth through the Bronco Buddies program at Tree of Life school. He also completed a spring break mission trip to the Dominican Republic in 2016, helping build a basketball court and repair fences in a small village.

He credits the coaching staff with encouraging him and his teammates to use their influence for good.

"They really push us to give back and also take academics very seriously." 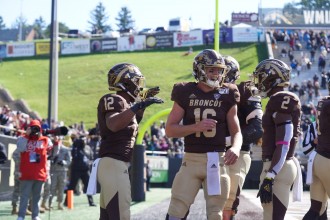 Wassink, center, talks to Bellamy, right, during a game.

Along with the Wuerffel Trophy, Wassink was also a finalist for the Willam V. Campbell Trophy—considered the academic Heisman—and the Senior CLASS Award, which recognizes athletes in their final year of eligibility who demonstrate excellence in four areas: community, classroom, character and competition.

"Jon maximizes everything he does. He's a joy to have on the team," says head football coach Tim Lester. "He's making a difference with teachers and in the community and is a joy to have around."

He's not the only Bronco earning big praise this year. Senior running back LeVante Bellamy was voted 2019 Mid-American Conference Vern Smith Leadership award winner as well as the league's most valuable player and offensive player of the year.