It’s not why the chicken crossed the road, but how drivers behaved when it did, that interests Dr. Ron Van Houten. The Western Michigan University professor's pedestrian traffic safety research is garnering national attention—and saving lives in the process.

"Everybody knows speeding is wrong and hitting people is bad, but there are still a record number of pedestrian injuries and fatalities," says Van Houten, professor of psychology, whose research earned him an Outstanding Traffic Safety Achievement award from the Governor's Traffic Safety Advisory Commission in Michigan as well as the Institute of Transportation Engineers.

Much of the recognition Van Houten is receiving is for his work developing the gateway treatment—placing signs on the edge of the road near crosswalks that drivers have to travel between.

"It not only increases yielding, it reduces speed at crosswalks," says Van Houten. "We went from baseline at some sites of 3% to 80% of drivers yielding to pedestrians."

His research, which has yielded remarkable results, includes a first-of-its-kind study years ago in Orange City, Florida, where a troubling number of children had been hit by cars going to and from school.

One major contributing factor, says Van Houten, was a lack of sidewalks. But he also noticed that hardly any drivers were actually following the posted speed limits. So, he suggested enlisting police to strictly enforce the law when children were walking to and from school, along with an education campaign that highlighted the current crash statistics.

Some worried about pushback and public outcry, but Van Houten drove home the motivating factor of the enforcement: child safety. Turns out, he was right.

"Not one more kid was hit going to and from school in the next three years. That was the end of the speeding. That's what it takes to make a change. You've got to get people to believe first, because if they don't, they're going to fight it."

Word quickly spread, putting Van Houten and his students in high demand. He's since trained police on pedestrian operation enforcement across the country, from New Mexico to New York.

Video of Paving the way for pedestrian safety
Education, engineering and enforcement make up the recipe for success Van Houten has implemented time and time again. In fact, his gateway treatments increasing the yielding distance for drivers around crosswalks have driven such impressive results that the Federal Highway Administration is considering modifying standards in the Manual for Uniform Traffic Control Devices to reflect his findings.

That change could happen once Van Houten wraps up a yearlong study with the Florida Department of Transportation, analyzing gateways at 30 different sites across the state.

"We're doing this study to prove it's not just a regional effect," Van Houten says.

Jon Hochmuth, a doctoral student, has been helping Van Houten with the research.

"A lot of the reason the research has had such an impact is the difference in our methodology from sort of what people typically do," says Hochmuth. "It's much more detailed and targeted. We put these signs in the road and you watch behavior change right away. It's crazy. And that's not something that you see in a lot of research; it usually takes a lot of time."

The research also seems to have lasting results. Four years after a study in Florida, yielding continued to increase even though no more signs were added near crosswalks around the city.

"In a sense, what's changed is culture," says Hochmuth. "When you make a certain thing the most common behavior, even people who never experienced the treatment or intervention are going to learn from what's being modeled. 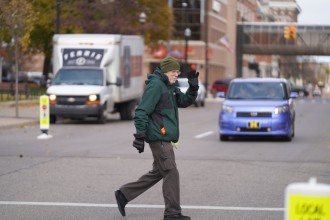 Van Houten has crossed many roads for his research, which spans decades.

Van Houten and his student researchers have also worked extensively with rectangular rapid flashing beacon—RRFB—technology, which involves placing a flashing light at crosswalks. It's a treatment that has become popular across the country.

"They reduce crashes by half," says Van Houten. "One of my graduate students—Jim Shurbutt—who led that study under my direction was hired by the Federal Highway Administration."

Hochmuth also helped Van Houten with a project in Grand Rapids involving the enforcement of a five-foot passing law for bicycles.

"Ron is doing work that produces real change in communities which, if I could only do one thing, is what I want to do: help people. And on the biggest possible scale I can."