Learning and Leading: Global Leaders use their skills to help refugees

Allyson Dykstra, left, and Haley Ritsema explored the desert in Wadi Rum, Jordan, during their study abroad experience with the Global Leaders program.

Surrounded by the crystal blue waters of the Aegean Sea, the Greek island of Lesvos is idyllic. But growing among the olive groves and fishing villages is Moria Refugee Camp, an encampment where some 15,000 people fleeing from war, terrorism and poverty in places like Syria and Afghanistan have sought refuge.

"Refugees risk their lives sailing on a boat there, trying to get to Greece so they can claim asylum," says Riley Richardson, who is majoring in global international studies and environmental sustainability. "It still shakes me to my core thinking about what they've gone through and how they are just trying to have a better life."

Richardson is involved in the WMU Global Leaders program, a registered student organization focused on leadership through service. The group spent the summer volunteering in and around Moria.

"We are building a new generation of leaders driven by compassion for the world's most vulnerable and bolstered by competence in humanitarian skills," says Sydney Fernandez, who co-founded the organization along with fellow students MacKenzie King and Marisa Weller.

An image painted by refugees and volunteers in Moria Camp.

A Kalamazoo Promise Scholar, Fernandez came to WMU in 2015 with plans to study Arabic and ultimately become a diplomat. Those plans changed spring semester during an immersive study abroad experience in Jordan, when a friend returning from Lesvos suggested he volunteer there. 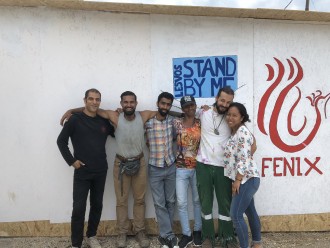 "I planned to go for two weeks and come back to Jordan," says Fernandez, who arrived at Moria Camp as an interpreter. "By the end of the first day I knew I was not going back to Jordan. I ended up spending a whole year working in the refugee camps that dot Europe."

Fernandez traveled around, volunteering with various nongovernmental organizations that provided food, medical care and other services to refugees. By the end of the year, he'd changed.

"My skin was a different color from all my time in the sun. I had long hair. I was in shape from lifting hundred-pound pots of boiling water. I spoke Arabic like it was a true second language. I was a different person."

He made a couple other detours before returning to WMU, but when he did, he was driven to share his passion for helping refugees with other students. After Fernandez, King and Weller established partnerships with partner nongovernmental organizations in Lesvos and rallied support from faculty, the Global Leaders RSO was born. 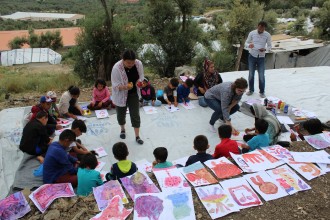 Global Leaders work on an art therapy project with children in the refugee camp. 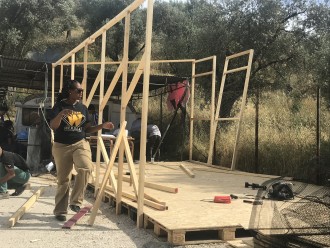 Adriana Echols directs the construction of a law office at the refugee camp.

Beginning in fall 2018, Fernandez and his team spent two semesters training students in leadership and humanitarian skills. They volunteered in Kalamazoo and learned the principles of compassion through service while also developing projects—vetted by social work professors in a multi-step review process—that they could implement in Moria Refugee Camp. Then, in May 2019, Fernandez and a group of 14 other students made the trip to Lesvos.

"I think the international, intercultural experience is one of the most important things that a student can experience," says Dr. Jessica Gladden, assistant professor of social work at WMU, who traveled with the Global Leaders. "You have to really see the situations that people are living in and talk to them and hear their stories in person to really understand that it's not the same everywhere in the world."

The WMU contingent completed a number of projects in and around Moria—many of which put the skills they'd honed at Western to the test.

"Everyone got a chance to do something roughly related to their academic skills, personal skills, and, of course, they did tons of adapting," Fernandez says.

Richardson, who grew up in Grand Rapids, Michigan, used her environmental studies background to help build a community garden, creating a sustainable food source for people living in the camp.

Adriana Echols, a geography major from Detroit, rolled up her sleeves and directed the construction of an office for an NGO that provided legal services to refugees seeking asylum. 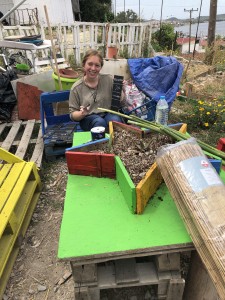 "It changed my perspective about the world and what we can actually do," says Echols. "To use the skills I had and help people that are displaced in the face of the refugee crisis that was happening in Lesvos was eye-opening to me."

"What this program did for me is help figure out what I want to do and how I can make an impact," Echols says.

In Lesvos, the impact stretched beyond the people Echols and her classmates set out to help.

"It's always valuable for the refugees because they need those programs. They need something to fill their time and attention and give them hope," says Gladden. "But for the students, they actually got to see and talk to and meet and explore different cultures and situations refugees were in, so I'm not sure who it was more important for."

The program's impact will also have a broader reach in 2020. King spent time in 2019 forging connections to expand Global Leaders to McLeod Ganj, India, where—after a humanitarian needs assessment—students will work with Tibetan refugees.