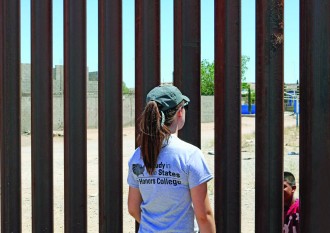 A student speaks with a child on the other side of the border fence.

Feet away and worlds apart, a small group of WMU students speaks to two young brothers through the bars of a tall, rust-covered fence separating El Paso, Texas, from Ciudad Juarez, Mexico.

“We were just chatting about school, what they do for fun,” says Dakota McCracken, an economics major from Kalamazoo. “One of the little boys asked me, ‘Are there bad guys over there?’ I said, ‘Yes, we do have some bad guys,’ and he said, ‘Oh, we have a lot of bad guys over here.’ Then he just kept playing and wrestling with his brother.” 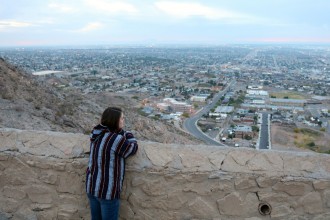 McCracken is among a group of honors students learning about immigration issues at the U.S.-Mexico border. They’re getting an inside look at what some are calling the “border crisis,” examining the driving forces behind record numbers of migrants making credible fear claims, hoping to be granted asylum in the United States. It’s part of the Study in the States program offered by Lee Honors College.

“It’s a hands-on learning experience,” says Kaylee Tegethoff, a political science major from Bloomingdale, Michigan. “You make connections and you get to develop yourself as a person versus just as a student.”

Denise Bowen, associate professor emerita of physician assistant studies at WMU, organized the trip. She designed the course to give students a front-row seat to the immigration issues making headlines and sparking debate across the country.

“I wanted them to be able to engage with people later, to talk about this and to maybe get rid of some of their misconceptions and help other people do that, too,” Bowen says. “It was definitely an immersion experience.”

“We were right there,” Tegethoff says. “You hear on the news thousands of people are coming to the border, and then you walk through the refugee center and there are hundreds of cots, hundreds of people, and it’s just, like, ‘Whoa!’”

Students stayed for a week at Annunciation House, a Catholic charity in El Paso that offers temporary shelter for refugees and migrants. As detention facilities along the border soar past capacity, U.S. Immigration and Customs Enforcement releases people into the organization’s care— sometimes to the tune of 700 per day. Most, says Bowen, are from what’s been dubbed the “northern triangle,” which consists of Honduras, El Salvador and Guatemala.

“There are groups of hundreds of people that are coming. They’re coming with their families. They want their families out of there; they just don’t want to be raising kids there anymore,” Bowen says. “The majority of the driving factors pushing people here are violence and poverty, I would say.”

The WMU students helped out at the shelter, cooking meals and handing out items to people as they were processed. The experience gave students the opportunity to interact with people in various stages of the immigration process.

“We talked with people who were just released from detention, who had ankle bracelets on (awaiting court dates), who were just granted asylum or who just got here from another country and were undocumented and were going to turn themselves in,” Tegethoff says. 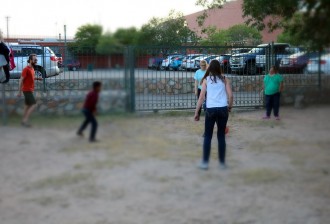 Of the 10 students in the class, only two were fluent in Spanish. Bowen prepared them for culture shock when they first arrived at the border.

“I tried to warn them that they’re going to feel uncomfortable,” says Bowen, stressing the fact that students would be surrounded by people who speak a different language. “But it didn’t mean that they couldn’t engage. There are a number of ways you can engage someone.”

It turned out, the key to breaking down those barriers was playing games with the people in the shelter.

“The kids were taking blocks and building towers. Pretty soon all these women came over and they all wanted to do it,” says Bowen. “So, there were all these teams of women who were building towers. Then the students would come and ask them questions and see them the next day and engage.”

Students were able to get to know some of the migrants, staying with them and hearing their stories of hope and heartbreak.

“One pregnant woman who was there toward the beginning of the trip was really excited because her husband and older child were already in Florida and she was going to meet them,” says McCracken. “She hadn’t seen them in months.”

“There was a young father and his baby staying at the house we were at. The baby’s mother had gotten deported again, but the little baby was there and had some serious health issues,” Tegethoff says. “The dad let me hold the baby, and I love little kids! But just to be there and know that they don’t necessarily know what’s going to happen to them next was sad.” 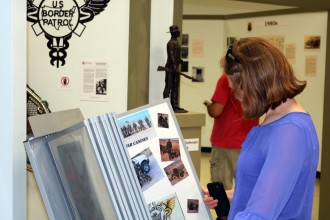 Tegethoff Looks through materials at the Border Patrol Museum.

From touring the border fence and Border Patrol Museum to observing immigrant court proceedings, students were able to examine immigration issues from a variety of perspectives.

“We saw some different immigration courtrooms. They’re so backed up. In the detention center, there are four rooms and four judges,” says Tegethoff. “They hear over 25 cases a day. Every morning, that’s just their daily workload, and it just grinds on and on. They’re backed up for months.”

The sheer volume of people detained at the border is overwhelming. Bowen originally set up an interview with border patrol for her class, but officers were so busy while they were in El Paso that the meeting was canceled.

“Border patrol is overwhelmed,” says Bowen. “I think the majority are just outside of their comfort zone, and they can’t do their regular job, either, because they’re dealing with this mass amount of people coming over.”

A Problem With No Easy Solution

Bowen says the situation at the border is much different today than it was the last time she visited several years ago.

“I read in one day alone, 1,700 people were apprehended at the border just in the El Paso sector, where we were staying,” says Bowen. “They’re coming with their hands up in the air saying, ‘Take me, please. We need to get to the United States.’ They’re not being chased down or anything, which was the case a year ago. Now it’s just this whole voluntary thing and the people who are coming are different. It’s family units.”

Once migrants attempt to claim asylum, they’re detained and given a credible fear hearing in a matter of days. If ICE officials determine their fear is justified, they’ll place the person on a list for an asylum hearing and send them to a detention center.

“If they’re not deported right away, and they have someone in the United States that’s a sponsor and they have children with them, then they’ll be released to their sponsors,” says Bowen, who goes on to say that many of those people stay at facilities like Annunciation House while they work out transportation to get to their sponsors. Then, they wait for their hearing. The process can take weeks or months.

“As somebody who’s rather impatient—I don’t like waiting six weeks for my passport to be mailed to me, and these people are waiting weeks, months, maybe even years to find out where their next home is going to be—that was kind of shocking and just makes me really think about it,” Tegethoff says. 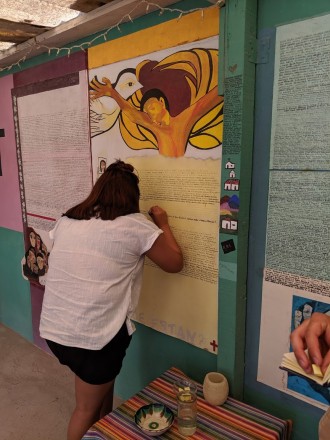 A student writes a message of hope on a mural.

The students also had a chance to hear the stories of young lives lost to violence across the border.

“That wrecked me,” says McCracken, whose ultimate goal is to be an economic development consultant working on policies to stop human trafficking. “I’m a youth group leader, and when I started my group was all 15-year-old girls. And the name on the paper I was given, she was also 15. I bawled like a baby.”

The victim Tegethoff learned about was 26 years old—not much older than her.

“This person died because of the violence in their city, with rampant crime and drugs and gangs and corruption in the government and enforcement. I just thought, ‘Wow,’ because I don’t have to worry about that, and I’m thankful for that,” Tegethoff says. “This is why rule of law and security are important, so that isn’t my story. But it was her story, so how can we help keep more people from experiencing that?”

The politically charged climate surrounding immigration and border security often puts people on one side of the fence or the other. Students on this trip—who all had very different views on the issue going into the class—came away seeing the lines are much more blurred.

“I’ve had some of the best conversations I’ve ever had with students during this trip, because we actually wanted to learn and we actually cared about the situation that was going on there. Even though we maybe had different core values or different beliefs, we just came together,” Tegethoff says. “I was definitely inspired and realized you actually can have discussions, believe completely different things and have good, helpful discussions that get you both to a better place.”

Bowen says while many students came away with different views on the priorities of the problems on the border, they all believe refugees deserve to be treated with dignity.

“If you stop treating people with dignity and respect, then everything falls apart,” Bowen says. “I don’t think anyone walked away thinking that they shouldn’t be helped somehow. There was no agreement on how, but at least some agreement that they’re all human beings and they all have these very real issues.”

“I learned more in the week I was in El Paso than I have in my whole life about immigration,” Tegethoff says. “I do think that everybody should go to the border who can. But if you can’t actually make it down there, you can still have conversations. You can still look at reputable sources. You can still talk to people on both sides of the issue to see where they’re coming from, even if you don’t agree with them.”