The nation’s largest conference for LBGTQ+ college students is coming to WMU. The Midwest Bisexual Lesbian Gay Transgender Asexual College Conference is expected to draw more than 2,000 people to Kalamazoo in February, and will focus on empowerment and education within the community.

It’s a celebration of diversity that follows a milestone for inclusion at WMU, where the Office of Lesbian, Bisexual, Gay and Transgender Student Services recently celebrated 30 years on campus. Created by graduate assistant Ronald DeVrou in 1989, the office was just the sixth of its kind in the nation at the time, and the second in the state. And its influence has blossomed over the decades.

“I really have seen it grow from everything done underground and working to make strides, and I think we’ve really done that well in making those strides as society has made those strides,” says Dr. Suzie Nagel-Bennett, associate vice president for student affairs and dean of students. “Absolutely we have work that we still need to do, but it has come a long way in what I consider to be a short amount of time.”

Nagel-Bennett remembers being in the room with the WMU Board of Trustees in 2006 when it voted to add gender identity and sexual orientation to the University’s nondiscrimination clause—a giant leap forward for the LBGT community on campus, led by the tolerance and acceptance the Office of LBGT Student Services had been working to foster for decades prior.
“That was huge; that was game-changing,” Nagel-Bennett says. “The institution at its highest level said we’re going to include these people, and we’re going to do it by a matter of policy.”

WMU prides itself on being a leader in celebrating the diversity of its campus community. 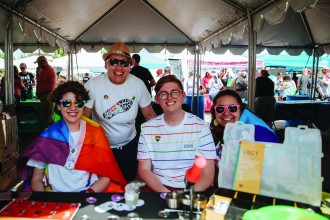 College is a place of self discovery, a place where students find their independence and decide the direction their life will take.

“You can’t go through academia and get your degree without feeling comfortable with who you are,” says Marshall Kilgore, an openly bisexual WMU student, “because (your sexuality) is something that you don’t get to turn on and off.”

The openness Kilgore found on WMU’s campus helped him choose the University over 16 other colleges he was accepted to.
“Out of 17 colleges, only one had an Office of LBGT Student Services that was broadcasted and supported,” says Kilgore, who remembers seeing the Out at WMU: Faces of Pride poster on the wall of the Bernhard Center as a pivotal moment in his college decision process. “Everyone was smiling, had their pronouns, sexual orientation and major. It moved something inside me. I was amazed.”
By all measures, he is a remarkable young man. A junior majoring in political science as well as communication, the Comstock Park, Michigan, native holds leadership roles in a number of organizations, both on and off campus. It’s a success story that might be much different had he not found the courage to be honest about his identity—both to himself and to others.

“I have been bullied, knocked unconscious, called every name in the book. I can go on and on about the terrible experiences that I’ve had that made me want to hide and hate that aspect of myself. If there was not the Office of LBGT Student Services, and if I had not decided to go to WMU, I would have been in hiding because I didn’t have any support.”

Students sit and talk in Spectrum House, a living learning community on campus that provides an empowering, inclusive and supportive environment for students of all gender identities and sexual orientations.

“I think a lot of the work we’re doing right now involves awareness and advocacy, as well as creating spaces for LBGT students to figure out their identities,” says Nathan Nguyễn, who directs the office.

That openness is something many students say they’ve found comfort and courage in. 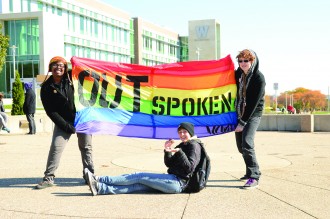 “Without my experiences at Western, and especially without the Office of LBGT Student Services, I wouldn’t be the same person I am today,” says Chris Mattix, a history major from Bangor, Michigan.

“A lot of the time, college makes you feel like you’re on your own. That can be great for creating independence, but when you’re also coming to terms with your identity, it can be very isolating. So it’s important to have the resources of the office.”

“As humans, we’re communal creatures. We’re social creatures. We need that support from people around us, and it’s even harder when you’re marginalized,” says Lewis. “I think the Office of LBGT Student Services is an example of what it looks like to bring together people who, for whatever reason, society has pushed away and reminding them that they have a place, they have a purpose.”

The Office of LBGT Student Services has developed programming aimed at emphasizing intersectionality and diversity, like Trans Thursdays and POSE—People of Shades Exclusively—which offer a variety of ways to get involved.

WMU also offers a number of programs aimed at educating and creating safe spaces for students, faculty and staff. 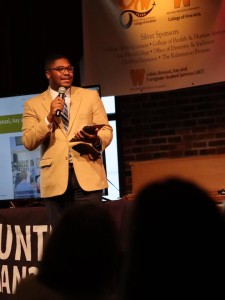 Safe on Campus, a training program launched in 1997, offers information about addressing homophobia, supporting students who are coming out, and understanding respectful language as it relates to the LBGTQ+ community. Participants who complete three hours of training get a door sign to display in their campus living or work space.

Sindecuse Health Center offers gender-affirming care for transgender and nonbinary individuals to align with their true self. That includes mental health evaluations and care, screening tests and gender-affirming hormone treatment.

“We are working feverishly to make sure that people know that they have a home here,” says Kilgore. “The Office of LBGT Student Services is a catalyst for all this change and inclusion that Western really drives home.”