From heartbreak to hope

Seth Sprung, Samath Him Sprung, Sokunthea Oung and Ravi Sprung stand together in the Bernhard Center.

Samath Him Sprung’s life has taken him around the world and back several times. The WMU alumnus has impacted thousands of lives with the school in Cambodia he helped found. But his accomplishments did not come easily.

A journey born from heartbreak and hope, Sprung grew up in a tumultuous time in Cambodia, when the Khmer Rouge ignited a bloody civil war. Facing an uncertain future, he saw his fortune change in 1975 when he stepped into a Buddhist temple with his father.

A priest told him he had a golden opportunity, he remembers, as American troops came to rescue orphans. His father made a gut-wrenching decision.

“I remember my father told me, ‘Son, if you have an opportunity to leave this war-torn country, go and never look back,’” Sprung says. “This was the last time I would ever see my father. He made a sacrifice for the betterment of my life. Those last few words would stick with me for the rest of my life.”

Sprung remembers the truck he was on being ambushed by insurgents on the road to the airport, but he and other young political refugees escaped and hid in a military bunker until a plane arrived to take them to the United States.

Just 14 years old in a country he knew nothing about, Sprung drifted through foster homes until he settled in with a family in Michigan. He learned English and graduated high school, but he struggled to find his place in higher education. Then, he found a home at WMU.

“It gave me a sense of direction, a sense of being professional and a sense of prosperity," says Sprung, who earned a bachelor’s degree in industrial engineering, as well as master’s degrees in economics and business administration. "Without Western, I don’t think I could be where I am today. Western really gave me the birth of a new dawn of opportunity in life.”

WMU also laid the foundation for a job opportunity that helped him reconnect with his family in Cambodia. It was something he never thought possible until a chance encounter with a friend led to the discovery of a letter from his mother. She’d sent copies of the note out 10 years earlier to connections in several countries, desperately searching for the son she lost that day at the temple. 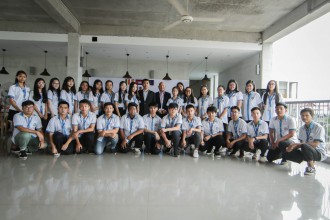 Sprung moved back to Cambodia and pursued business opportunities before starting a family of his own. When his oldest son began primary school, however, he found a new mission.

“The lack of quality education for my children forced me to open my own school.”

With the help of some other interested parents, the CIA First International School opened in Phnom Penh in 2004 with 12 students. Today, it has grown to a PK-12 international school with more than 3,000 students. Many of its graduates, including Sprung’s own children, have gone on to success at universities around the world.

Two of Sprung’s sons have followed in his footsteps and become Broncos. His eldest, Seth, earned a bachelor’s degree in entrepreneurship in 2018. Now, he’s helping his mother launch a restaurant and catering business.

“I find myself always working there when I go back, helping with ideas and bringing what I learned from WMU and my travels through all of Europe while studying abroad at Western,” says Seth Sprung. “I’m transforming what I’ve learned ... and making it work for our operation in Cambodia.”

Sprung’s youngest son, Ravi, is a freshman at WMU. Like his brother, he says he hopes to follow his dad’s lead and become a successful businessman. His father has high hopes, too.

“WMU will certainly teach him the tools he needs,” Sprung says.