From Hitsville to hit show, WMU alumna lives out childhood dream on Broadway 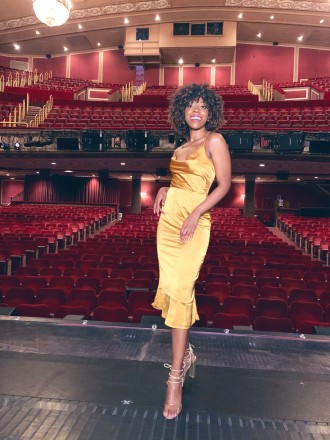 Tiffany Francés stands on stage in the Imperial Theatre, where she performs in "Ain't Too Proud—The Life and Times of the Tempations."

NEW YORK—As a kid, Tiffany Francés rode by Hitsville U.S.A. just about every day. The iconic Motown headquarters in Detroit was just a couple blocks down from her dance studio. She didn't know it at the time, but the view out of her car window provided a glimpse into her future.

A 2018 Western Michigan University graduate, Francés is living out her dreams on Broadway. She's dancing and singing six days a week in the Tony Award-winning show "Ain't Too Proud," a musical about Motown legends The Temptations.

"I have dreamt of this moment for so long. I finally get to wake up and go to my dream job every day," says Francés, noting that the play's Detroit roots give her debut even more meaning.

"It feels so good to represent our city in such a positive light and to be able to tell the story and be part of the Motown family forever."

A Springboard to Success

While it's been a long road to success since that drive to dance class in Detroit, Frances says all that work helped her feel at home on the Broadway stage.

"I definitely feel that all my training has paid off into this moment," she says, joining 90% of recent graduates who feel WMU prepared them for their profession. "With the help of Western and our program, I've just moved into this new stage of life so easily."

From the day she walked onto campus for a tour, says Francés, she knew WMU's music theatre performance program would be the place to propel her to the success she sought.

"Western's program was one of the first places when I went for my initial audition where I felt like I could really see myself being there as a home.

"Even in the audition room, when a few of us were struggling with some of the steps in the dance, the professors weren't so ready to just quit on us—they wanted to give people a chance and to genuinely see what we could do," Francés says. "That understanding made me feel like it was the place for me."

Putting in the Work 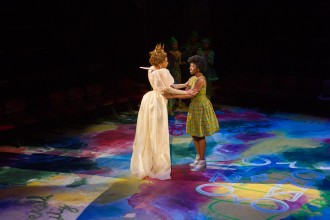 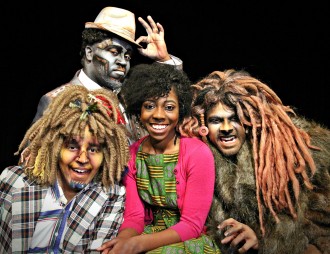 Opportunities for freshmen to dive right into the fray and get meaningful experience and feedback also piqued Francés' interest. She took full advantage of the freshman showcase and impromptu acting sessions.

"On Fridays we'd all run to the theater as soon as we could after class" to be chosen by directing students to act out their scenes, she says, with just 10 or 15 minutes to prepare. "I'm always on my toes now. You can throw anything at me, and I'll be able to make it something. I'm always ready to take direction."

Francés got her big break at WMU with the lead role in the University's production of "The Wiz."

"I related to Dorothy in ways that I couldn't even imagine. I was getting ready to head out to New York for my senior showcase and hopefully book an agent and start a career," she says. "It really was like I found my home and was ready to click my heels and go into the real world and find my way. And I think I did."

The senior showcase, which puts senior music theatre performance students in the same room with producers, modeling agencies, directors and other industry professionals in New York, is something Frances believes really sets WMU's program apart from others. It allowed her to build on the professional connections she'd established through Western and create her path to Broadway.

"I definitely think I made the right choice going to Western, and I hope they're really proud of me."