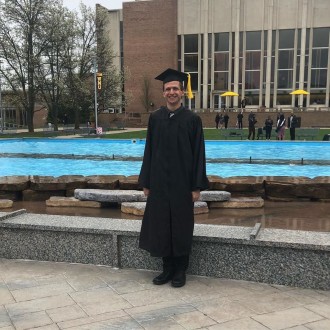 "I was talking to an exploratory advisor (my freshman year) and he asked me my interests. I mentioned things like technology and science, and he said, 'What about geography?'" says Taylor, who admittedly didn't know much about the field. "I took one class and fell in love with it."

These days, he's using satellite imagery to detect human infrastructure changes for government and private defense companies. The technology is similar to what he used in a funded research project he was involved in at WMU—a unique opportunity for an undergraduate in his field.

"We got to test out a new method of data analysis which had never been done before, so that part was really awesome." 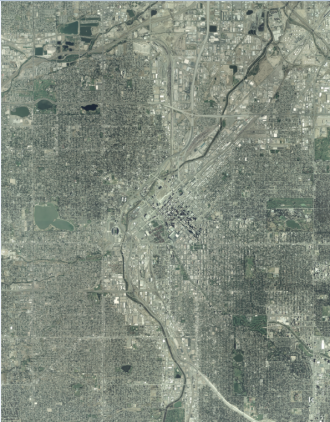 A mosaicked image comprised of six satellite images that Taylor used to assess the tree canopy changes in Denver.

With the help of Dr. Adam Mathews, he used satellite imagery and other technology to analyze the tree canopy in Denver, Colorado, where a project to plant one million trees in 20 years had been cut short—it was canceled after seven years. The goal was to determine what growth, if any, there had been, and where the project went wrong.

Taylor's research earned him an invitation to present at the IMAGIN GIS Conference the summer of 2019, right after graduation. His presentation generated considerable buzz—one person even approached him afterward interested in using the same method for a city government he works for.

"It definitely helped me in every way; professionally and personally," says Taylor. "It makes me more confident in my work and looking for jobs in general knowing that I have that edge beyond just the degree."

On top of an internship with the Oakland County Road Commission, the research also helped him score his job at Maxar Technologies in Ypsilanti. He brought up the project in his interview to demonstrate the direct experience he already had working with programs the company employs.

Taylor's success is echoed in a survey of recent WMU graduates—90% said their education and experience at Western prepared them for their profession.

"I think the program at Western is really great, especially because of the experience for undergraduates. Being out in the 'real world' for almost a year now, I've learned it's super competitive. Having that edge has really helped me."