Contact: Erin Flynn
February 19, 2020
Video of WMU partners with United Airlines to give aviation students a fast track to careers

KALAMAZOO, Mich.—Since he was five years old, Josh Carpenter's head has been in the clouds. His first ride on an airplane had him hooked.

"We were always interested in things with motors and things that went fast," says his twin brother, Tim, who also caught the bug. The siblings followed their aviation aspirations from their hometown of Commerce, Michigan to Western Michigan University. 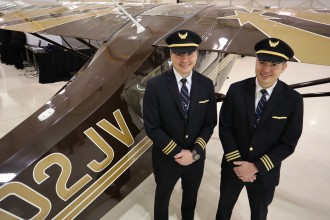 "It was awesome," says Josh. "I always had a study partner and a friend, along with some sibling rivalry."

Graduating in 2013, the brothers followed similar career paths—both eventually landing at United Airlines, where they are first officers.

A new partnership between WMU's College of Aviation and United will put students on a faster track to follow in their footsteps. The Aviate program offers applicants a new altitude of opportunity with the fastest path to a career with a major airline in the country.

"It's an honor that Western was recognized by United Airlines to create this program to help flow students through to an airline," says Suzie Targosz, a 2018 WMU alumna who now works as a flight instructor in the College of Aviation. 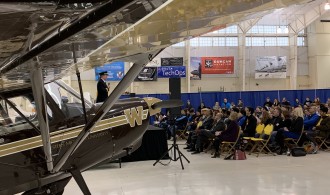 Capt. Curtis Brunjes speaks about the Aviate program to a crowd at the College of Aviation. 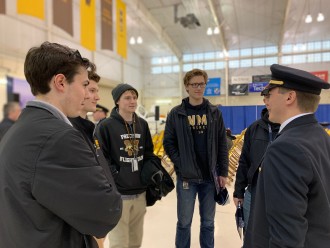 Students accepted into the Aviate program are required to get experience teaching as a certified flight instructor at WMU. Once they accumulate the minimum flight hours to earn their restricted airline transport pilot's license, they'll fly for a United Express Aviate partner. After successfully completing at least 2,000 flight hours and 24 months with that partner carrier, pilots will be able to transition to United as a first officer.

The streamlined trajectory is something that the Carpenter brothers say would have made their career decisions much easier when they were students.

"This gives you a defined pathway. You follow the rules, you meet the parameters and you have a guaranteed job at United Airlines," says Tim Carpenter. "It's priceless."

The new partnership means a lot to students like Tristan McClendon, an incoming freshman from Orland Park, Illinois, who chose WMU over several other aviation programs across the country.

"Western was, of the many choices, the one where it felt like they really wanted me to succeed. It's where I felt more at home and welcome."

Shaun Windhorst, a freshman who came to WMU from Eau Claire, Wisconsin agrees.

"I came to Western specifically for the aviation program because of the high standard it carries and the opportunities that come with it," he says. "Having Aviate come here reassures me that Western Michigan University has a high status in the airline industry." 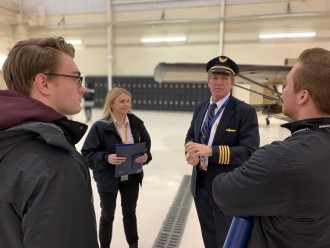 Suzie Targosz, second from left, talks with Brunjes about the program. 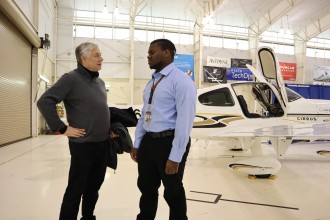 WMU is one of just four collegiate programs chosen by United to participate in Aviate.

"We think it's a top-notch school," says Capt. Curtis Brunjes, managing director of pilot strategy at United. "We think that the curriculum, the standard and the program at Western Michigan University generates the top talent."

Student aviators at Western are able to train on some of the most advanced aircraft in collegiate aviation, something Josh Carpenter says led to a "very seamless" transition to his career as an airline pilot. His brother, Tim, adds that the crew environment training in WMU's curriculum "replicates exactly what we do at the airlines."

"So, when you get to the airlines, you know how to study the material, you know how the basic flow of a flight deck and how to set it up, and those things combined will put you well ahead of others who don't attend a program such as this," he says.

The preparation is one of the many reasons WMU lands among the top three aviation schools in the nation.