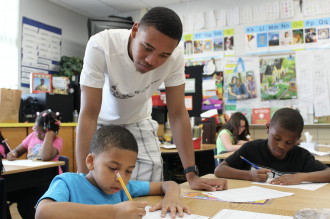 KALAMAZOO, Mich.—Remember that one teacher who most positively influenced you? For Western Michigan University Future Teachers of Color President and Future Educator Program Scholar William Wright, it was his fourth-grade teacher of color, Mrs. Wilson-Bridges.

Unfortunately, however, because there are very few K-12 educators of color, many students of color never experience being mentored or taught by classroom teachers from their same or similar background.

Recognizing the need to address this stark racial and ethnic population disparity between students and teachers, Western Michigan University is therefore taking the lead in uniting concerned and motivated individuals throughout the state who intend to alleviate the problem in various ways. To launch this effort, WMU will host the state’s inaugural Inspiring Future Teachers of Color Conference on Feb. 29, 2020. The event will have dual purposes: offer workshops for students, and bring together Michigan educators and officials for what organizers are characterizing as an alliance.

The conference will be co-hosted by WMU’s College of Education and Human Development, Future Teachers of Color student organization, Kalamazoo Public Schools, and The Kalamazoo Promise. Opportunities for mentorship, education, networking and visibility will be provided. Presentations will address topics such as the transition from high school to college, educator-related myths, and self-care for educators.

Alliance formation will foster statewide collaboration regarding financial, logistical and educational support services to help more students of color realize their teaching dreams and encourage others to consider entering the profession. According to Marcy Peake, the director of diversity and community outreach initiatives for the College of Education and Human Development, the alliance will help educators identify best practices, develop governmental advocacy initiatives, and “create pipelines and contacts” that will help students of color find the best ways to earn teaching degrees.

A Michigan League for Public Policy report highlighted the diversity disparity between teachers and students. It showed that, while a third of Michigan’s students were children of color in the 2017-18 school year, more than 90 percent of teachers and 80 percent of administrators were white.

The lack of teachers of color is not just a Michigan issue, but a nationwide problem. National Center for Education Statistics data from 2015-16 (the most recent available) show racial and ethnic minorities accounted for only 20 percent of all public elementary and secondary teachers in the United States. Yet those they teach were 51 percent nonwhite, the NCES found; and 39 percent of Americans overall represented racial or ethnic minorities during that time period according to the U.S. Census Bureau.

The IFTC Conference has its roots in Western’s Future Educator Program. Launched in 2016, the scholarship program was established with a $250,000 gift from former WMU trustee and alumnus, and founder of Global Automotive Alliance William F. Pickard and the Pickard Family Fund. It seeks to increase historically underrepresented population numbers in the teaching field. Advia Credit Union also sponsors one FEP scholar.

Wright will be one of the IFTC Conference presenters. As a student still in pursuit of his professional dream, his past currently informs his activist endeavors. Wright says he hopes to draw from Wilson-Bridges’ teaching methods and humanitarian efforts by being a touchstone one day for his own students, especially boys.

“I want them to know that education is the passport to your future and that you need to take advantage of it,” Wright says. “I want my students to know that, yes, we are here to learn, but I am someone that they can confide in and talk to whenever necessary. Having a positive and meaningful relationship goes a long way.”

In that respect, Wright is counting on the first IFTC Conference to also foster engagement and creative ideas among students, faculty and administrators at all levels. He considers the event an essential step in combating the teachers of color shortage by presenting opportunities for stakeholders to represent the majority while addressing important issues. Such conferences and other professional and networking resources for students everywhere are lacking, he says.

Wright’s presentation will focus on teacher-related myths he’s encountered as a teacher preparation candidate, particularly those that are supported via social media. 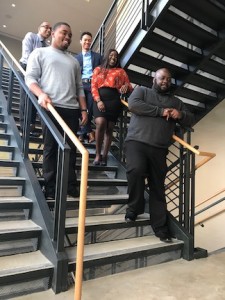 Washington Writers’ Academy Principal Lanisha Hannah-Spiller will be another IFTC Conference presenter. She will share how single motherhood influenced her professional quest. During a recent interview, Spiller said she knew she wanted to be a teacher by the time she was four years old. That calling never wavered, even when she became a parent her sophomore year of high school and later brought her son to college with her.

“I did not quite understand what the ‘big deal’ was at the time,” Hannah-Spiller says, but many others were skeptical of her goals, particularly when logistical challenges required her to bring her son to classes.

“It was a culture shock going to attend a lecture hall with 250 people and being the only person of color,” Hannah-Spiller says. “I’m a black female and sometimes I was a black female with a little boy with me.”

When she was 23 years old, she had her daughter, a WMU student and member of the new Future Teachers of Color organization that is helping to organize the IFTC Conference. Hannah-Spiller recalls the day she walked into a classroom being visibly pregnant with her daughter and holding her son’s hand. “The professor said, ‘This isn’t the place you should be,’” she says. Hannah-Spiller, however, continued to discredit that stance by carrying a full course load, which included triple minoring in early childhood education, math and science; working as many hours as she could, and finding time to volunteer at area schools too. Her love for children has influenced her educational calling.

Conference attendees will hear how Hannah-Spiller, who taught elementary and middle school students in various subjects before becoming an administrator (she was previously an assistant principal at Linden Grove Middle School and an administrator for Saginaw’s school system) cultivated a support system that enabled her to realize her career dreams, stayed on task, and overcame various obstacles, particularly those pertaining to race and gender.

Hannah-Spiller undoubtedly left a positive impression on many of her students, and continues to serve as an administrative role model for colleagues and students she oversees.

For Western Michigan University student and Lee Honors College member Sarah Giramia, who will also present at the conference, her favorite teacher was Mrs. James a third-grade African American teacher at King-Westwood Elementary, left the largest impression on the Future Educator Program and Kalamazoo Promise Scholar. Mrs. James truly “saw” Giramia, who came from a private school with high standards in Kampala, Uganda, and who recognized her learning potential.

“I had more White teachers than teachers of color and often in those classrooms, I felt like I had to prove that I belonged in those classes,” says Giramia, “that I was smart enough to be there and I had to work twice as hard as my White counterparts. I know that many of my friends who were students of color often felt the same way.” Giramia admits she soon became “complacent and comfortable with being mediocre. Mrs. James put me on the pushed me and put me on the path of success.”

Feeling like an outsider in their academic communities, which applies to most students of color pursuing teaching degrees, can them to second-guess themselves and steer them away from the teaching profession, which then means children of color lose out, Giramia points out.

“When you go to the teacher-student organizations and once again, you’re the odd man out, you aren’t sure if that’s where you want to be or the path you want to pursue. Being a teacher is one of the most important pillars that holds up society. But when you are at school and you don’t feel support and you go home and you don’t feel support, you go where you will get it and in fields that are highly celebrated and never get the chance to impact students who truly need you,” she says.

Giramia is bucking that trend. She plans to earn a Ph.D. to teach education courses and inspire others to enter the field. And, as a teacher, she intends to take a holistic approach that reaches beyond academics to also help students socially and mentally so that they can share their own stories and interact positively with others.

“I want to teach my students not only how to write narrative papers or learn new vocabulary or prepare them for standardized tests, but to also teach them their worth and their importance in this world. I want to make sure that after they leave my classroom, they learn something about the subject and something about themselves,” Giramia says.

Giramia's honors thesis project focuses on the lack of teachers of color. She is being advised by Dr. James Bosco, professor emeritus from the College of Education.

Giramia will join Wright in offering a presentation that will address and debunk teacher-centered myths. She will also speak about how she has formed a campus support system to help her navigate college.

For more information about the Inspiring Future Teachers of Color Conference, contact Marcy Peake at (269) 387-2904 or at marcy.peake@wmich.edu.