Music students slide to the top in national trombone competition 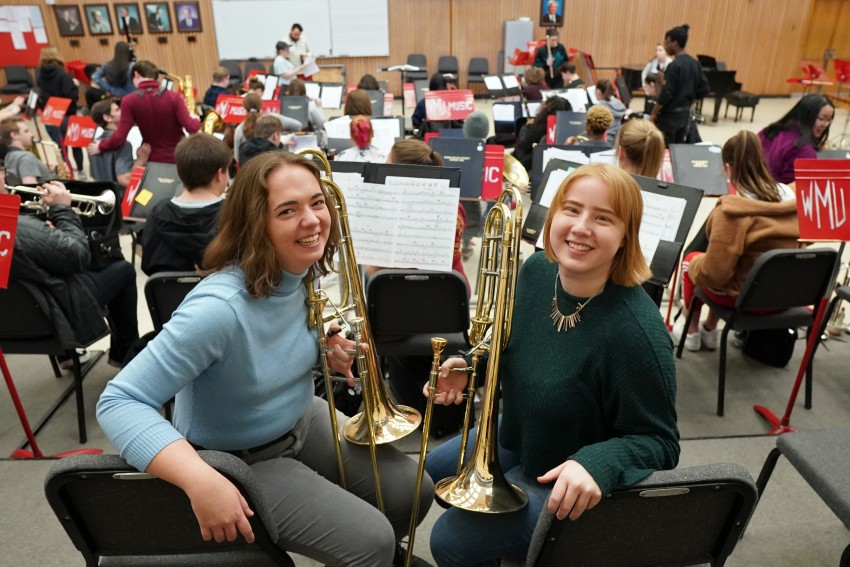 "This is the Army Band's home. It's built up on a hill and you overlook Arlington National Cemetery," says Steve Wolfinbarger, professor of trombone. "At one end of the of the base you see the U.S. Capitol off in the distance."

Rubbing elbows with top brass in the field is just one of the perks that comes along with being selected from a pool of hundreds to compete at this elite level. 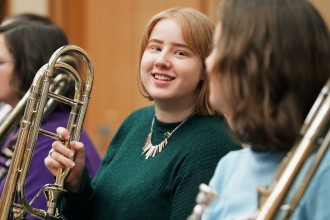 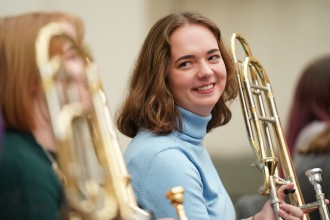 "This is a once-in-a-lifetime event, and I want to make the most out of this opportunity to perform," says Johnson. "I’m most nervous about playing at such a high-level event, since a lot of my idols will be there, and potentially judging my competition. It’s such an honor to play for them and even be in the same building as them, but also nerve-wracking."

O'Connell and Johnson, who are used to friendly competition as first and second chair in WMU's Symphonic Band, will now go head to head on the national stage. They've put in quite a bit of work to perfect their techniques, averaging between two and three hours of practice per day.

The competition, which will be live streamed on the U.S. Army Band's website on Thursday, March 5, is one of two major solo contests for trombone students worldwide. To have one student chosen for the finals is high praise for a program—two is virtually unheard of.

"This is huge. I think I can recall maybe one other time when there were students from the same university as finalists in one of the National Trombone Solo Competitions," says Wolfinbarger. "I'm incredibly proud. This will be something these students remember for the rest of their lives."

Will Ford, a 2018 graduate of WMU, is also a finalist in the Division III category of the competition.

Since 2005, trombone students from WMU have been semifinalists or finalists in the National Trombone Solo Competition more than a dozen times. The studio's reputation for elevating elite musicians is what drew both Johnson and O'Connell to Kalamazoo.

"I had looked at a lot of schools my junior and senior year of high school, but there was no teacher that I really clicked with. Then my primary lesson teacher recommended I reach out to his friend, Steve Wolfinbarger, at Western Michigan University," says Johnson, from Sioux Falls, South Dakota. 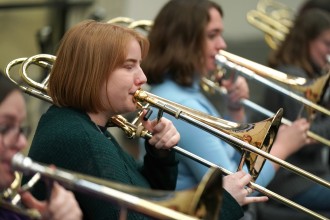 "No other school could really live up to the sense of community that he's developed in his studio. He's developed a culture of competition and excellence but also kindness. I can go to anybody in this studio and ask them for help, which is something you won't find at other top conservatories."

O'Connell, who grew up in Midland, Michigan, was also impressed by the WMU Trombone Studio's accolades. In fact, she bucked a family tradition of attending another MAC school to come to Western.

Wolfinbarger "was my top choice as a professor," she says, emphasizing the instruction she's already gotten only solidified the fact that she made the right choice.