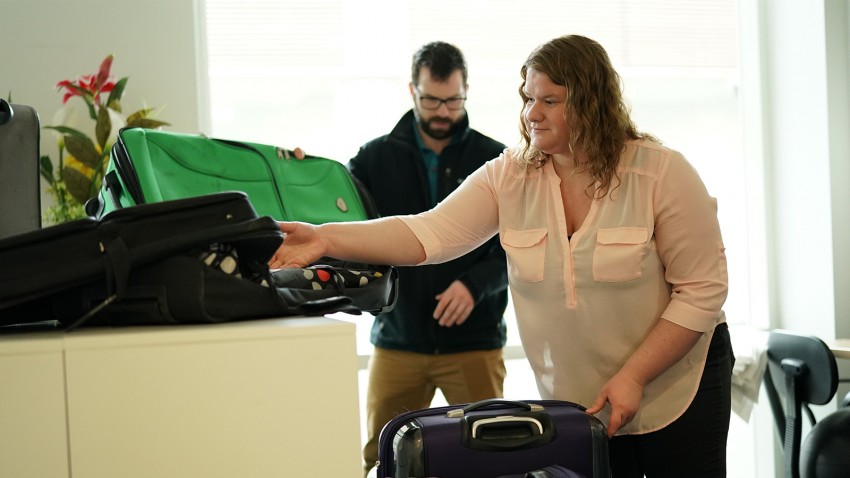 The Luggage for Love team at Western Michigan University collects suitcases for foster children in need of a way to transport their personal belongings from one foster home to the next.

KALAMAZOO, Mich. — Despite the COVID-19 pandemic, a noble community service project, conceived by graduate students from the School of Social Work at the spring semester’s start, is forging ahead.

Called Luggage for Love, the effort supports a simple concept: Foster children deserve and require compassion from the moment they enter the system.

From the child’s perspective, removal from their home can happen suddenly. When officials do so for abuse and neglect reasons many of us cannot fathom, those destined for the foster care system often rely on a repurposed product of last, but convenient, resort for transportation: garbage bags. Instead of holding rotting food, used tissues or soggy leaves, such bags are hastily filled with precious and necessary possessions like pajamas, school clothes or maybe a cherished stuffed animal.

Unsightly, flimsy trash bags are the standard carry-all containers for foster children throughout the country, even when they relocate from foster home to foster home, as some do throughout their formative years, according to those with personal and professional insight.

That’s why four WMU Master of Social Work students launched Luggage for Love. Funding to purchase luggage is being collected on the group's GoFundMe page. When pandemic-related distance mandates are lifted, Luggage for Love will make purchases and distribute the luggage, including the pieces that were collected prior to the COVID-19 outbreak, to foster children in need.

Foster care carries on while the COVID-19 crisis advances. According to Dr. Jim Henry, a co-founder of WMU’s Southwest Michigan Children’s Trauma Assessment Center, the Michigan Department of Health and Human Services is continuing to manage foster care caseloads as best it can. In most instances, case workers and caregivers are having to schedule virtual appointments, which is causing disruption to routines and grief for many. Therefore, children remain in need, even for items as basic as luggage.

There is another emotional element to this project: Luggage for Love has also teamed with WMU’s Seita Scholars Program to provide encouraging letters to luggage recipients; Seita scholarships support students who have lived some or all of their teenage years in foster care.

Leslie Hutchins, one of Luggage for Love’s organizers, and a former Seita Scholar who is now a social worker for the Michigan Department of Health and Human Services, knows firsthand what it’s like to be a foster child forced to use trash bags to carry their belongings.

“You kind of feel like you’re nothing, bouncing from one place to the next; and then you’re given trash bags. It just feels like you’re not really cared for in the system,” says Hutchins, who even used garbage bags to move to WMU her freshman year.

Had she possessed a sturdy piece of luggage as a foster child, Hutchins says she would’ve felt like “someone actually cared.”

“This may seem minor to some people, but to someone who’s literally coming from a home that doesn’t have anything, it means the world,” says Hutchins, who received a bachelor’s degree in social work in 2015.

“I think we can all rally around this idea that dignity and respect are the two biggest things that really any human being desires and needs. They are the foundational things that we need to be happy, healthy and functional members of society,” says another luggage program founder, Stephen Weaver, a clinical trauma interventionist at the Children’s Trauma Assessment Center. “If you don’t have those two things, you’re not going to be able to build a self-esteem strong enough to get through the hard times. So, Luggage for Love is just a start, but I think it’s a really strong start.” 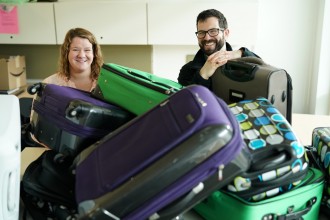 Hutchins and Weaver say letters from Seita Scholars will also emotionally help the foster children who will be served; those experiencing multiple housing transitions and behavioral issues caused by trauma, some of it compounded and complex, will realize they are not alone in facing those challenges.

“To think that there would be a letter in the luggage, and knowing that someone experienced this already, will mean so much to them,” says Hutchins.

“We’re not there to say, ‘Your troubles are all over,’ because we know that we can’t promise that,” Weaver says. “So, I think these letters really are there to say, ‘We see you, and we know you because we are you in some sense of having been there.’”

Luggage for Love was developed from an assignment for the spring course Social Work in Task Groups and Organizations. The four students, who also include Liz Powers and Alexis Brannan, decided to pursue something that would have an immediate and positive impact on some of the region’s most vulnerable youth. Each student has a passion for working with children, and for the project they created.

“I love this,” says Hutchins of Luggage for Love.

“It is really exciting, and it’s a conversation starter,” says Weaver, who in 2013 received a bachelor’s degree in interdisciplinary studies with a focus on religion. “People might know that foster care kids don’t come from the best places and that maybe they don’t have all the things that they need. But when you open up the floor to that conversation, there’s a lot of advocacy and education that can happen about what it’s actually like for them and what they’re up against.”