For the birds: Avian adventures at Asylum Lake Preserve

KALAMAZOO, Mich.— Oblivious to the COVID-19 pandemic, a white sandhill crane that sailed overhead, while a male mallard meandered downstream. Within Western Michigan University’s 274-acre Asylum Lake Preserve on a recent weekday morning, several bird species were observed building nests, flying, paddling, eating and calling to one another and even battling, in some cases.

Birdwatching at the preserve, which offers a publicly-accessible visual and symphonic feast, remains an easy, free, soothing and educational option amidst social distancing mandates and closures that have altered life as we knew it.

No birding experience? No problem. This inspiring hobby only requires a sense of adventure, a fondness for fresh air and the ability to quietly observe. 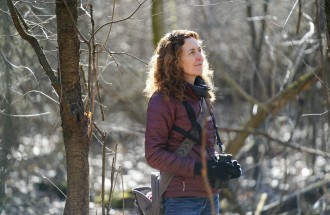 Why Go Birding at Asylum?

Giving more consideration to bird activity reveals an expanded world that offers vital reconnection with nature, which may be more important than ever as the pandemic continues to wreak physical and emotional havoc on humans throughout the world.

“The value of coming out in nature is to get away from all of the typical things that you’re worrying about in your day. What a beautiful experience to be able to hear the water babbling behind us and the birds calling,” says Gill, who is originally from Canada. “It can give you an amazing sense of peace and also connectedness to something bigger than ourselves.”

Asylum Lake Preserve and the adjoining property lie in the west fork of the Portage Creek Watershed. The land was ensured when WMU constructed its nearby College of Engineering Parkview Campus. An online “story map" offers a self-guided introduction to the preserve and its history.

The preserve serves as a research area for academic disciplines such as geology, hydrogeology and environmental studies, but it is a particularly wonderful place for birdwatching, Gill says.

Asylum “does offer a really nice set of features and different natural areas. So, we can go to Big Asylum Lake and Little Asylum Lake,” says Gill. “We can walk through the forest and engage with the organisms here. And then there’s also the prairie. We have three important types of ecosystems in the area, making it a really nice place to walk and experience nature.”

About 450 bird species call Michigan home, according to the Michigan Bird Records Committee’s January 2020 list. Right now, many species that departed for the winter are migrating back to the area, which offers birders plenty of interesting activity.

Experienced birdwatchers enjoy grabbing their binoculars, identifying as many species as they can and perhaps conducting counts, “but if you don’t have that bird knowledge, you can still experience the joy of birds just by walking here and listening,” says Gill. “If you’re listening here, there are blackbirds calling, there’s robins singing, there’s woodpeckers, the red-wing blackbird. All of those things you can listen to. You don’t have to name them to get the joy out of experiencing them. You could become somebody who’s really active and knows their birds, but if you’re not one of those people right now, certainly don’t let that stop you from enjoying birds because you have all you need to enjoy them: your ears and your eyes.” 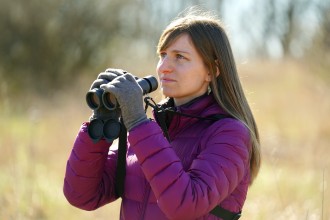 The best times to birdwatch, according to Sblendorio, are at dawn and dusk.

“The dawn chorus is just spectacular, right when the sun comes up,” Sblendorio says.

Wearing colors that blend with the scenery are advisable, but not nearly as important as quiet observation—no sudden movements and full concentration.

“Birdwatching is an activity in mindfulness,” says Sblendorio, a New Jersey native who became captivated with birds while helping a master’s student study them on a military base. “You’ll see flashes of color, the rustle of leaves. It’s an opportunity to appreciate the world.”

Some birds, such as chickadees, are loud. Cranes are graceful. Fox sparrows “have a really cute whistle,” Sblendorio claims. She calls warblers “little forest gems” that range in hues from yellow to blue to rusty red.

Certain species are just passing through the area right now, while others will plan to stay for the duration of summer.

During their recent lake preserve visit, Gill and Sblendorio were entertained by a bluebird couple creating a nest in a box built by people for that purpose. Their task wasn’t easy. While the female deposited beakfuls of grass into the box, her mate was busy fending off swallows, which were also diving to gulp the first flying insects of the season.

Another good reason to take up birdwatching: Species throughout the world are in rapid decline, Gill points out. According to a September 2019 article in Science Magazine, the Western Hemisphere has lost more than one in four birds during the past 50 years. Cornell University researchers calculated North America is home to nearly 3 billion fewer birds today compared to 1970. Even traditionally common species such as Baltimore orioles and barn swallows are seeing drastic population decreases.

The causes are many. Some of them include climate change, reduction in habitat due to human activity, skyscrapers, pesticide use and outdoor cats.

Gill and Sblendorio’s research and field studies partly focus on the effects of human-generated noise, which can negatively affect bird migration and breeding. 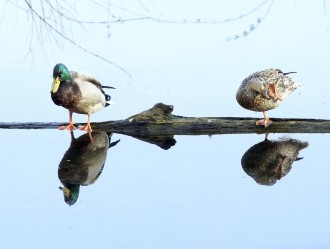 Ducks and waterfowl are seeing less of a decline because of concerted conservation efforts, even those meant to support hunting, Gill says.

“When we invest in conservation, we make a difference,” says Gill. “There’s an inherent value in nature, and other organisms have a right to be here just like we do.”

For those interested in buying their first set of binoculars for bird watching, Sblendorio suggests a seven or eight magnification.

Bird identification books are also there for the buying, but there are also several websites and mobile applications to use. Sblendorio and Gill suggest visiting “All About Birds” by Cornell University, and the Merlin Bird ID app that’s affiliated with Cornell.

Practical bird conservation activities are detailed at 3BillionBirds.org. The site lists ways anyone can help reduce the rate of bird decline, such as modifying windows to be less reflective, growing native plants, keeping cats indoors, drinking coffee that’s cultivation-friendly to birds and reducing plastic use.