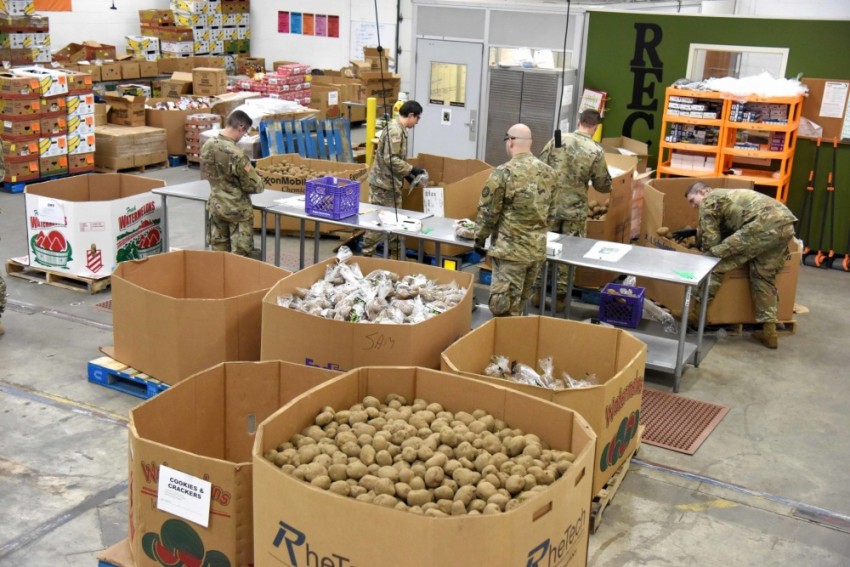 PONTIAC, Mich.—Feeding the growing number of Michiganders in need during the COVID-19 crisis is no small task. 2nd Lt. Hunter Davidson and his team of Michigan National Guard soldiers are up to the challenge. Initially scheduled for annual training in Morocco, the global pandemic shifted their plans. 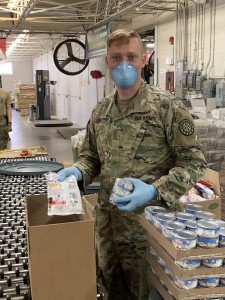 “We were used as a quick deployable unit to do anything that the state would need” for COVID-19 response, says Davidson.

His team from the 1433rd Engineer Company began work at the Feeding America West Michigan Food Bank in Comstock Park in late March. They packed emergency boxes full of food for smaller food pantries to distribute to Grand Rapids-area families. Davidson also had a chance to facilitate two drive-up events, where the team distributed boxes to hundreds of people in their cars.

“It was really nice to be out in public and actually see the people who we were putting the food together for,” he says.  “Part of the reason we joined the guard was to be able to give back to our neighbors. We are also civilians ourselves most of the time, so being able to serve our communities is really important.”

A little more than a week into their orders in West Michigan, Davidson’s 10 soldier unit was deployed to Pontiac. They’ve spent the past few weeks at a food bank in Pontiac, assembling 1,000 quarantine boxes per day for senior citizens.

“Packing boxes isn’t easy; it’s pretty difficult. But, at the end of the day, we all know it’s for a really good cause,” Davidson says, estimating his team has assembled more than 400,000 pounds worth of food boxes. “We’re helping thousands of people.”

A TRADITION OF SERVICE 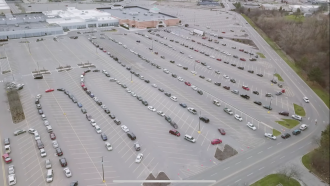 Aerial photo of cars at a drive-up distribution event at Woodland Mall in Kentwood, Michigan.

Davidson knew early on he wanted to serve in the military. The son of a Michigan National Guard officer, a sense of duty to his country was in his blood. He chose Western Michigan University, across the state from his hometown of Croswell, specifically for the ROTC program.

“I knew Western had the best ROTC program in the state,” he says. “My wife, Rachael—my girlfriend at the time—got into the occupational therapy program at WMU, which also was the best in the state. It just worked out.”

While participating in the ROTC program, Davidson explored several possible fields of study—from biology to education—before he chose political science. After graduating with a bachelor’s degree in 2019, he landed a job as a manager at Amazon right away. That job, paired with the experience he gained at WMU, set him up for success in the uncharted territory he’s leading his team through now.

“The ability to remain resilient, flexible and handle all of the changes that have been happening throughout this COVID-19 crisis, Western really helped with that,” says Davidson. “Everything changes here every single day. So, if I wasn’t resilient or able to adapt, it would be pretty difficult.” 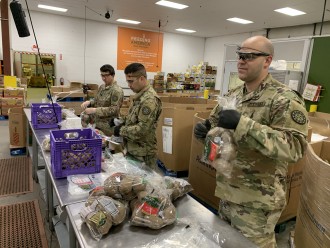 That innovative and adaptable mindset helped Davidson lead a reorganization effort at the food bank’s warehouse that doubled production ability, from 600 to more than 1,200 boxes per day.

“The benefit of the National Guard is you have people from all walks of life that work in (industries like) manufacturing or engineering or operations. So, we’ve been able to come in and all the civilians where we’ve worked have been blown away with how efficiently we’re working and how fast we’re able to do our job.”

Davidon’s team will continue providing critical support to food banks through the end of May, wrapping up more than two months of service.

“We’ve been extended a few times. They keep asking who wants to keep going, and we keep volunteering.”