Contact: Erin Flynn
May 22, 2020
Video of The Resilient Project
KALAMAZOO, Mich.—Dramatic gestures of heroism are unfolding across the country as medical professionals risk their lives to care for others during the pandemic. Now, Broadway stars are bringing their own dramatic flair to honor those frontline medical workers. The Resilient Project, spearheaded by Jay Berkow, director of music theatre performance at Western Michigan University, and composer/lyricist Dave Ogrin, unites a star-studded company of more than 60 performers with doctors and nurses from across the country. Participating from emergency rooms, critical care units and even their own living rooms, they join together to sing Berkow and Ogrin's song, "Resilient." 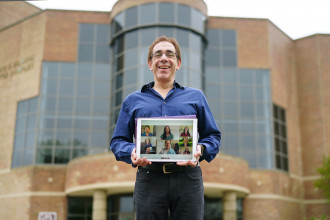 "It's a powerful ballad about finding positivity and triumph out of a disastrous situation," says Berkow. "It's intended to show that you have to fight for positivity."

The project itself is a product of resilience. Having worked together on a rock-opera called "Mata Hari" for the past few years, Berkow and Ogrin were ready to debut it for potential investors in New York before the pandemic inserted an abrupt intermission.

"When the reading was canceled, David and I were talking about how 'Resilient' (a song from the musical) actually has a really strong message for health care workers," Berkow says. "We decided to donate the song to organizations to use as a fundraiser." 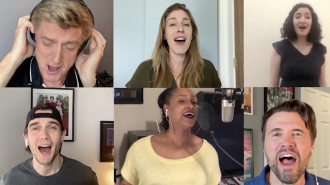 "Given the unprecedented impact of this crisis, which is still unfolding, our goal was to salute the true heroes who are at the forefront of the battle for human lives. The tireless health care professionals—doctors, nurses, hospital personnel—who are literally risking their lives every day to take care of all of us," Berkow says. 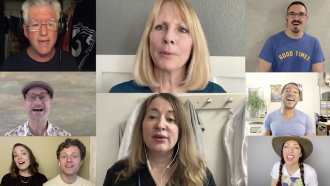 The team wanted to feature some of those heroes, so they reached out through friends and family and recruited several doctors and nurses to show off their singing talents on the video as well. They represent health care facilities from across the country, from New York to New Mexico. The video will benefit their colleagues through the American College of Physicians, Broadway Cares/Equity Fights AIDS' COVID-19 Emergency Assistance Fund and the Emergency Nurses Association.

"I just love that we are singing along with health care providers and frontline responders through this whole thing," says Sandberg. "I love how it creates a sense of community that we're all in this together, and we're so obviously indebted and grateful for the work they're doing."

"I couldn't believe that this song was written years ago before all this hit, because the lyrics line up so perfect.y with what we're all feeling in some capacity," adds Connaghan. "It's basically a beat that you're feeling in your body and it's kind of taking you through the day. It's motivation for me."

Seemingly overnight, a fundraising idea snowballed into a massive project. Todd Tuchek, a 2015 WMU music theatre alumnus who now works for NBCUniversal in Los Angeles, volunteered his video editing talents to turn more than five dozen individual clips into a polished, synchronized music video. Tuchek estimates he dedicated about 72 hours to the project—a challenge motivated by his own personal experience.

"My mother was an emergency room physician assistant when I was growing up, so I know firsthand how demanding those jobs are without [the added stress of] a national pandemic." Tuchek's mother is currently the head physician assistant at an urgent care facility in St. Johns, Michigan, which he says is overwhelmed with patients right now. 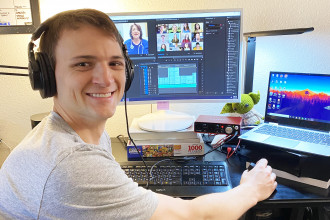 Todd Tuchek works on the video at his editing station.

He's also watched his own industry uprooted by COVID-19 production cancellations, and says this project was the least he could do to inspire and encourage others during a national crisis.

"We are all in this together. If we all sacrifice something we took for granted before the outbreak, we can—hopefully—return to a form of normalcy."

The video is already having an impact around the globe.

"I hope ... it shares the mission of the fundraiser but also shares the essence in the sense of building community and being in this together—that in greater numbers we can be strong and get through this together," Sandberg says.

Berkow says he's received messages from health care workers as far away as Pakistan who were moved by the lyrics.

"Through history, through all these major crises we've had, people always turn to artists. They're looking for inspiration, emotion, whatever it is," Connaghan says. While artists can't help physically on the front lines in emergency rooms, they can raise awareness and money and join people together. "That's just the start. Once that's all in place, you keep going. I think this is the domino that starts the effect."

"The more nurses and doctors who actually see it and say, 'Okay, I'll go back into the hospital for one more day,' that makes a big difference.”