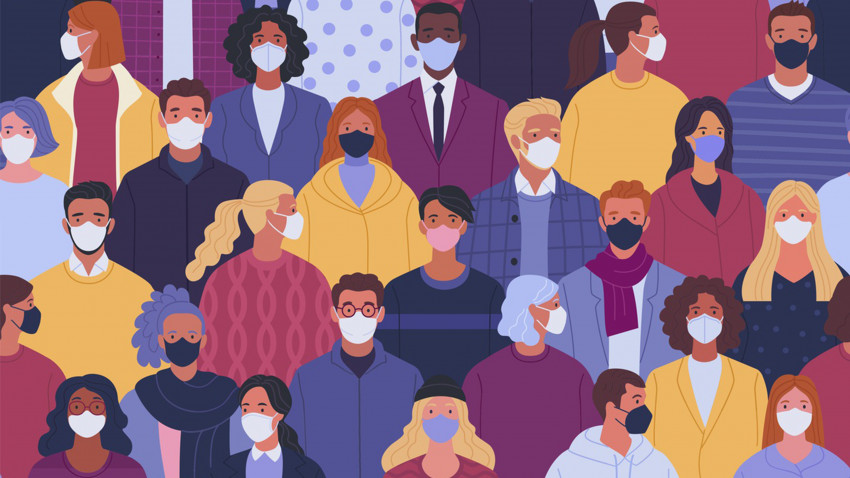 The CDC recommends wearing cloth face coverings to mitigate the spread of COVID-19.

KALAMAZOO, Mich.—Using cloth face masks slows the spread of COVID-19. That's the consensus from the Centers for Disease Control and Prevention as well as a number of leading medical organizations around the world. Yet, as communities across the United States begin to slowly lift coronavirus-related restrictions, calls to wear masks have received pushback.

"A lot of people just don't want to wear them. They think it's an infringement on their liberty," says Dr. Fritz Allhoff, philosophy professor at Western Michigan University, who argues masks are not about individuals at all. "The reason you wear a mask is not only so you don't get sick. The reason you wear a mask is to slow the spread of the virus and make you less likely to transmit the disease to someone else. The masks are to make everyone safer."

One reason for early skepticism regarding the merits of masks is that messaging has changed as scientists learn more about COVID-19.

"Things that are obvious now (weren't always). We now know the virus is transmitted by respiratory particles, so obviously a mask would help. But two months ago, that wasn't obvious to anybody."

In fact, over the past month, studies published in the “Proceedings of the National Academy of Sciences of the United States” and “Nature” reveal that in the absence of a face covering, normal speech generates thousands of droplets every second, each potentially holding millions of viruses per milliliter in an infected person. Those droplets can remain in the air for “tens of minutes.”

In addition to developing scientific knowledge, an ideological divide in an already contentious election year is also fueling distrust in mask messaging. President Donald Trump chooses not to wear a mask while his presumptive opponent, former Vice President Joe Biden, has been photographed in public with his face covered.

"There are a lot of ways in which Michigan has been a microcosm of this whole thing. The governor has been shortlisted for Joe Biden's vice president. She's received a lot of national attention and even been portrayed on Saturday Night Live. That's not an accident. Michigan is a swing state … and this is going to be very politicized."

Digging below the surface politics of mask-wearing, a much more complicated picture emerges. Protests in Lansing against stay-at-home orders and business shutdowns drew headlines first, and now demonstrations regarding racism and police brutality again show large crowds of people gathering during a time when epidemiologists say distance is crucial to stop the spread of COVID-19.

Allhoff foresees a COVID-19 vaccine creating a similar flashpoint between individual autonomy and public health. With the advent of a vaccine, there will be a push for everyone to be inoculated to slow the spread.

"But there are a lot of people who might refuse," he says. "What's going to happen when schools say you can't send your child without a vaccine?"

Whether or not someone dons a mask in public also boils down to simple human behavior. The immediate inconvenience masks can create—fogging up glasses and making breathing and speaking incrementally more challenging—might outweigh the probable positive effects.

“There’s no guarantee that you’ll prevent a COVID-19 infection via a mask,” says Dr. Wayne Fuqua, professor of psychology. “Under those circumstances, immediate consequences often win out over delayed, cumulative and probabilistic consequences.”

In order for those delayed consequences to prevail, Fuqua says social reinforcement or other “contrived” consequences are needed to promote the desired behavior. As a member of a national Behavioral Science Response to COVID-19 Working Group, he’s worked on similar messaging campaigns aimed at changing human behavior to reduce the spread of the virus. The group has created science-based materials to reduce face touching, encourage social distancing and promote hand washing.

Another motivating factor could be focusing on the impact of a person’s behavior on those around them. Refraining from smoking in public could be seen as an infringement of civil liberties or as a courtesy to reduce health risks for others. Allhoff takes that thinking a step farther.

"The one freedom you don't have is to negligently infect other people," he says. "You do not have the freedom to put other people at risk.”