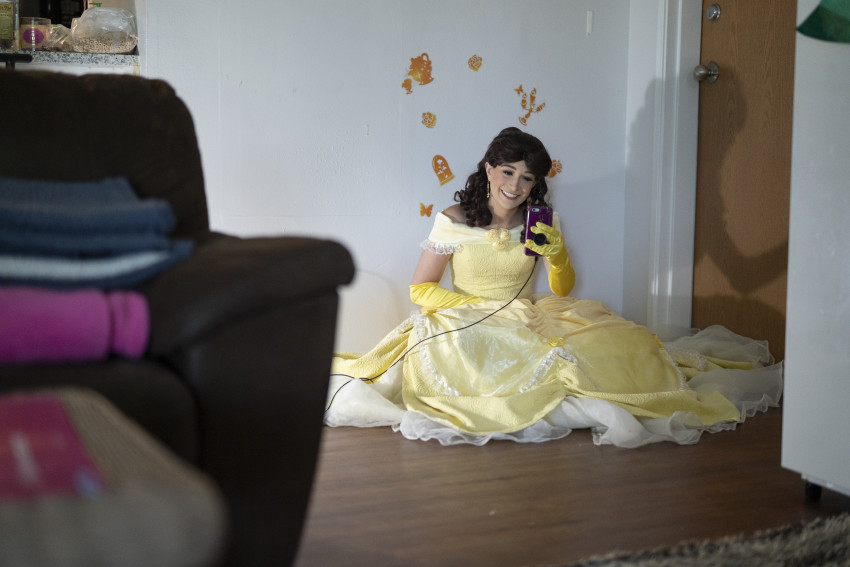 Peyton McLellan, A Moment of Magic WMU chapter president, sits on the floor of her apartment dressed as Belle during a hotline call.

KALAMAZOO, Mich.—For more than two years, a committed and magnanimous group of Western Michigan University undergraduate students has been brightening the lives of some of the sickest children in Southwest Michigan by bringing to life their favorite superheroes, princesses and other fictional characters. Rather than halting those efforts, the COVID-19 pandemic has instead provided A Moment of Magic—AMOM—members with even more incentive to continue.

The University’s AMOM chapter, which was established in fall 2017 and was one of the first in the nation to form, was already using digital tools to occasionally visit with children from a distance rather than at hospitals, their homes or events, according to chapter President Peyton McLellan. Those creative online methods, many of which involve collaboration with other chapters across the country, ensure their influential work isn’t halted.

Traditionally AMOM members, which include characters and “magic makers” who assist characters and provide supplemental behind-the-scenes interaction with family members of children, have made free in-person visits to youth with serious medical illnesses. The national organization’s mission is to restore the magic of believing at a time when a child needs to just be a kid and remind them to be brave, strong and fearless.

As the pandemic continues, chapters are finding they can still uphold that mission and even enhance and expand it in some ways.

Hotline calls are one primary way the group is initiating and maintaining connections.

“We have increased the number of hotline calls we do by 60%,” says McLellan. “These hotlines are 30-minute FaceTime calls with any of our characters. Each day, we have five characters call from the 22 different AMOM chapter volunteers.” 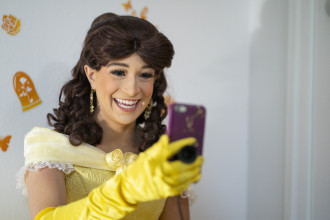 Caregivers can sign their child up for a hotline call on the AMOM Foundation Facebook page. The organization has also been providing live character and magic maker programming on Facebook, which feature book reading, crafting, teaching a dance and other activities that promote creative play.

“AMOM has also started livestreaming directly into hospitals,” McLellan says. “A couple of weeks ago, another chapter president and I livestreamed into a children’s hospital and were able to reach so many children.”

Additionally, WMU’s chapter and others throughout the country are working on providing community relief. Some initiatives include:

“Overall, A Moment of Magic is still able to live out its mission because of our dedicated volunteers,” McLellan says. “I never for one second thought AMOM would halt indefinitely. AMOM’s volunteers and our leaders are some of the strongest people I have ever met. Our strength comes from our fighters and we will do anything to reach them.”

AMOM began with two New York college students. Influenced by the world of pediatric cancer, they decided to dress as popular fairy tale princesses to put smiles on patients’ faces. “They learned about the lack of funding, the harsh treatments, and began to form extremely close bonds with the kids they met,” the foundation’s website explains. The Princess Project was born, which evolved into AMOM.

Chapter members are required to undergo rigorous training before they embark on visits and even raise funds to pay for their custom-made costumes, which can cost as much as $400. Members say their AMOM activities are immensely rewarding, but they can be emotional and difficult at times; many of the children they meet are in the final stages of terminal illness.

Audrey Vanessen, who graduated with a Bachelor of Science in occupational therapy in 2019 and is now working on her master’s degree at WMU, founded the local chapter because she thought such volunteerism “would really make a difference.” 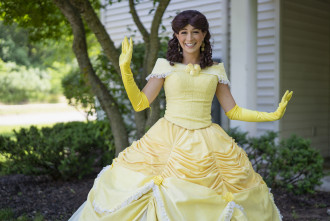 “With A Moment of Magic, you get to see little miracles every day, and that’s what’s so unique about it,” she says.

The WMU chapter began with five individuals and was one of only 10 in the U.S. selected by the national foundation to organize based on students’ potential for dedicated and passionate participation. The group now has more than 100 members that feature established characters and even those created based on children’s ideas.

Vanessen recalls an experience with one particular family whose child was battling leukemia. The girl “had just started treatment,” she says. “When we met her, she still had all of her hair, but it was really affecting her personality. I went in with one of the other volunteers and she smiled. Her mom started crying, looked at us and said, ‘That’s the first time my child has smiled in months.’ I think that was probably the moment for me that instilled the idea that it was all worth it. That was my moment.”

Vanessen and the girl formed such a strong bond that their visits continued for more than two years. The child survived leukemia and the two still stay in touch.

Former WMU AMOM President Cassidy VanGilder remembers planning to meet a child during the family’s end-of-life celebration for her. VanGilder’s mother had sewn a special princess costume for the girl, but the child died the day before the celebration.

“The family still asked us to come out and they still held the celebration of her life. It was a ‘let’s remember her, let’s be happy because there are still things to be happy about' celebration. I get goosebumps when I think about it,” VanGilder says. “That is one of those moments where I realized we are making an impact. We have the ability to bring joy at a time when many people would struggle to find it.”

“Going into something like this, you see the beauty of it. But what you don’t see at first are the relationships that you can build” and that stay with you, Vanessen says. “It’s meaningful and it makes a difference.”

Vanessen says she has enjoyed seeing the chapter grow, and notes she grew with it.

“That’s been a really special thing to watch and be a part of and lead. It’s taught me so much about being a leader but also about who I am as a person, who I want to be in my professional career and what kinds of kids I want to work with,” says Vanessen.

“My journey with AMOM has completely changed me into someone I love to be,” she says.

To donate to the WMU AMOM Chapter, visit its website.