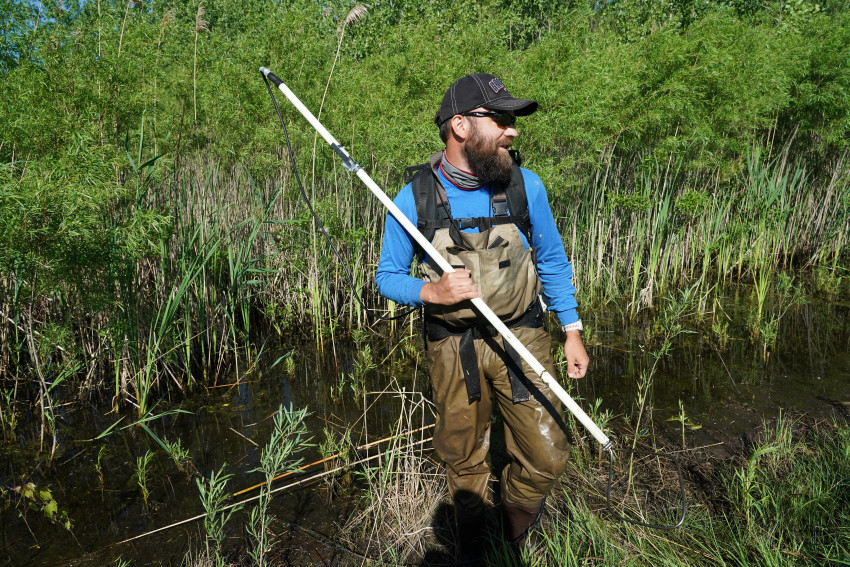 Adam Austin wades through a wetland while conducting field research.

KALAMAZOO, Mich.—Eyeing a career as an English teacher, Adam Austin probably never imagined how much he'd rewrite his own story when he graduated high school in Allegan, Michigan, in 2008. Currently a graduate biological sciences student leading a wetland research project at WMU, he began his Bronco journey more than a decade ago planning to major in English and theatre design. A few years in, though, he began to realize donning waders and collecting tadpoles was more his midsummer night's dream than Shakespeare.

"I think like a lot of young kids, I had talked about being a marine biologist," he says. "When I was in high school, I looked into becoming a DNR officer or something like that, but then somehow that didn't translate to what I went to college for initially."

Nearly finished with his English degree, Austin chose to enlist in the Navy. 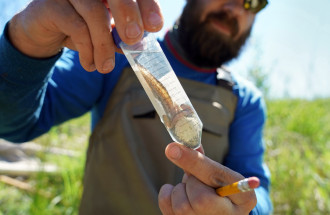 Austin and his team are careful to do as little harm as possible, collecting creatures like this tadpole to catalog and then release back into the wetland habitat.

"Western gave me the opportunity to pursue a passion," says Austin, which he was able to discover once he had "taken a step back and started to look at things from a distance—even if that distance was 2,000 miles away."

Austin was able to complete the bulk of his degree, class by class, while he was in the Navy. During that time, he also discovered his appreciation for the natural resources back home.

"I was deployed to the Middle East twice, and I looked around and all I saw was sand, sand, sand. And I visited plenty of countries in Europe and started to realize how rare it is to have abundant freshwater resources," he says. "I came back to Michigan and started looking at these natural resources and thinking about how I can conserve them, how we really recognize their value, and biological sciences and environmental studies just really seemed like the way to go."

Austin saw his passion grow in Dr. Tiffany Schriever's lab, where he worked as an undergraduate on some of her wetland research. With G.I. Bill funds still available after finishing up his English degree and earning a second bachelor’s degree in biological sciences and environmental studies, he saw an opportunity to get more experience in the field by continuing his work at WMU. Now he’s on track for a doctorate while picking up a master's degree along the way. 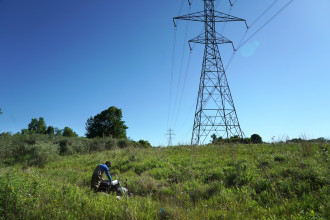 "What draws me back has always been the faculty who have been incredibly supportive with everything I've been doing, who have taken a lot of interest in my research or in me as a student," he says. "That doesn't feel like it's that common. I don’t know if I would get that at other colleges or universities."

The community is stepping up to help Austin get his current research project off the ground, which involves determining whether human-made wetlands created to offset development function in the same way as their natural counterparts. It was among the first field research projects approved by the Office of Research and Innovation in the wake of the COVID-19 pandemic and will be used as a model for the restart of research across campus. With undergraduate students currently learning remotely for the summer, some fellow graduate students and Schriever herself have volunteered to help fill in for those students he'd initially planned to include.

"It was really cool to see them step up, drive all the way from the other side of the state (in some cases) just to be able to come and help support the research. Even my advisor, Tiffany Schriever, is getting her hands dirty to try to make this happen," he says.

Since the 1980s, federal law has required developers to create mitigation wetlands to offset any construction or development in a natural wetland area. Those habitats can be in remote areas and require traversing challenging terrain. 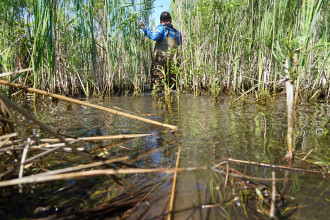 "It is hard work. You're out there for eight hours, sweating through your waders, trudging through mud and muck,” he says. “Last week was a 300- or 400-yard walk through brush to get to the wetland carrying 100 pounds of equipment.”

The hard work has the potential to effect real change and inform future wetland creation to restore and create habitats.

“They’ve been building these wetlands to replace natural ones that are hopefully going to support a lot of very vulnerable species into the future, even as we’re dealing with things like climate change. So, it’s really important to see whether or not we’re getting this right."