Freshwater studies graduate already making a splash in his field

"What I love most about the water is it contains a whole new world beneath its surface," says RJ Bolzman, who earned a bachelor's degree in freshwater science and sustainability.

KALAMAZOO, Mich.—Since he was a kid, RJ Bolzman has been called to the water. Swimming, boating, exploring—it's always been a passion. Pursuing a bachelor's degree in freshwater science and sustainability at Western Michigan University allowed him to channel that passion into purpose.

"There's so many different ways to expand on the degree. It gave me a good baseline to see what I want to do," says Bolzman, who officially becomes a WMU alumnus Saturday, June 27. While the pandemic canceled traditional plans to mark the occasion walking across the stage at Miller Auditorium, he figured out the perfect way to usher in the next wave of his career—donning his cap and gown on a paddleboard in Higgins Lake in Roscommon, Michigan, where his freshwater education began.

Bolzman celebrated graduating on his paddleboard in Higgins Lake.

"We had a little picture ceremony with family out by the water," Bolzman says. "It was really cool to have my grandmother down there watching me."

Pandemic or not, Bolzman's path to a degree has been anything but traditional. It was important to him to do things his own way.  WMU offered that flexibility with a curriculum that allowed him to take classes remotely.

"Everything was either online or my professors drove up and met me at the Traverse City campus, which was fantastic," he says.

The nature of freshwater science lends itself to learning outside the classroom. That's where Bolzman says he had his most impactful experiences.

"I remember my fish biology class and being out in the field. Dr. Devin Bloom was scooping fish up. It was really fun. We were out with waders, right in the field the majority of the time,” he says. In another course focused on human impacts on the Great Lakes ecosystem, the professor held class on a research vessel.

Bolzman also brought a lot of experience to the table in his classes, drawing on what he's learned as a diver for the Higgins Lake Foundation the past five years. Working on a diver-assisted suction harvester, or D.A.S.H. boat, he spends his summers hand-harvesting Eurasian watermilfoil, an aquatic invasive plant species.

"About 10 years ago we saw a very large increase in the amount of growth that the lake was taking in. The milfoil was growing so tall that it was actually interrupting swimming and boating. It was taking over the native habitat," Bolzman says. "We're pulling it because the more it grows, it could completely cut out the sunlight to everything beneath it."

His work with the D.A.S.H. boat in Higgins Lake is a test case for the state in using this particular hand-harvesting technique to root out invasive plant species in bodies of water. It could inform future policies and practices recommended by state agencies. 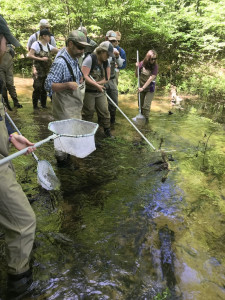 Bolzman's most impactful experiences at WMU happened when his classes moved into the field.

"It's been pretty neat being a part of something so specific already, and then finding a degree through Western to further that knowledge has been fantastic," he says.

While he didn't have a typical college experience, the versatility of his coursework and commitment of faculty ensured Bolzman never felt like a fish out of water at WMU.

"I learned a lot more than I thought I was going to from it all, and I definitely can say it was an awesome experience," he says. "I had really good communication with everybody. My professors expressed a lot of interest in my work at Higgins Lake, and it was really cool to have that back and forth."

His journey at WMU also helped him put his purpose into perspective.

“What drives my passion is that all living things that make up this earth need water to survive, and I want to protect our precious natural resources,” he says. “The most beneficial thing I learned at Western was I am only one of many individuals on the path to help do that.”