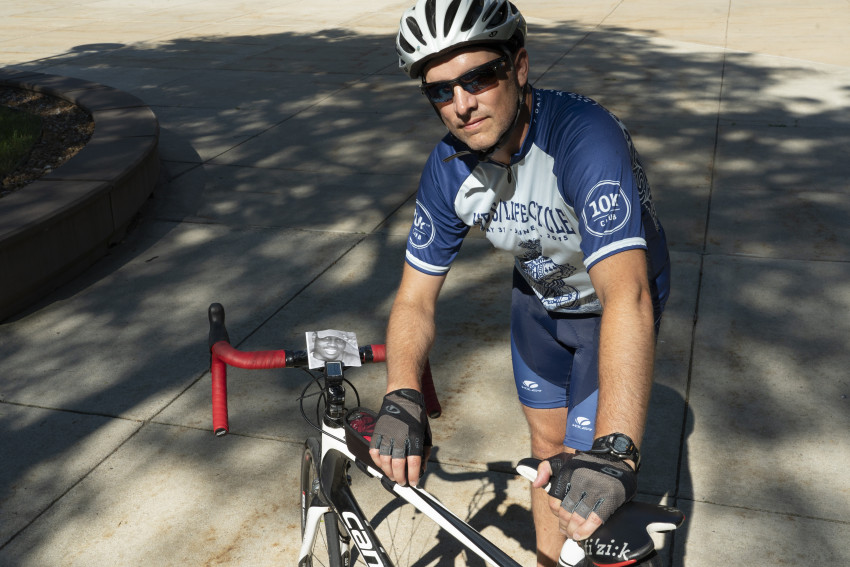 Greg Jasperse plans to bike 1,000 miles and raise $10,000 this summer for the NAACP Legal Defense and Educational Fund. He dedicates each of his rides to a Black American who has been killed, taping the person's picture to his handlebars so he can reflect on their story.

KALAMAZOO, Mich.—Pedal by pedal, mile by mile, Greg Jasperse is on a journey of understanding. The Western Michigan University director of vocal jazz and Gold Company is taking note of systemic racism and injustice facing the Black community by biking to raise money for the NAACP Legal Defense and Educational Fund. It's an idea that came to the avid cyclist while he was out for a ride shortly after the killing of George Floyd.

"I'd had a lot of conversations involving (Floyd's death) and racism with friends and with our students at Western in the jazz department, and you get out on the bike and the endorphins start pumping and the wheels start turning in your mind. I thought, 'What if I did a challenge to myself?" says Jasperse, who has participated in a number of long-distance rides to raise awareness and funds for HIV/AIDS and LGBTQ rights in the past and had been thinking about other charitable efforts to get involved in.

He set an initial goal of riding 1,000 miles and raising $10,000 by Labor Day. Having already nearly met the goal by the July 4th holiday, he's on pace to far exceed his own expectations.

"My first ride for this whole thing was the day of George Floyd's funeral. I rode 46 miles to honor the 46 years of his life and that just made that ride meaningful. It gave me something to reflect on while I was out there," he says.

Every ride since has been dedicated to a life lost. Ahmaud Arbery. Breonna Taylor. Elijah McClain. Jasperse prints a photo of the person and tapes it to his handlebars, reflecting on their story and riding a mile for each year he or she lived. 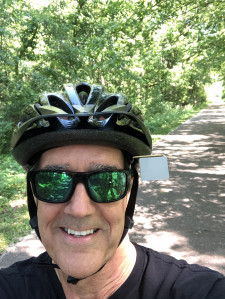 "When I think about how we are going to move through this incredibly hard conversation and transition into a different world, I think it can't happen unless people have the capacity for empathy and the willingness to work in coalition with each other," he says.

Just a few weeks in, word has spread about his endeavor and more riders have joined Jasperse's Biking4BlackLivesMatter team. That includes WMU dance professor David Curwen as well as cyclists in Maine, Iowa and Washington state.

"Knowing that my rides are part of a larger group and purpose (gives) me extra incentive to go on longer rides and to ride on certain days when my body is saying it's time to rest," says Curwen, who has set an initial goal of raising 25 cents for each mile he rides until Labor Day. He started biking at the beginning of the pandemic as a therapeutic release of sorts and was motivated to join Jasperse's cause as a way to do some good with his new pastime. "(I came to) the realization that my social conscience had to shift. The national protests concerning Black Lives Matter and police brutality and institutional racism had a profound effect on me."

Jasperse sees this endeavor as the first step on his journey toward understanding the injustices facing Black Americans and his role in unintentionally perpetuating them.

"I had to come to terms with what I felt my responsibility was and then find a way to mobilize and engage my power," he says. "I feel like for those of us who are engaged in the waking-up process of our role in all of this, that's a big next step—to figure out where your sphere of influence is, where your power is and how you can use that in an anti-racist way to really reverse racist policies and racist power."

This journey has brought Jasperse's relationship with one of his students full circle. He met Faith Quashie several years ago as a young high school student at a vocal camp in upstate New York. Through his coaching, she realized she could channel her passion for jazz music into a career.

"Everything that I know, the written version of jazz music, he has taught me. He has done wonders for my career and my voice and shaping me as a person, and I appreciate that," she says. 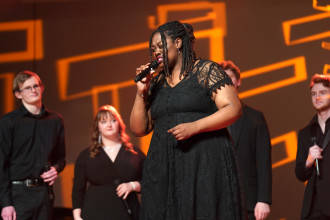 The close relationship Quashie and Jasperse have fostered over the years reached a new level as the high-profile killings of Black Americans began to dominate the national discourse. Quashie and some of her peers challenged their jazz studies professors to stand up and denounce racism and support students of color.

"It really meant a lot to us that they reached out," Jasperse says. The Jazz Studies Program held a Zoom meeting to listen to student concerns and learn how to do better. "It was a tough one. There were tears from a lot of us, but it was a really important conversation."

"It has strengthened our student-to-teacher relationship, our musician-to-musician relationship, all of it. It makes it easier to communicate with him and express how I feel,” Quashie says. “When I say, 'Hey, this isn't working for me,' he says, 'Okay, let's find another path.' Or I could say, 'Hey, Greg, this is what I think you should do to be a better white ally.' I can say those things to him because our relationship has been growing for so long, and I think I am getting a great education here at Western."

She's also working on a project to help the Jazz Studies Program identify areas where it can better support students of color and represent the historical and cultural roots of jazz in curriculum.

"It's been super humbling working on this project, and I know my professors are going to absorb it open-mindedly. I really appreciate it. That's the great thing about having professors like that, because we can have conversations like this all the time," Quashie says. "It may be difficult for me and them, but at least I'm grateful to have it, because I know there are a lot of other students who go to different universities where this is not possible."

When Jasperse first started his cycling fundraiser, he had no idea the impact it would have on his life. From the first ride, however, the conversations and connections he's made in the community have been eye-opening and life-changing.

Along his cycling routes, he's talked with several Kalamazoo community members about their experiences and shared stories of lives lost along the way. 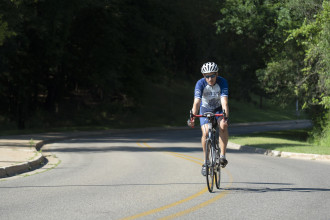 "A couple weeks ago some colleagues of mine in the School of Music wanted to ride with me. They've got little kids, so we did an 11-mile ride around the neighborhoods, and that ride was for 11-year-old Carol Denise McNair who was one of four girls who died in the Birmingham, Alabama, church bombing (in 1963)," Jasperse says. "One of the girls on the ride with us is 11, so we were just sharing the story with her. And it brings up an opportunity to raise awareness and have dialogue with more people than we probably would have otherwise."

What he's learned on this personal journey will also have an impact in the classroom moving forward. He's exploring ways to deepen what he teaches and connect it more to the history of the music as well as enable and empower students to use their own creative power and tools to provide commentary on what's happening in the world right now.

"I'm sort of living the Maya Angelou quote, 'Do the best you can until you know better. Then when you know better, do better,'" says Jasperse. "I'm really committing to learn a lot more about systemic racism, my role in that, the role I've played unknowingly and how to more consciously adjust my behavior and my participation in all that."

"I'm so proud of him for doing this. I know he's on a specific journey to learn how to better serve the community of people like myself, and I think he'll get there. I think he's on the right track. I think a lot of the other faculty are on the right track," Quashie says. "It always starts with the first step of being aware and the second step of following through. The third step is everything else that comes after that."

More information about Jasperse's fundraising effort is available on the Biking4BlackLivesMatter GoFundMe page.